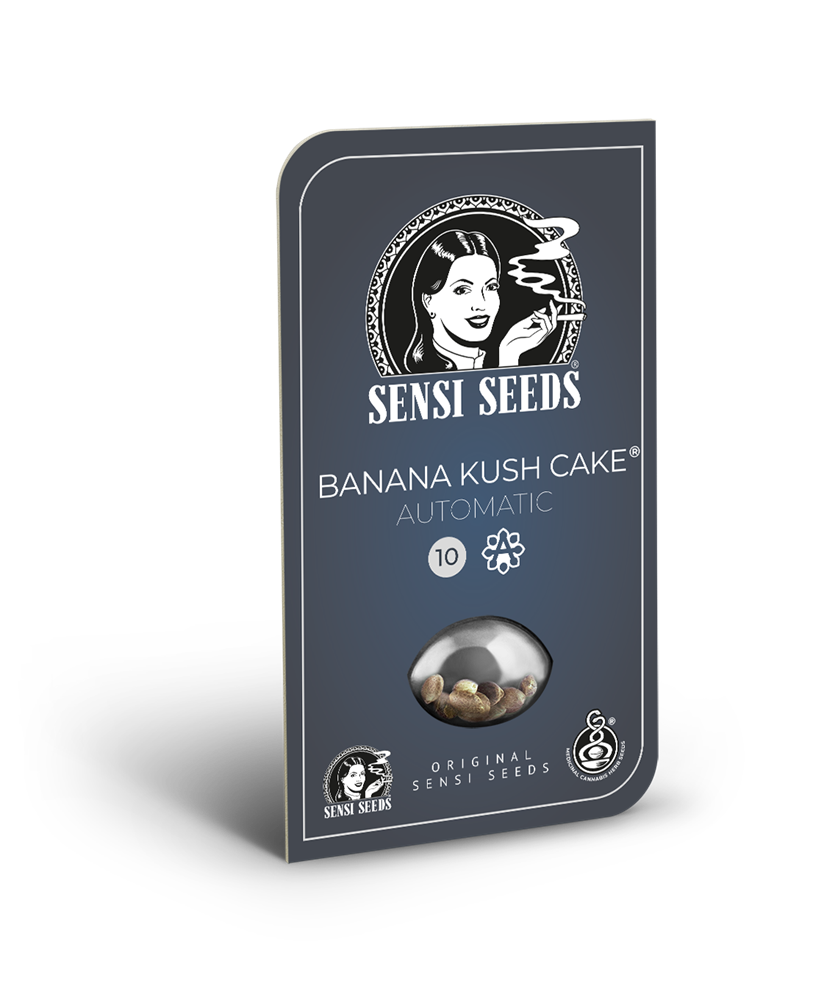 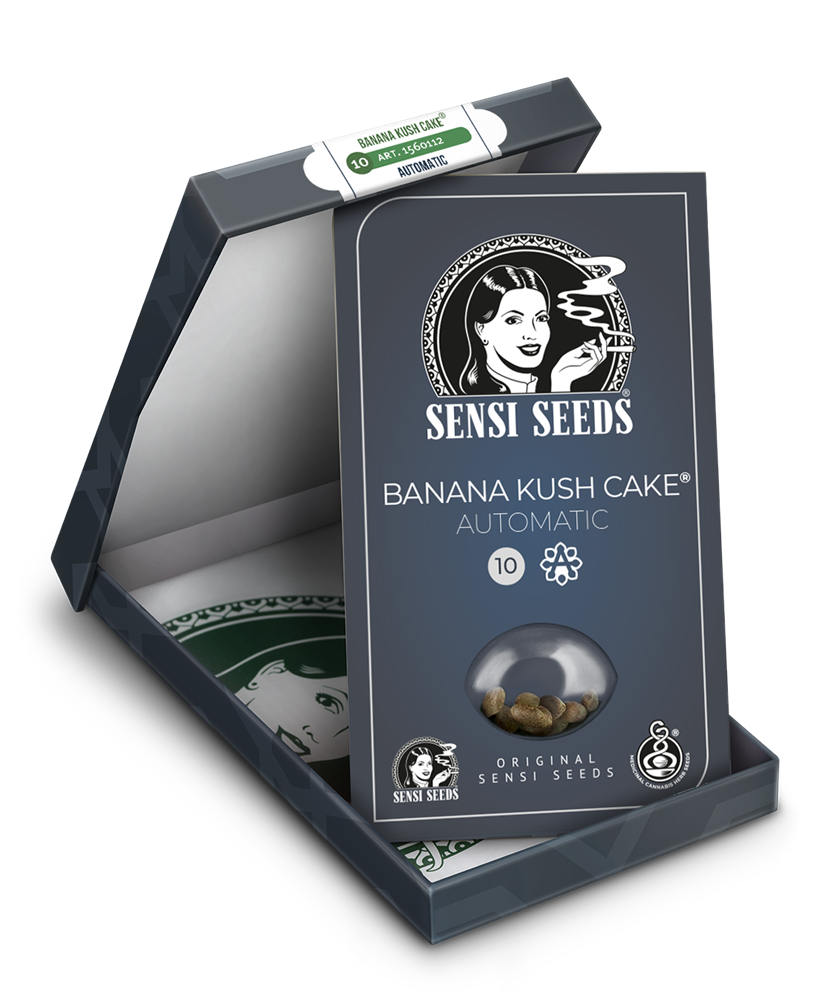 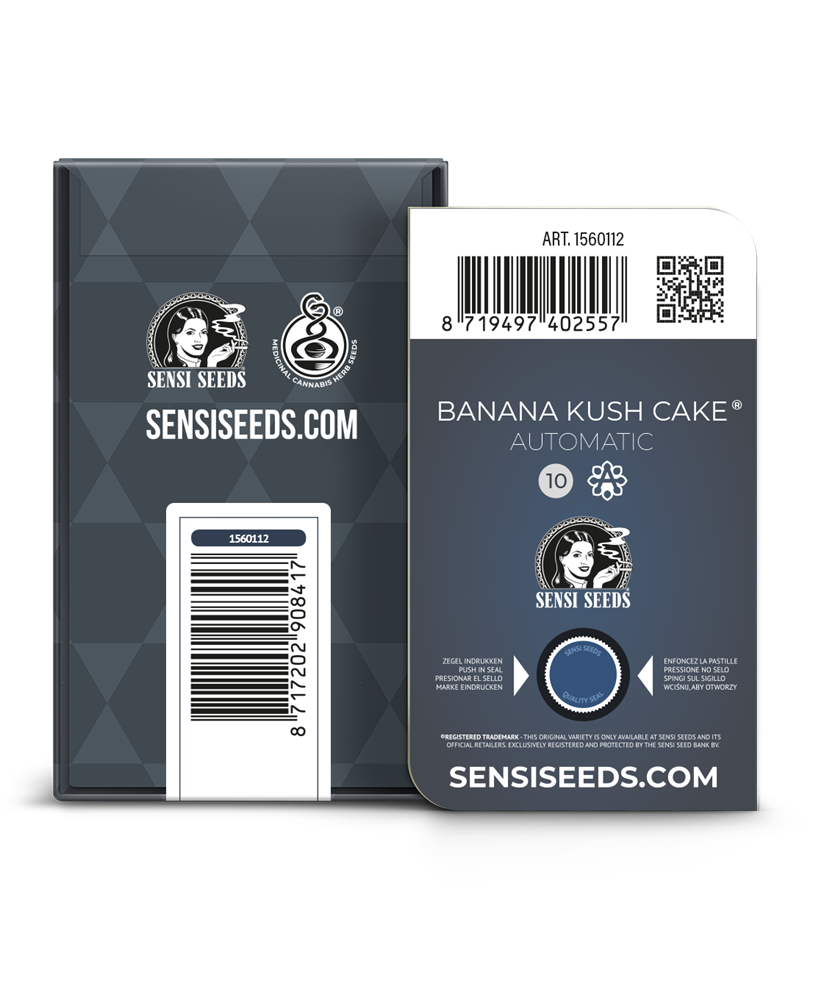 Banana Kush Cake Automatic is 75% indica and 25% sativa. Developed as part of Sensi Seeds’ 2021 Research project, this new strain’s genetics include Wedding Cheesecake, Banana Kush and Hindu Kush Auto. This combination produces some phenotype variation, something that will appeal to experimental growers. Yields are large for an autoflowering variety, and the plants grow well in cooler climates.

Banana Kush Cake Automatic is 75% indica and 25% sativa. The strain has impressive genetics: Wedding Cheesecake, Banana Kush, and Hindu Kush Auto. It’s one of Sensi Seeds’ newest varieties, developed as part of our 2021 Research project. This automatic strain has average flowering times and reaches medium heights. It was named for its distinctive skunky banana aroma. Users can expect bumper yields with Banana Kush Cake Auto, and a high that’s potent, relaxing and cerebral.

Banana Kush Cake Automatic cannabis seeds are 75% indica, 25% sativa. This new strain was created by Sensi Seeds as part of Research 2021, and combines two much-loved strains, Wedding Cheesecake and Banana Kush, with Hindu Kush Auto. This has resulted in a strain that has several phenotypes – something that’s sure to be appreciated by growers that enjoy variation.

This is the automatic version of the strain. That means that even inexperienced growers should have success with it, as there’s no need to calculate light exposure, or to remove any male plants. On average, growers can anticipate the flowering period to last seven to nine weeks, but this may vary, depending on the exact phenotype of the plants.

The plants are typically compact in size, which is useful for those with limited space, or those who want to cultivate without attracting attention. Their appearance can be variable, but generally, they have a sturdy central stem, with closely spaced nodes, and a conical shape that’s wider at the base than the top.

One thing that doesn’t tend to vary is the size of the yield. For an autoflowering variety, Banana Kush Cake is capable of producing impressive harvests; something that growers particularly value. The buds are dense, cone-shaped, and packed tightly together. Some ‘run’ to the upper stem and branches, and the clusters remain dense, not open. They’re also coated in plenty of sparkling, sticky resin, and the pistils sometimes turn pink and orange.

As with all robust automatic strains, Banana Kush Cake grows well in cooler climates. It can also be grown inside under artificial lights.

Banana Kush Cake Automatic is indica-dominant. This is revealed in the size and appearance of the plants, and in the resulting high. Users will notice the soothing, dreamy impact of the strain, combined with just a touch of energising ‘buzz’, which is down to the sativa genetics. Note – although this is an automatic variant, the high is still potent. As such, novice users should approach with a level of caution.

The scent of the plants is subtle and skunky with notes of sweet citrus and banana – in fact, it’s this smell that gives the strain its name. The aroma becomes stronger as the plants grow, but never becomes overpowering. This can be an advantage when cultivating them discreetly, especially for growers who have only a basic ventilation system.

The taste is much the same as the scent. The dominant flavours are hash, citrus, and banana, combined with brown sugar and a hint of spice.

Banana Kush Cake Automatic Seeds is added to your shoppingcart!

Banana Kush Cake Automatic Seeds is added to your wishlist!