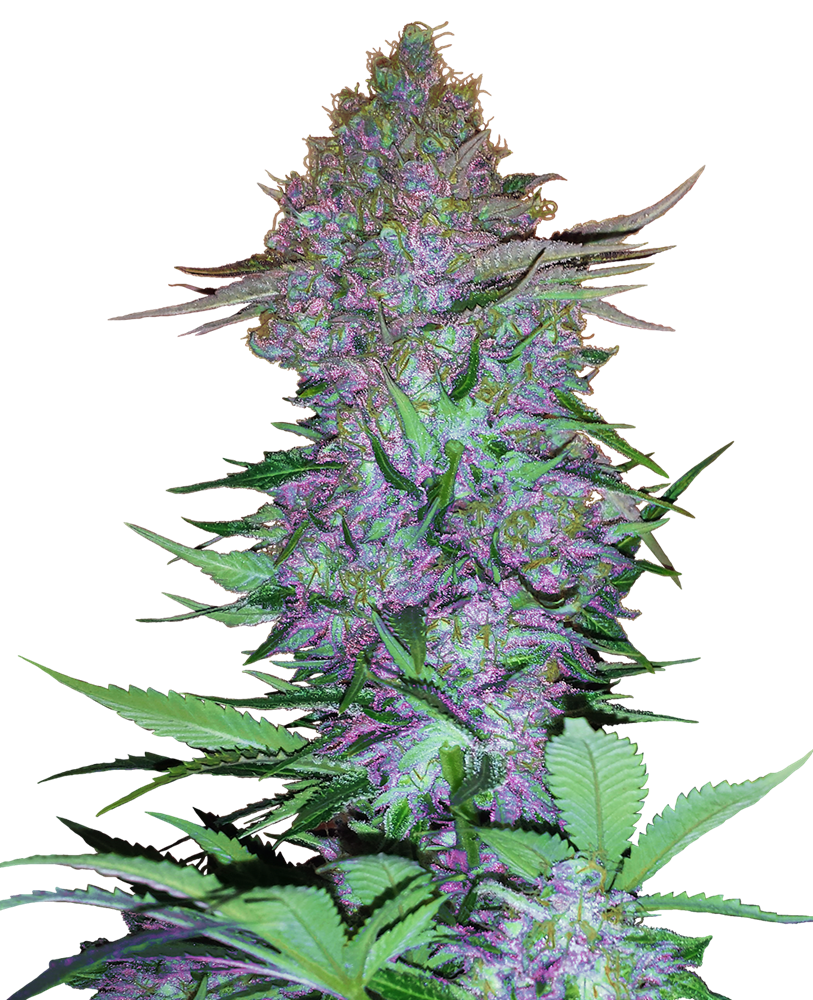 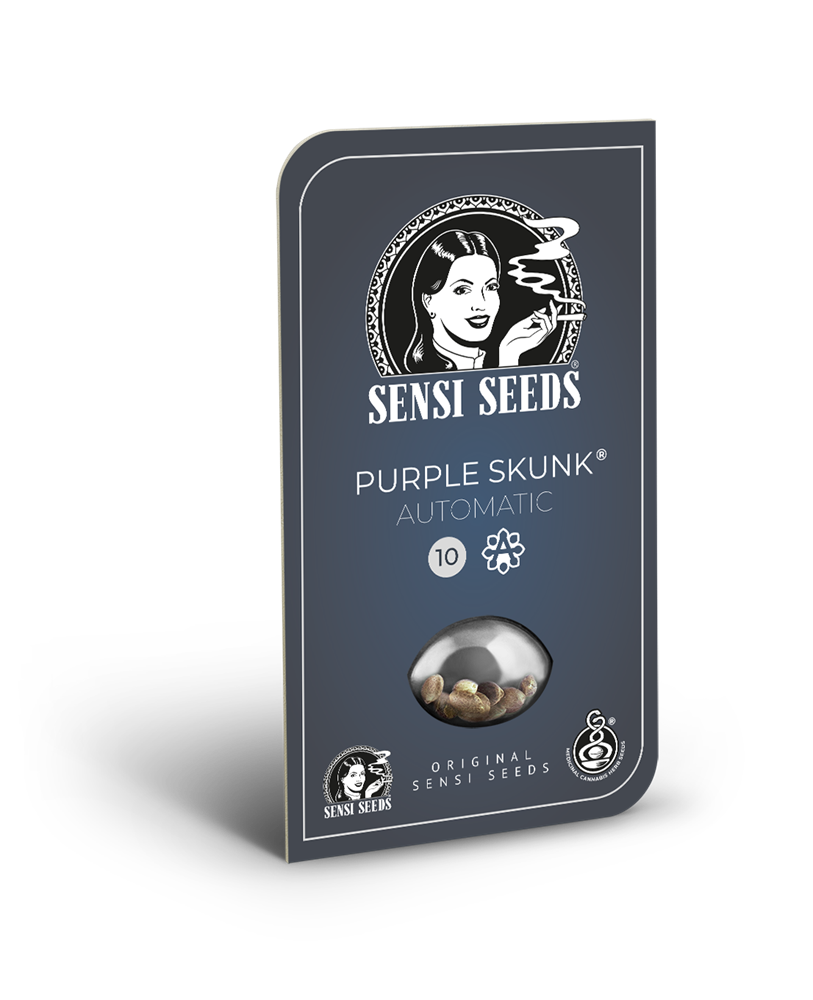 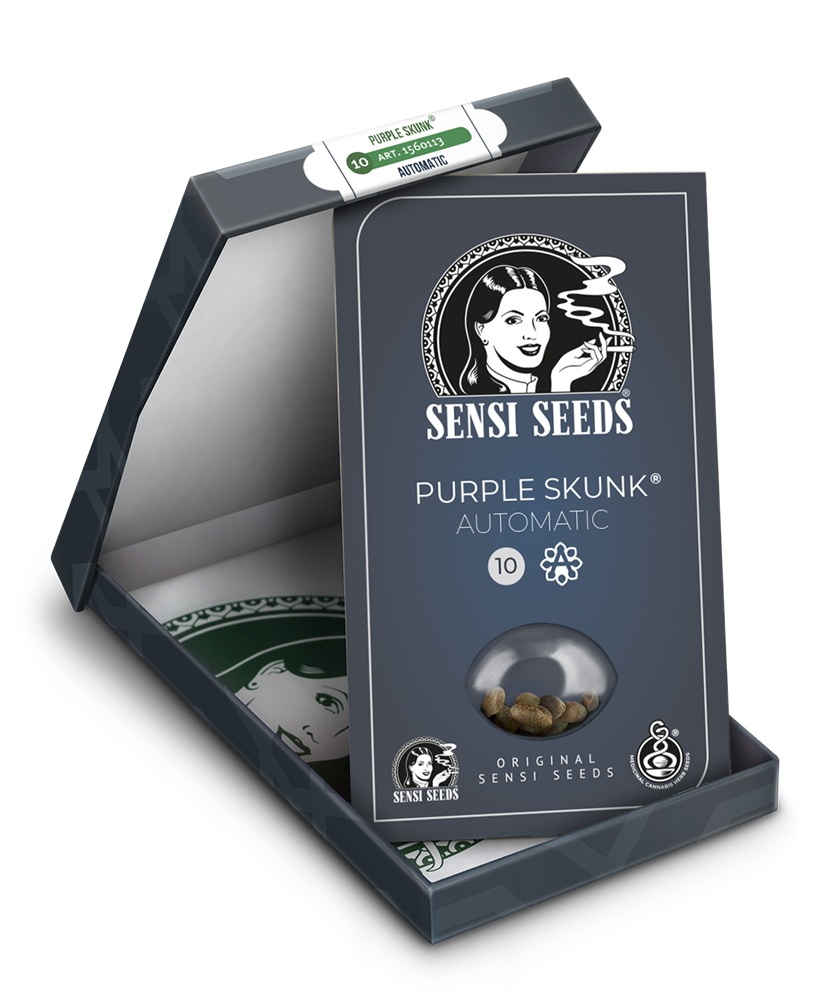 Purple Skunk Automatic is 75% indica and 25% sativa. It was developed as one of Sensi Seeds’ Research strains, and its parent-plants are Shiva Skunk, Skunk #1 and Hindu Kush Auto. Although the plants are compact, they produce enormous yields for an autoflowering variety. The scent is pungent, dank, and earthy, and the high is mellow and relaxing.

Purple Skunk Automatic is one of Sensi Seeds’ Research strains. It’s 75% indica and 25% sativa, and has impressive genetics: Hindu Kush Auto, Shiva Skunk, and Skunk #1. As the name suggests, the buds often turn a striking purple colour when grown in the right conditions. The plants remain compact as they grow, which makes them suitable for discreet cultivation. Users can expect bumper yields and an intensely relaxing effect.

Purple Skunk Automatic cannabis seeds are 75% indica, 25% sativa. They were developed as part of the Sensi Seeds Research 2021 project, from three notable parent plants – Hindu Kush Auto, Skunk #1 and Shiva Skunk. These genetics contribute to the strain’s skunky aroma and flavour, and its classic indica stone.

There is a level of phenotype variation with this strain, which makes it a good choice for adventurous growers, as some plants may look quite different to others. It’s also important to note that this is the autoflowering variant. As such, even novice growers will find it easy to cultivate, thanks to its predictable flowering and lack of male plants. It has an average flowering period, which means that it will take about eight weeks (indoors) for the plants to reach harvest time.

As with many indica-dominant strains, Purple Skunk Automatic is compact in size. This is an advantage for those that wish to grow it discreetly outside, or indoors where space is limited. The plants have thick central colas, and are typically conical or pyramidal in form, with a rounded tip. Though they’re small, they’re capable of producing super-sized yields, both inside and outdoors.

The buds are weighty and large, with their most notable feature being their purple hue. This colouring is especially prominent when the plants are grown in colder temperatures. In fact, Purple Skunk Automatic flourishes in cooler climates, but can also be grown indoors under lights.

Like many indica-dominant strains, Purple Skunk Automatic is classically indica in appearance and in the stone it produces. Many people notice its intensely relaxing effect, which leaves users pleasantly stoned without being locked to the couch.

The plants also have a typical indica scent, which is skunky, earthy and dank, with a touch of sweetness and exotic sandalwood. The aroma grows stronger as the plants reach harvest-time, which is something growers should be aware of.

As for the flavour, consumers will notice that a lot of the same tones are present: rich earthiness and skunky sweetness. Sometimes, it’s possible to detect some spicy notes too.

Purple Skunk Automatic Seeds is added to your shoppingcart!

Purple Skunk Automatic Seeds is added to your wishlist!