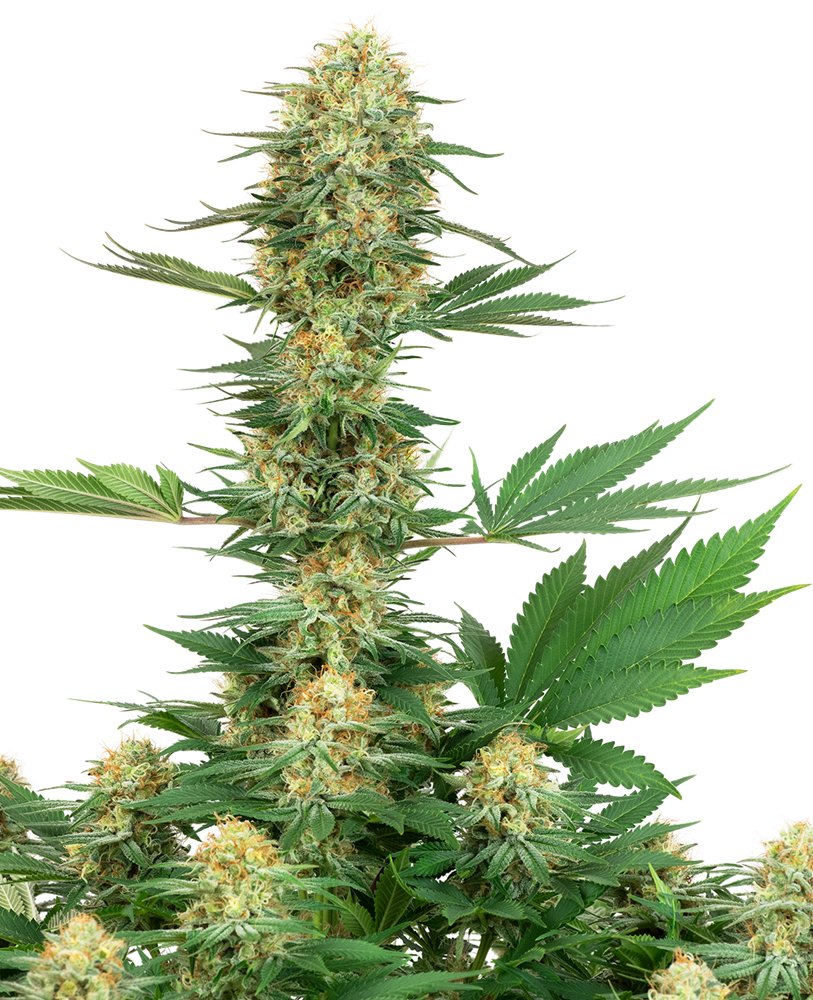 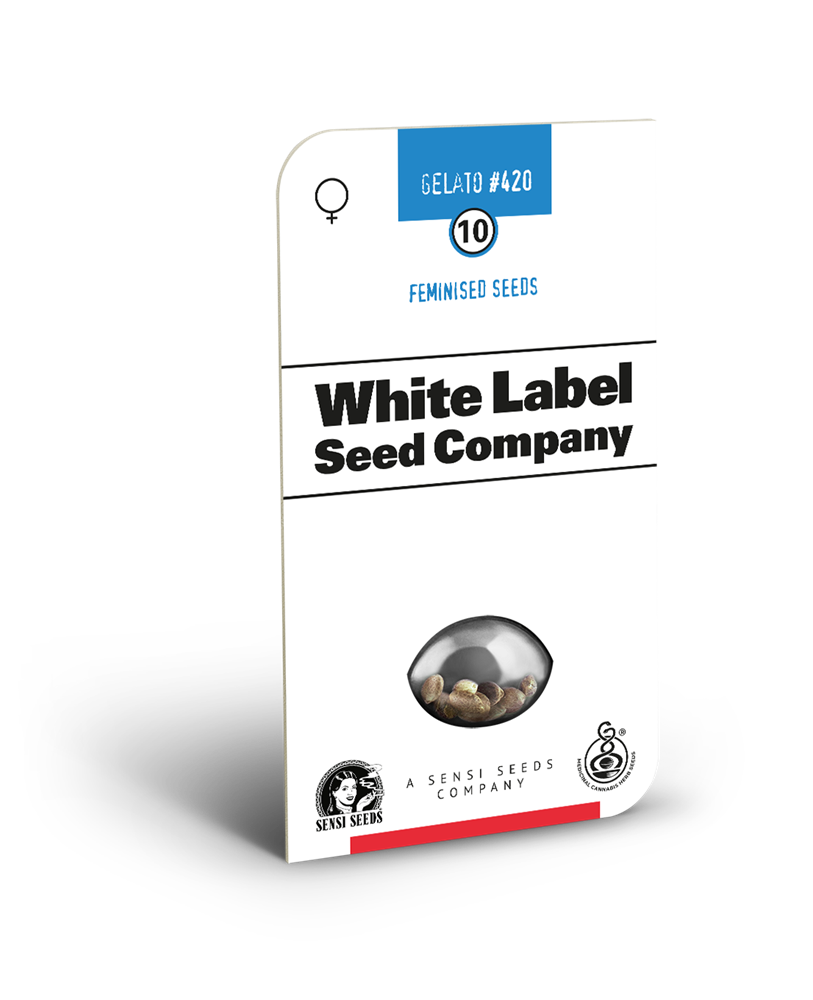 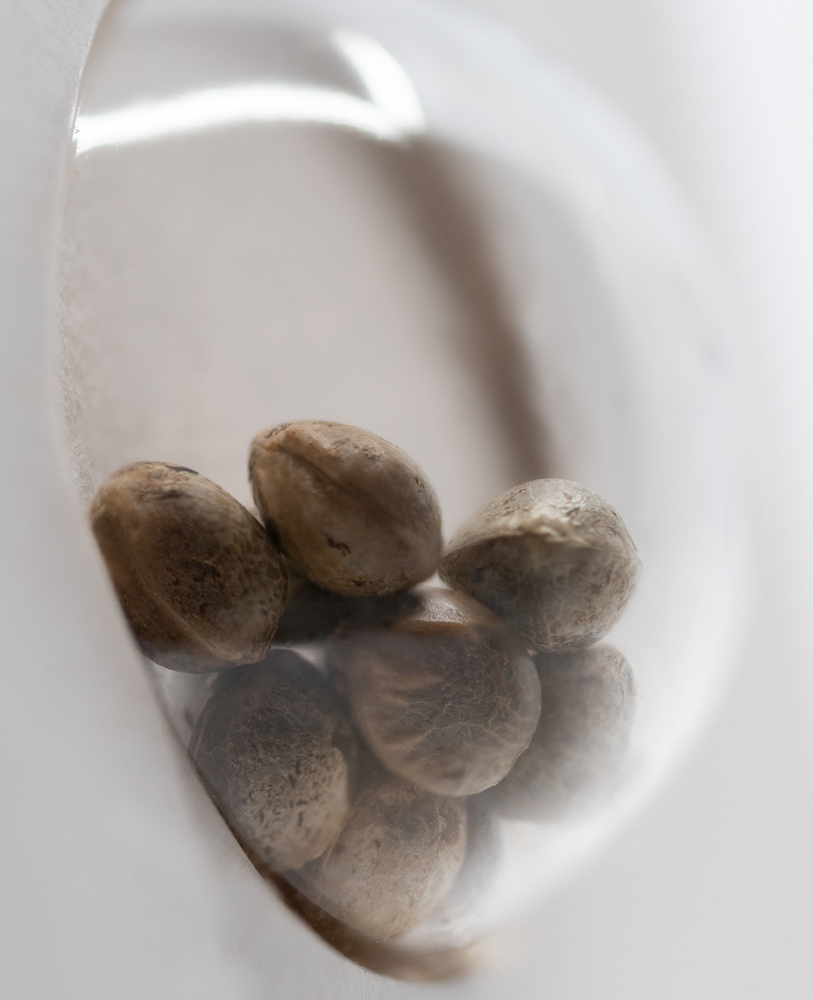 Gelato #420 Feminized is 60% indica, 40% sativa. As the latest refinement of the famous Gelato from California, it improves the yield of the flavourful indica-sativa hybrid. It also makes the ‘clone-only’ Gelato available as a stable seed strain.

White Label Gelato #420 Feminized was created by back-crossing Gelato 33 with our original Durban cultivar and the Hindu Kush strain, which forms the backbone of OG Kush. By returning the Gelato line to its Afghan and African cannabis roots, White Label Gelato #420 gains weight, flavour and even greater potency.

Gelato #420 Feminized cannabis seeds are 60% indica, 40% sativa. Strong indica stature and significant sativa height gain are hallmarks of this strain. Indoors, it can be given a relatively short vegetation period, as plants generally triple their vegetated height as they flower. Outdoors, in a warm and sunny climate, Gelato #420 feminized cannabis seeds can be started a little later than other strains. This controls its height.

When grown in a natural light cycle, certain cultivation techniques are useful for managing the strain’s impressive stature. These include training plants to grow parallel to the ground, trellising, and pruning them to encourage more bushy growth. As long as the local climate remains reasonably favourable through October, White Label Gelato #420 can produce an excellent outdoor harvest.

Indoors, the best way to maximise the yield of Gelato #420 feminized cannabis seeds is cloning. Alternatively, prune the main stem of the larger plants to increase budding sites.

Plants grown and flowered from seed tend to have strong lateral and upward branching, with very small internodal gaps. Naturally, clones share this trait, though their lateral branches tend to be less vigorous (due to the shorter vegetation time). The yield produced by Gelato #420’s branches means that lollipopping and SOG are best avoided. ScrOG (screen of green) can produce good results with well-spaced plants.

At harvest time, Gelato #420’s abundance of budding nodes results in plants with long, thick colas on their main stems. The branches are also full of solid oval buds, which tend to stay separate. The density of these flower clusters means that even smaller buds retain a pleasing weight after drying. Flowering time is eight to eleven weeks, with the most efficient ratio of time vs yield coming from phenotypes in the nine to ten-week range.

Effect, taste and smell of Gelato #420 Feminized by White Label

The growing odour is quite restrained, with the full, complex bouquet of this strain reaching its peak after drying. The most common elements are citrus, mint, and vanilla from the Kush hybrid forebears, plus aniseed, hashish, and sandalwood from the Durban and Hindu Kush cultivars. Uniting all these high notes is a base of smooth, creamy chamomile, most commonly associated with Haze strains. Gelato #420’s aroma profile may bring to mind all the flavours of an ice cream parlour.

Highly potent indica and sativa parents make White Label Gelato #420 a strain that should never be taken lightly. A powerful euphoric body stone is lifted by an intense, creative sativa high. Novices should handle with care, and even experienced connoisseurs should test the waters before diving in.

Gelato #420 Feminized Seeds by White Label is added to your shoppingcart!

Gelato #420 Feminized Seeds by White Label is added to your wishlist!