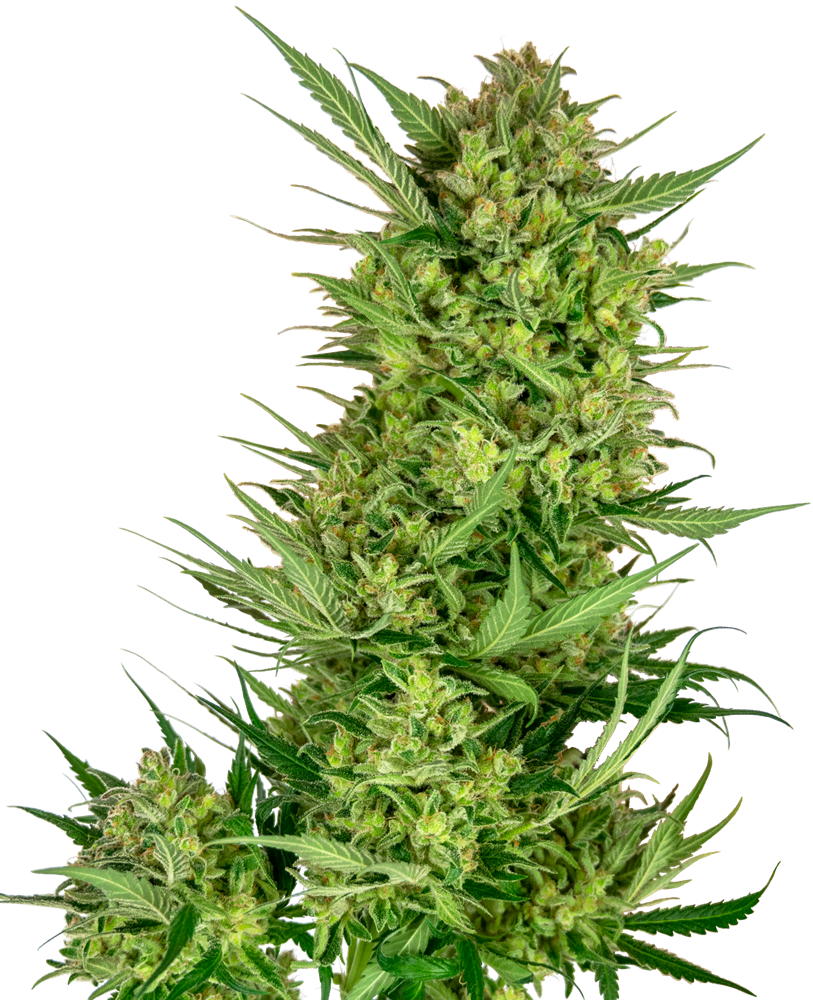 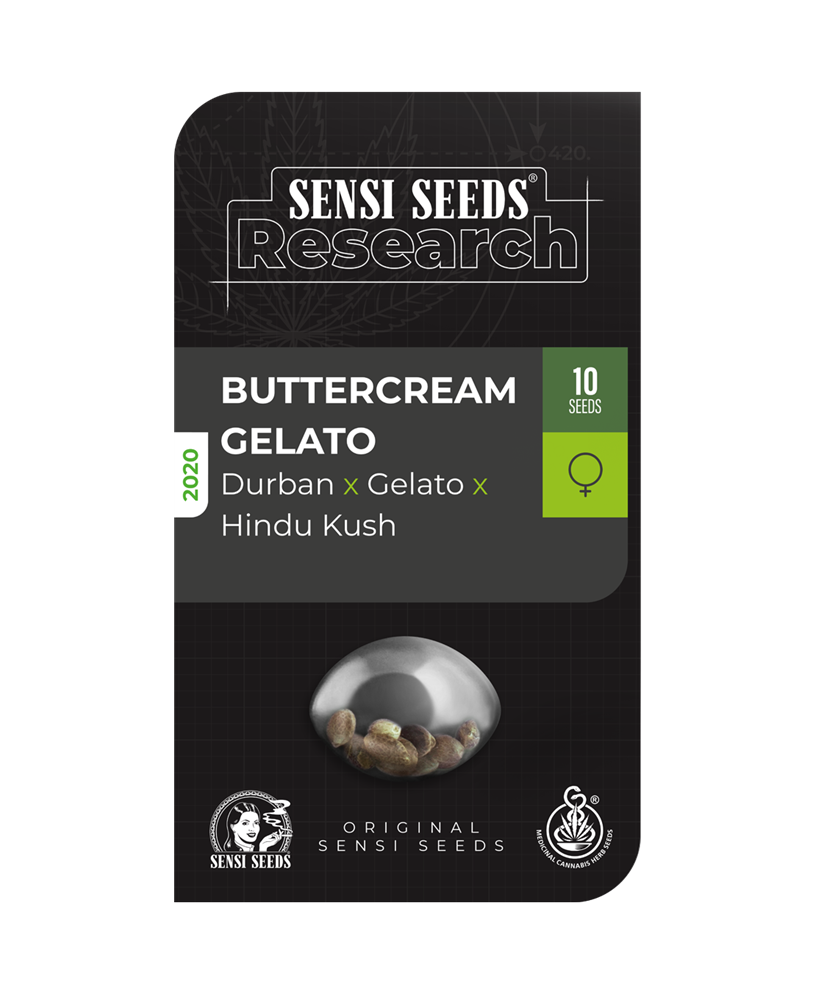 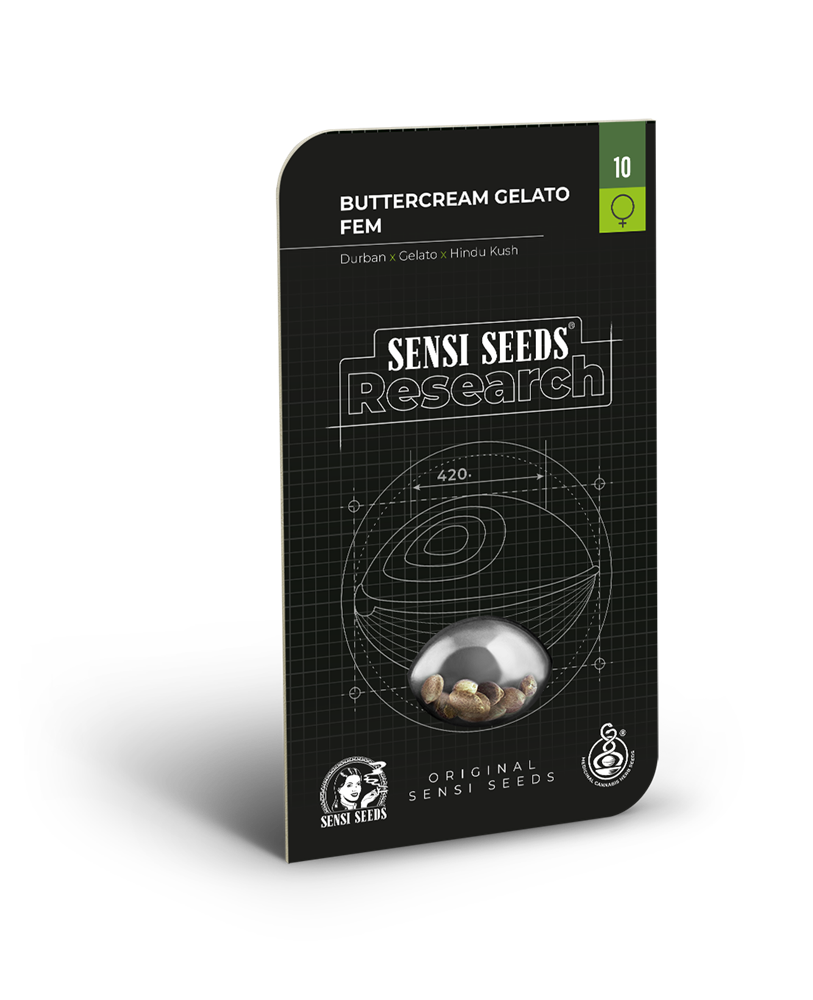 Buttercream Gelato is 60% indica and 40% sativa. Its genetics include Hindu Kush, a popular compact indica variety; Gelato, which is famed for its powerful high; and world-renowned sativa Durban. The plants are usually tall when fully grown, and have a flowering time of 55-75 days. They produce a woody, citrussy scent, with a hint of hash. The high is an intense body stone with a creative, euphoric lift.

This strain is 60% indica and 40% sativa. Its impressive parentage includes Durban, a world-famous sativa; Gelato, which is known for its intense high; and Hindu Kush, a celebrated producer of impressive yields.

Gelato is a very special cultivar, and provides an exciting group of genetics for us to work with. Its parents are two top quality strains from the Girl Scout Cookies family tree. Gelato originated in California’s Bay Area, and with its unmistakable dessert aroma has become one of today’s most famous varieties. We’re delighted to bring you our Sensi Seeds version of Gelato, which has all the Californian personality of the original, reinforced with Sensi Seeds genetics.

The plants take a little longer than average to complete their flowering period. During this time, they grow to sizeable heights. They produce a citrussy, sandalwood aroma, with notes of hash. The high is the real draw – users can anticipate a rush of euphoria and creativity combined with a potent body-stone.

These seeds are feminized. That means that all the plants they produce will flower as though they are female. Novice growers find that this is an advantage, as they don’t need to identify and remove male plants during cultivation.

The plants have a relatively lengthy flowering time of around 55 to 75 days. However, most growers agree that the resulting buds are well worth the wait. Although this is an indica-dominant strain, growers can expect the plants to grow to fairly large heights, especially when cultivated outside.

Despite this height, the indica influence is evident in the appearance of the plants. They feature strong lateral branching. During the flowering stages, the branches become laden with weighty buds. The long, thick colas form on the central stem and branches, and have lots of sticky resin.

When grown outside in the right conditions, the plants will produce good-sized yields. They’re also suitable for indoor cultivation. Outdoors, the best climate is Mediterranean: warm, sunny and with a long, reliable summer.

Experienced growers may want to experiment with the SCROG (Screen of Green) cultivation technique, or supercropping. Both reportedly produce good results.

The influence of this strain’s Gelato parentage is evident in the aroma, taste and high. Gelato is descended from the Cookie family of cannabis cultivars, which is known for sweet, fruity, dessert flavours. Combining this with the earthy notes of Hindu Kush and the subtle spice of Durban has created a delicious blend.

Upon consumption, users will notice the swift-acting body-stone, which provides a potent sense of relaxation. While this is typical of indica- dominant varieties, the sativa is apparent in the accompanying uplifting high, which often leaves users feeling chatty and creative.

During the flowering period, the plants produce a subtle citrus aroma, with notes of sandalwood, mint and vanilla. There’s also a distinct hint of hash, which strengthens as the buds approach harvest-time. The subtlety of the smell makes this a good strain for discreet cultivation.

To taste, users can expect a full, rich flavour, with a creamy, fruity aftertaste.

Buttercream Gelato Feminized Seeds is added to your shoppingcart!

Buttercream Gelato Feminized Seeds is added to your wishlist!