Space has fascinated humanity since we could first look upwards. It’s only natural that we would want to get up there and see what was going on. Add cannabis to this fascination, and the questions that arise are potentially endless. Let’s explore space, cannabis, and space cannabis!

The countdown to the launch of this article began in 2017, when we received an excited email from a company called Herban Planet. It informed us they had made history by launching cannabis into space. One of their subsidiaries, together with the brilliant folks from Sent Into Space, had successfully sent nearly half a kilo of cannabis buds 35 km above the planet’s surface.

Why would they do this? Well, the name of the subsidiary in question is ‘Space Weed Bro’, which more or less answers the question. Their “space weed” is exclusively for sale at an Arizona, US dispensary. The Space Weed Bro website says all of it has made “a trip to zero gravity space, guaranteeing an ultra-premium product that has reached for the stars”.

Does this mean that the “ultra-premium” nature of the buds is linked to the fact that they’ve been into zero-gravity space? Or is it their “reaching for the stars” that is guaranteed by their astronomical journey? Presumably, just like with human astronauts, the best specimens would be chosen.

But would sending cannabis into space have any effect on it? Does 35km even count as “in space”? What is “zero gravity space”? What else have Sent Into Space sent into space? And has this space weed boldly gone where no bud had gone before, or has other cannabis been in space? The mission to answer these questions had begun!

When it comes to cannabis, how high is space?

According to the Fédération Aéronautique Internationale (FAI), space begins 100 km from Earth. The federation was set up in 1905 to keep track of “the sport of flying”. It has since expanded to govern records for all kinds of sky-related activities, including spaceflight.

JAXA, the Japan Aerospace Exploration Agency, currently holds the altitude record for a balloon without a crew, which is 53 km. Even this is only halfway to the Kármán Line, as the 100 km point is known.

By FAI standards, at 322 km the International Space Station is definitely considered to be in space. If the famous photo of Commander Chris Hadfield holding a large bag of “space weed” was real rather than photoshopped, this would definitely be the furthest that cannabis has ever been into space. Sadly, it’s a hoax.

The cheerful astronaut is holding a bag of Easter eggs that he’s about to hide on board the space station. If there has been cannabis on the ISS, everyone is keeping very quiet about it (in space, no-one can hear you cough).

However, 35 km is considered ‘near space’ (if you ever wondered what the opposite of ‘outer space’ is, now you know). It’s in the upper stratosphere, which is pretty impressive. Especially considering that the balloon used by Jaxa was 60 m across, and the Space Weed Bro / Sent Into Space one was around 10 m across at the point it burst.

This explosion, which is obviously what causes the payload – in this case, our favourite herb – to return to earth, is caused by the air at the upper reaches of the stratosphere being 1000 times thinner than it is at sea level. The gas inside the balloon expands rapidly until the balloon succumbs to it. At this point, the cannabis enters free-fall. 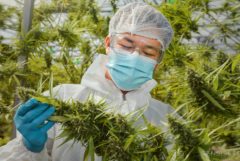 Attention, would-be astronaut dealers! In free-fall, cannabis – just like everything else – weighs nothing. As soon as the balloon bursts, the only force acting on its payload is gravity. This is known as free-fall.

Free-fall causes the phenomenon of weightlessness in the ISS; in the “Vomit Comet”; on rollercoasters; and even – for a fraction of a second – if you jump off a table. So you can experience it right here on Earth. Interestingly, there is no such thing as “zero-gravity space”; as you move away from Earth, the gravity continues to decrease, but it never gets to zero.

This is actually good news for our space weed, bro. If it was genuinely in “zero-gravity space”, once the balloon popped, it would just float around randomly instead of returning to Earth. Plus, the gravitational pull of other objects would begin to take effect.

So what does happen to cannabis in space?

In addition to Space Weed Bro, the team from Sent Into Space sent a joint into space for Viceland TV to celebrate ‘Weed Week’ in April 2017. It reached 32.4 km! Sent Into Space really know what they are doing; this interview with co-founder Dr Chris Rose, Ph.D. makes that very clear. Their area of expertise is space, rather than cannabis, but Dr Rose’s excitement at finding out what happens to cannabis that has been into near space is palpable.

Although Space Weed Bro is, by far, the most professional launch of cannabis into space that has come to light, it’s actually not the first. That credit goes to – as far as we can discover – these people, who seem to be representing SeedHub, a directory of seed companies in the US.

The link given in the YouTube description leads to a completely blank page. However, there is no doubt that they did manage to send not just cannabis buds in the form of a joint, but also seeds and a living plant, into space!

According to their video, they managed to get almost 29 km high before their balloon exploded. If 32 km is near space, then 29 km is, at the very least, near near space. This charmingly amateur launch took place on June 1st, 2013.

Four years later came the Herban Planet mission, but the cannabis space race wasn’t over yet. In 2019 a company called Space Tango sent hemp seeds to the ISS to research the effect of microgravity on them. This exciting project is the result of a partnership between a CBD manufacturer, a hemp growing and lifestyle company, and microgravity experts Space Tango themselves. The results have not yet been made public, but we are keen to see them.

Coffee and cannabis on the ISS?

Another fascinating experiment that we’re still awaiting the results of is from Front Range Biosciences. In 2019 they sent plant cultures from hemp (and coffee) to the ISS to see if they would mutate. Genuine ‘Space Weed, Bro’! (It is not known whether Commander Hadfield hid them like his Easter eggs.)

In fact, the intention is to help design crops that are more resilient to the climate crisis, or perhaps unlock the potential of even more of the cannabinoids present in the plant. Front Range Biosciences has already helped to develop a strain of coffee that can grow in California, a very different climate to that of the equatorial regions where coffee originated.

Do you think sending cannabis into space to see if it mutates is the way forward for humankind? Or should we be keeping its roots in the ground? Let us know in the comments below!