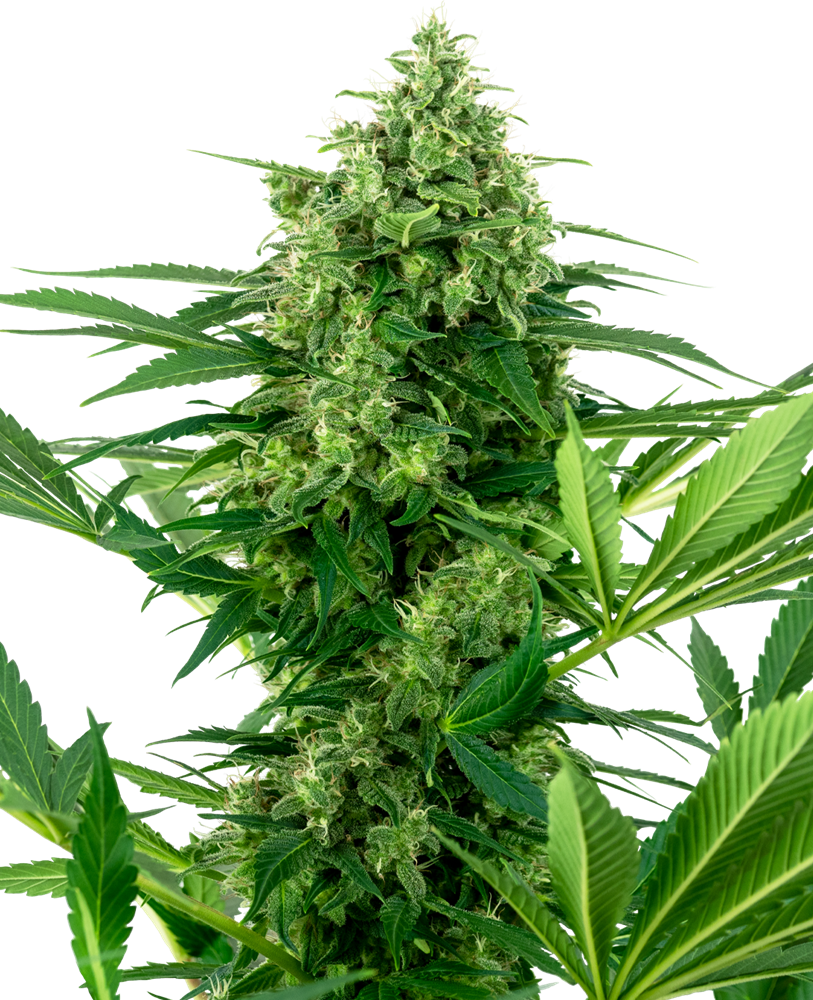 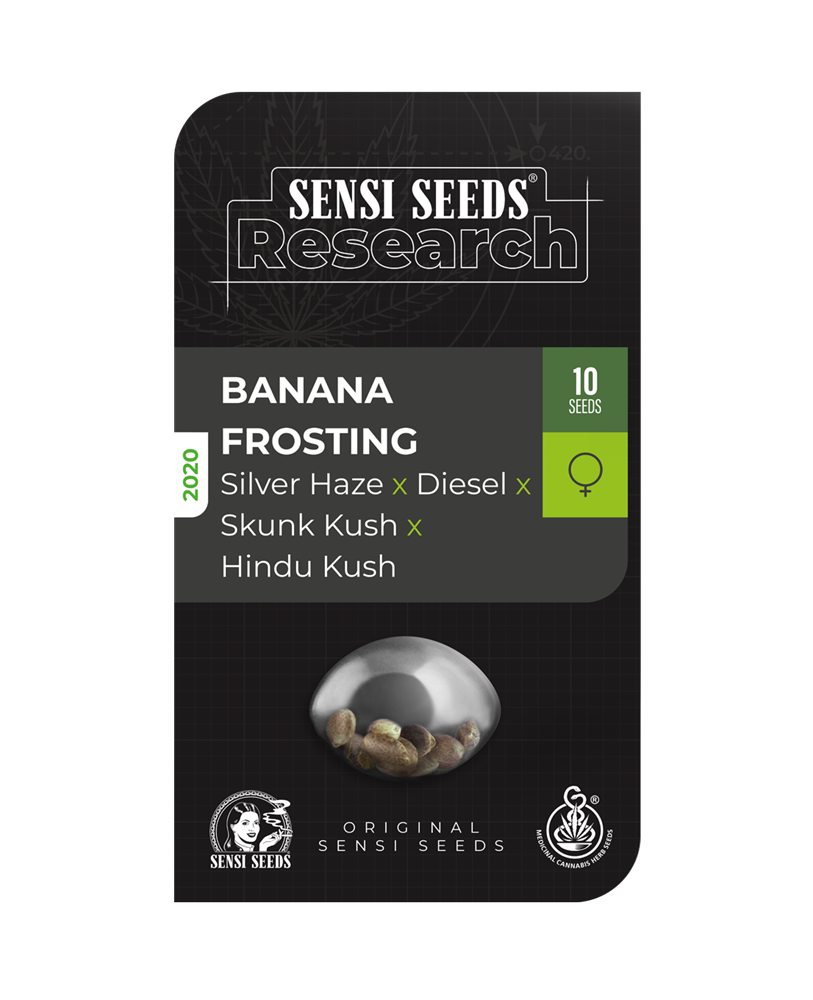 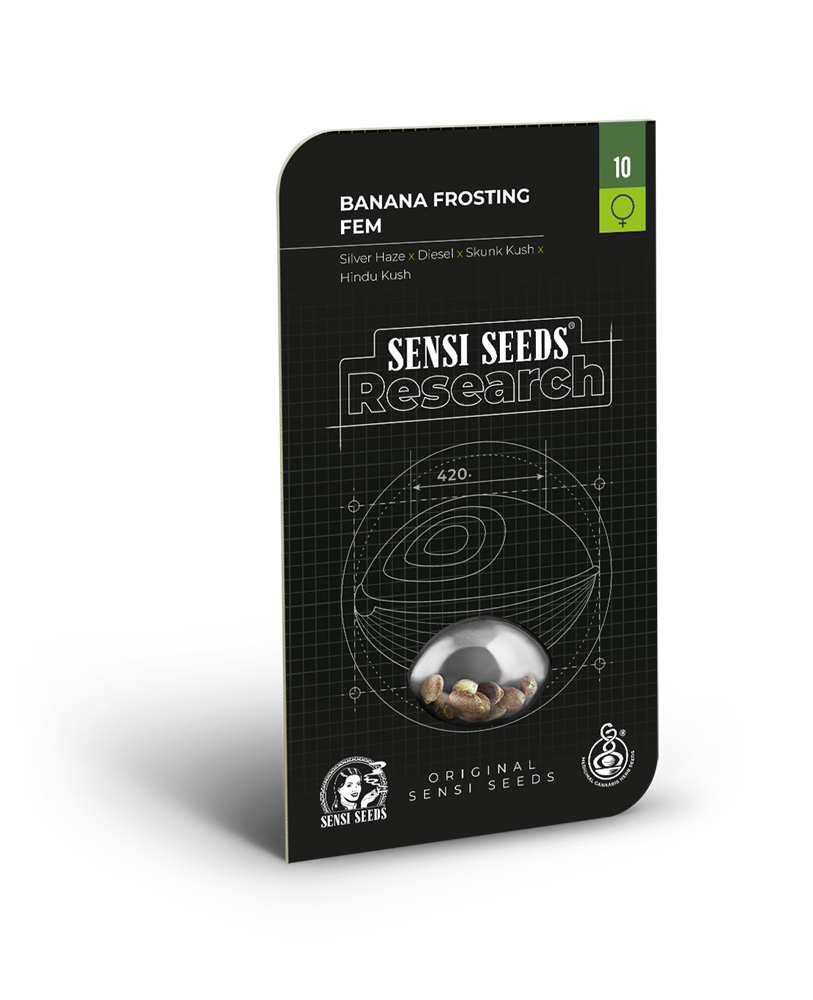 Our Banana Frosting Feminized is 70% indica and 30% sativa. It offers a high that’s potent, relaxing and cheerful. The plants have a relatively short flowering time and grow to moderate heights. They also produce large yields, have a fruity scent, and thrive in sunny, warm climates.

This strain boasts an impressive parentage, with a gene pool that includes Skunk Kush, Hindu Kush, Diesel, and Silver Haze. It’s a 70% indica, 30% sativa strain, which is evident in the plants’ relatively speedy flowering period, and yet citrussy aroma and taste. Thanks to the qualities of its parent plants, growers can expect bountiful yields, with plenty of sticky, resinous buds. The high is naturally also worthy of mention – intense, uplifting and deeply relaxing. It’s very much an American-style cannabis strain.

This hybrid’s impressive genetic pool includes parent plants like Silver Haze, Skunk Kush and Hindu Kush. The sativa influence is largely thanks to Silver Haze, and results in a noticeable sense of euphoria when consumed. However, the indica influence of the Kush parentage is evident in the plentiful buds and large yields, and Diesel can be detected in the aroma and cerebral high.

These seeds are feminized, which means that it’s highly unlikely that the pack will contain any male plants. This is an advantage for novice growers, as it means there probably won’t be any requirement to identify and remove certain plants during cultivation.

Another benefit of this strain is its relatively short flowering time of just 50 to 65 days, which is useful for those who want to harvest the plants fairly quickly. Despite the fact that it’s mostly sativa, the strain doesn’t grow to excessive heights. In fact, it’s a fairly compact variety and can be grown discreetly, both indoors and outside.

In appearance, the strain is sturdy and bushy, which is reminiscent of its indica background. The main stem is thick and strong, and has branches with short internodes. Growers can expect to see plenty of buds forming during the flowering stages, which usually result in a bumper harvest. The colas are large and dense, and are pyramidal in shape.

One of this strain’s biggest draws is its extensive yields. When cultivated outdoors in the right conditions, growers are likely to generate a sizeable quantity. The plants also perform well indoors. If growing the plants outside, the climate should be warm and sunny, with a long, reliable summer. Mediterranean countries are perfect.

The plants respond well to most cultivation techniques, such as SCROG (Screen of Green), SOG (Sea of Green), supercropping, and lollipopping.

The strain is 70% indica and 30% sativa, and most users note that the sativa is predominant in the scent, taste, and to a degree, in the high.

Unsurprisingly (given its parentage), the strain produces an effect that’s intense and fast-acting. Users can anticipate physical relaxation without a couch-lock, and a sense of warmth and happiness. The sativa genetics add a feeling of euphoria too, and just the right level of uplift.

When the plants are growing, they have a sweet, ripe banana and citrus aroma, which strengthens as the flowering period progresses. Other fruity scents may also be detected, particularly near the harvesting stage. When tasted, users note that citrus is the dominant flavour with a novel banana finish, but there’s also a hint of spice and brown sugar too. This fruity sweetness reveals Banana Frosting’s Californian side.

Banana Frosting Feminized Seeds is added to your shoppingcart!

Banana Frosting Feminized Seeds is added to your wishlist!