Effects of Cannabis on the Male and Female Reproductive System, and Fertility

Use of cannabis may affect human fertility, depending on gender, general health, socioeconomic status and several other factors. Here, we look at existing research on cannabis and human fertility, in order to provide readers with an accurate, up-to-date summary of the current state of scientific knowledge.

To understand how cannabis may affect fertility, we must understand the effect it has specifically on males and on females. We’ll start by looking at the effects on the male reproductive system, and then focus on the more complicated effects on female fertility.

Cannabis use and male fertility

Some studies on the effect of cannabis use on male fertility have indicated that regular use may reduce spermatogenesis (the production of sperm in the testes) and testosterone levels.

In 2012, the American Society of Andrology published a review of research on the effects of illicit drug use on male fertility. The researchers found that in the majority of studies, it was consistently concluded that cannabis use had a negative impact on male reproductive physiology. 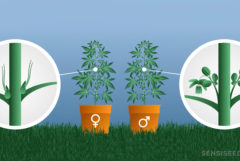 The endocannabinoid system and male fertility

Clearly, the endocannabinoid system has a role to play in the regulation of processes critical to male reproductive health, such as sperm count, testosterone levels, and levels of other key hormones such as LH.

For healthy adult males, it seems that use of THC does indeed cause some negative effects on fertility, which tend to increase with higher doses. However, THC’s endogenous analogue anandamide appears to be critical to the functioning of the male reproductive system.

It was first observed that type-I cannabinoid receptors were present in human testes in a 1993 study. In 2002, a later study observed anandamide in human seminal fluid, and CB1-receptors in human spermatozoa.

The 2002 study found that sperm cells would bind to the agonist CP-55,940, demonstrating the presence of CB1-receptors. The study also concluded that the presence of THC and a synthetic anandamide analogue, AM-356, both reduced sperm motility in vitro. Interestingly, it was found that AM-356 exerted a biphasic dose-dependent effect on sperm motility, causing inhibition at high doses but hyperactivity at low doses.

Anandamide and the “capacitation” of human sperm cells

In a 1994 study, it was found that mammalian sperm, including that of humans, is actually incapable of fertilizing oocytes (eggs) immediately after leaving the testes. It requires a period of exposure to certain crucial hormones, enzymes and proteins on its journey through the vas deferens and ejaculatory ducts of the male reproductive system (as well as the reproductive fluids of the female vagina and oviducts) before becoming “capacitated” and able to fertilize an egg.

The 2002 study provides strong evidence that the presence of the anandamide in the seminal fluid, and its ability to bind to the CB1-receptors of the spermatozoa, are key to the “capacitation” of sperm cells on their way to the ejaculatory ducts. It has to be present in the appropriate concentrations, though. If the level of anandamide is too high, it can instead have a dramatic inhibitory effect on the sperm cells’ ability to fertilize oocytes. 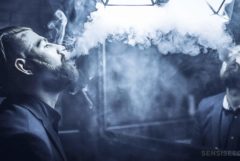 Why is anandamide beneficial, while THC may not be?

Although THC and anandamide are both agonists of the CB1-receptors, they greatly differ in structure and therefore have different effects on certain metabolic processes. Anandamide has a much shorter half-life than THC (just a few minutes for anandamide compared to as long as 24 hours for THC). So while anandamide will degrade shortly after it contacts a receptor, THC can remain in nearby adipose tissue for much longer periods, and can continue to stimulate the receptors, ultimately causing overstimulation and potential negative effects.

As is so often the case with cannabinoid science, dosage is everything—and it may prove to be the case that very small doses of THC could benefit males who have reproductive issues that can be tied to low levels of anandamide.

Cannabis use and female fertility

While the effect of cannabis use on male fertility appears to be quite straightforward—with male chronic cannabis users being likely to experience some degree of impairment to reproductive physiology—the effect on the human female reproductive system is less clear-cut.

Female reproductive health is vastly complex in itself, as it not only comprises the ability to become pregnant but also the ability to carry healthy offspring to term and successfully give birth.

Past research has indicated that cannabis use may disrupt the menstrual cycle, suppress oogenesis (production of eggs in the ovaries) and impair embryo implantation and development. Chronic use of cannabis has also been repeatedly associated with lower birth weight (as much as a 50% increased risk), decreased birth weight and  early (spontaneous) termination of pregnancy.

However, most of these findings are far from conclusive. Either the study included very few participants or confounding factors such as tobacco use aren’t taken into consideration. In fact, more recent research, like this review on infants who were exposed to marijuana in-utero, concludes there aren’t any adverse risks.

For example, a 1985 paper on foetal abnormality (Qazi et al.) after prenatal exposure to cannabis discussed five infants whose mothers acknowledged use of cannabis prior to and during pregnancy and who were born with various symptoms of growth retardation, neurological dysfunction and deformity. While it may provide helpful insight, such a small sample size is far from being enough to draw concrete conclusions, and correlation does not imply causation.

Other studies seen as providing evidence that cannabis use can cause foetal abnormalities are animal studies (Geber & Schramm 1969, Phillipset al, 1971) in which rabbits, hamsters, rats and mice were injected with vast doses of crude cannabis extract (as much as 666mg/kg in one instance!). Such massive doses of cannabis would be practically impossible for a human to consume through conventional means, and are essentially useless as a point of comparison.

In fact, many early studies that indicated a correlation between use of cannabis (or other controlled substances such as cocaine) have been later contradicted by findings suggesting that socioeconomic status and level of poverty are far more causative of low birth weight and poor developmental outcome than use of the substances themselves. This doesn’t imply that use of cannabis or other substances during pregnancy has no adverse effect, but does give weight to the idea that the risks have been overestimated and overemphasized due to politics and anti-drug bias.

The endocannabinoid system and female fertility

Just as in males, it’s clear that the endocannabinoid system has an important role to play in female fertility.

As well as assisting in capacitating the sperm cell and facilitating its journey to the fallopian tubes where fertilization takes place, anandamide and the CB1-receptors have a crucial role to play in ovulation and the implantation of the fertilized gamete into the endometrium (the lining of the womb).

The concentration of anandamide in the oocytes has been found to strongly correlate with the maturation and quality of the oocytes, which in turn determine the success of ovulation. It’s not clear exactly by what mechanism anandamide works to control oocyte maturation; the fact that high levels of anandamide are necessary at this time would appear to contradict the findings that use of THC can disrupt oogenesis and ovulation.

The process may be complicated by the role of the endocannabinoid system in digestive health. Cannabinoids are known to affect key physiological processes, such as appetite and glucose metabolism, thereby potentially working to reduce the chances of obesity.

Obesity is strongly linked to reproductive health. So, the positive effect THC may have on nutritional health could outweigh the negative effect it might have on ovulation itself, producing an overall positive effect on fertility in the end.

The role of cannabis & endocannabinoids in fertility & birth control

Although it does appear that heavy use of cannabis can have a negative effect on human fertility and reproduction, the extensive research that has been done on the subject has paved the way for a far deeper understanding of human reproductive physiology. It has opened the door to the possibility of targeted, endocannabinoid-based treatments for the 10-15% of couples worldwide that suffer from poor reproductive health.

Furthermore, while use of cannabis and exogenous cannabis may in many cases be detrimental to human reproductive fitness on an individual level, they may on the other hand prove useful as a non-invasive means of controlling fertility in populations with fertility rates well above the rate of replacement (the rate at which new babies must be born to replace individuals that die, in order to maintain the overall size of a population).

4 thoughts on “Effects of Cannabis on the Male and Female Reproductive System, and Fertility”