How Does Cannabis Affect the Digestive System?

The endocannabinoid system is fundamentally important to the regulation of digestive processes including appetite, salivation, hunger, and satiety. Cannabinoid receptors are widely distributed throughout the digestive system, as well as in the brain regions considered to be crucial to the gut-brain axis.

For some people, introducing extra cannabinoids to the finely-tuned endocannabinoid system of the gastrointestinal (GI) tract (the scientific term for the digestive system) can have positive effects. This is particularly true in individuals suffering from certain gastrointestinal disorders, including Crohn’s, inflammatory bowel disease (IBD), and irritable bowel syndrome (IBS).

The endocannabinoid system is complex and finely-tuned

In people who lack appetite, cannabis can be all that is needed to induce ravenous hunger. This can be highly beneficial for people suffering from certain illnesses that affect the appetite, from cancer to eating disorders themselves, as well as otherwise-healthy individuals whose appetite loss is due to stress or other factors.

On the other hand, in some individuals, the effect of introducing extra cannabinoids to the GI tract is disruptive and can cause a range of unusual and unexpected symptoms. In rare cases, cannabis can cause an acute vomiting syndrome known as cannabinoid hyperemesis syndrome, as well as potentially causing acute pancreatitis.

Positive effects of cannabis use on the GI tract

Multiple studies have demonstrated that cannabis can be helpful in the management of, IBD, IBS, fibromyalgia, Crohn’s, and cancer-related anorexia and cachexia (appetite loss and muscle wasting). The first three conditions are even speculated to be a result of clinical endocannabinoid deficiency (CECD), a condition in which the individual does not produce enough cannabinoids or cannabinoid receptors. These diseases appear to be promoted by spinal, peripheral and gastrointestional mechanisms, and the research suggests that cannabinoids can block these mechanisms.

In general, cannabinoids may decrease inflammation in inflammatory bowel disease. They are also known to reduce intestinal motility (basically, to reduce the speed at which matter passes through the intestine) and fluid secretions caused by inflammation, which helps to soothe nausea and prevent vomiting and diarrhoea.

How does cannabis stimulate the appetite?

Normally, hunger pangs are generated when the stomach gets empty. A hormone called ghrelin is released, which stimulates the vagus nerves of the GI tract and travel up to the brain along the gut-brain axis to reach the hypothalamus, where the hunger pangs actually originate.

In animal studies, synthetic THC activates the ghrelin receptors, sending signals along the gut-brain axis to the brain regions responsible for issuing sensations of hunger (particularly the hypothalamus) and ultimately causing hunger pangs even if the stomach is not empty.

Negative effects of cannabis use in the GI tract

At the opposite end of the spectrum, cannabis use can sometimes cause unpleasant digestive problems. In extremely rare cases, it is thought to cause certain serious and debilitating conditions. Generally, this phenomenon appears to affect chronic users that have used cannabis heavily for several years.

Cannabinoid hyperemesis syndrome causes cyclic vomiting, and a compulsive need to bathe to try to relieve the sensations of nausea and needing to vomit. It typically occurs in those that have used cannabis heavily for numerous years.

The few patients reported to have been affected by this condition sought medical treatment for acute vomiting and nausea after a period of heavy and protracted cannabis use, leading the authors of the case studies to conclude that cannabis was the cause of the problem.

Although controversial and little-studied, this condition now numbers over two dozen case reports, all of which are remarkably consistent, and all of which strongly implicate cannabis.

Most case reports have made no effort to explain the mechanism underlying this apparently-paradoxical side-effect of heavy and prolonged cannabis use. But at least one study hypothesized that the syndrome may occur due to the effect of THC on gastric motility, which is thought to potentially lead to delayed gastric emptying. 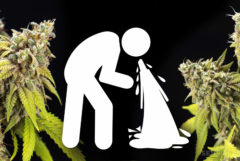 As well as cannabinoid hyperemesis syndrome, cannabis has now been linked to a handful of cases of acute pancreatitis—although again, the association is shaky, and most of the case reports involve individuals who also smoked tobacco heavily for multiple years.

There are now around 18 reports of individuals with acute pancreatitis (inflammation of the pancreas), whose conditions are ultimately blamed on cannabis due to heavy use in the period leading up to seeking treatment. In one case, the patient was observed for several weeks, and it was eventually found that his condition worsened after each time he smoked cannabis (which was brought to him at the hospital in secret by friends).

Therefore, it does seem that cannabis at least has a role to play, although it may also be that these individuals have a pre-existing condition which is somehow being exacerbated by consumption of cannabis. Or it may be that the effect is dose-dependent or depends on the activity of other signalling molecules.

Indeed, a recent study into anandamide levels in rats with pancreatitis found that anandamide could either reduce or increase the severity of the pancreatitis, depending on whether it was administered before or after administration of caerulein. Caerulein is a decapeptide known to influence gut motility and fluid secretions, and it’s also used to induce pancreatitis in experimental animal models.

Why do some people experience digestive problems with cannabis?

It is not clear why some people report these seemingly-contradictory effects of cannabis use, and it is not proven that cannabis is indeed the underlying cause. However, the sheer amount of anecdotal reports does tend to imply that cannabis use is in some way associated with the phenomenon.

One potential avenue of enquiry is other pre-existing conditions that can cause digestive problems, which may be exacerbated by cannabis use. For example, chronic stress is known to cause many sufferers to experience appetite loss, which is also commonly treated with cannabis. Many anecdotal reports of heavy cannabis use with appetite loss also involve symptoms of stress. Also, it is known that both cannabis use and chronic stress can alter the production and transmission of the “hunger hormone”, ghrelin.

Several factors might determine the likelihood of experiencing negative effects. Obvious considerations are dose, consistency and duration of cannabis use. But genetic differences between individuals might also be a factor. Often, a single mutation to a single gene can cause an individual to experience the reverse of what is deemed “normal”.

The potential negative effects of cannabis may sometimes be underreported by individuals that experience them. This may be due to fear of judgement or punishment, particularly in societies where cannabis remains illegal. But it may also be due to the pervasive trend for blind faith in cannabis’ healing properties and complete denial of anything that runs counter to that argument.

However, it is important that we move away from this tendency, in order to present an unbiased picture of the true potential that cannabis has to offer, along with its limitations and contraindications.

Cannabis truly does have numerous remarkable properties and a wide application within medicine, but it is disingenuous to state that it has absolutely no potential to cause unpleasant and debilitating side-effects in some individuals.

However, these side-effects are typically mild. Although in particular cases they may become severe, this appears to be limited to a tiny fraction compared to the total number who consume it regularly without detriment, for either recreational or medical reasons.

294 thoughts on “How Does Cannabis Affect the Digestive System?”