When it comes to cannabis, many people are under the impression that it is a “soft” substance that causes no harm. While cannabis definitely doesn’t pose the same kind of risks as some other, harder drugs, it is a little optimistic to suggest that it causes no harm at all.

Fortunately for cannabis users, there is virtually no threat of fatal overdose. But it is entirely possible to go overboard while dosing cannabis, which happens to most cannabis users at least once in their times as cannabis frequenters.

Can you overdose on cannabis?

Every substance is toxic if you consume too much of it. Even carrots and bananas can have negative physiological effects if you consistently consume high volumes of them. The same is true of cannabis. Thus far, there has not been any fatality caused by a cannabis overdose, although this is a contentious issue. But accidentally consuming too much is not entirely uncommon, so how much is too much?

To gauge this, there is a measurement known as Lethal Dose (LD), which is applied to all substances humans may consume, and is calculated on body weight. For example, the median LD for sugar is 30g/kg and for table salt is 12.35g/kg. This means that a lethal dose of sugar for an 80kg man would be 2.4kg, and for salt, would be almost 1 kg. Heroin, on the other hand, has a median LD of 50mg/kg for inhalation, but as little as 0.02g/kg if it is taken intravenously. For cannabis, the amount required for a lethal dose is much, much higher.

For tetrahydrocannabinol (THC), the psychoactive compound in cannabis, the intragastric LD with a sesame oil formulation is approximately 1.27g/kg (in rats).

In his book, Weed: The User’s Guide, author David Schmader points out that the average person would need to consume 750 kilos of cannabis in 15 minutes for it to be lethal. Most strains of cannabis sit around 15-20% THC, meaning that one gram of cannabis contains at most 200 mg of THC. It is virtually impossible to consume such a huge volume of THC via inhalation, although there is speculation that it is possible to overdose on THC if it is administered intravenously.

Despite the fact that it is nearly impossible to overdose on cannabis in the strict, fatal sense, it is entirely possible to overdose in a less deadly way. You can consume too much cannabis in much the same way that you can accidentally eat too many candies. It won’t be deadly, but there can be five uncomfortable symptoms to deal with.

1. Too much cannabis can cause a “white-out”

A white-out, or whitey, is a side effect of acute cannabis intoxication. The name derives from the first sign that one is underway – the colour drains rapidly from the face, followed by weakness, nausea or vomiting and even temporary unconsciousness.

Though an unexpected whitey can be distressing for most people, the symptoms are generally short lived. If it’s you that’s about to fall victim to the whitey phenomenon, it’s good to have a sweet drink or snack and then sit or lie down. If it is happening to a friend, you can offer them the same remedies. It should only take a few minutes for feelings of nausea and dizziness to subside.

It is commonly believed that a drop in blood sugar is responsible for causing a white-out. The dramatic loss of strength and onset of nausea certainly feels like a crash in blood sugar but there is virtually no scientific evidence to support this hypothesis. In fact, there are surprisingly few studies which give insight into the acute effects of cannabis on blood glucose levels.

When the effect of cannabis on blood glucose was studied in the late 1960s and early 1970s, most studies reported no significant effect on glucose levels. However, one study, researchers found that no hypoglycemia was found, but deterioration of the Glucose tolerance test occurred (GTT). Thus, it appears that smoking cannabis can result in higher glucose levels – exactly the opposite of what is commonly believed to be the case!

It’s hard to speculate on the exact physiology underpinning a white-out based on the results of outdated studies. On top of this, the cannabis that was being investigated at that time was usually analysed at 1% THC. Cannabis being smoked today is sometimes more than 20 times that potency, and studies conducted in the 1970s would not be indicative of the effect of cannabis strains today.

What to do when you white-out

There might not be any scientific evidence to support using a sugary snack as a treatment for a white-out, but it’s still an effective old wives’ tale. The most important thing to do when a whitey starts happening is to sit or lay down. This prevents any injury sustained by falling or passing out.

Then, it’s time for something sweet and sugary. A glass of orange juice or a chocolate bar should do the trick. Even if loss of consciousness occurs, it typically just lasts a few seconds. It is akin to what happens when you accidentally have one too many wines. You might vomit, you might pass out for a second, but it will all be okay in a couple of hours.

Can You Smoke Weed and Feel High the Next Day?

2. Too much cannabis may cause shakiness or tremors

Although cannabis is proving to be an invaluable treatment for tremor-causing illnesses such as multiple sclerosis and Parkinson’s disease, some individuals actually find that use of cannabis causes tremors in its own right.

While there do not appear to be any formal studies into this phenomenon, there is an abundance of anecdotal evidence to support it. Many users have reported a case of the shakes at least once, which usually lasts from a few seconds up to half an hour.

Possible reasons include the stimulating effects of THC on the central nervous system, or via interaction with the dopaminergic signalling system.

What to do when you’ve got the shakes

It’s important to distinguish between tremors resulting from acute cannabis intoxication and those that may arise as withdrawal symptoms in dependent users.

The best advice for an infrequent user who finds themselves feeling a bit shaky after using cannabis, would be to just breathe and relax! Wait for the symptoms to pass, and maybe consume a bit less next time!

If the tremors are part of cannabis withdrawal they should begin to subside after a few days, along with any other withdrawal symptoms, as the CB1 receptors in the brain return to normal functioning.

3. Cotton-mouth because of too much cannabis

Experiencing a dry mouth and throat after cannabis use is extremely common, and often it does not take much cannabis to induce this effect. However, during a heavy session, the dry-mouth effect can often increase until it becomes extremely unpleasant, to the point that even drinking water or other beverages makes little difference.

Cannabis causes users to experience cotton-mouth due to the presence of cannabinoid receptors type 1 & 2 in the submandibular glands (which produce 60-67% of an individual’s saliva). Cannabinoid agonists such as THC bind to the glandular receptors and block the action of saliva-inducing compounds such as norepinephrine and methacholine, leading to a decrease in the secretion of saliva.

How to get rid of cotton-mouth

If experiencing unpleasant cotton-mouth, remaining hydrated will mitigate the issue to some extent. For more complete relief, using a demulcent (a substance that coats a mucous membrane with a moist ‘film’) designed for oral use should suffice. Many different prescription medications can cause users to experience dry mouth, so there are numerous products commercially available to combat the problem. 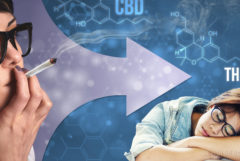 Can CBD Counteract the Effects of THC?

4. Paranoia is a symptom of too much cannabis

Even for the most seasoned cannabis user, consuming too much can lead to social paranoia. It is more common for inexperienced users to reach paranoia, because frequent users develop a tolerance towards cannabis. With that being said, no one is immune from this symptom after exposure to a little too much THC.

Not every cannabis user is affected in this manner. In fact, research suggests that if an individual is anxious, depressed or suffering from low self-esteem prior to using cannabis, they are more likely to experience paranoia following consumption of cannabis.

In one 2014 study, researchers tested this theory on 121 participants aged 21-50. One third was given a placebo while, one third was given THC, and one third was given THC combined with a ‘cognitive awareness’ manipulation. THC increased paranoia, negative affect (anxiety, worry, depression, negative thoughts about the self), and a range of anomalous experiences, and reduced working memory capacity. Making participants aware of the effects of THC (the ‘cognitive awareness’ manipulation) had little impact. This large study of intravenous THC demonstrated that the drug triggers paranoid thoughts in vulnerable individuals.

While the administration of THC in isolation has been shown to cause paranoia, the cannabis plant also contains terpenoids including limonene and alpha-pinene, which may mitigate such effects.

What to do when you experience cannabis-induced paranoia

If experiencing paranoia following use of cannabis, be sure to leave a significant length of time before next attempting to use it, and lower the dose to remain within comfortable limits. Ensuring that surroundings are comfortable and stress-free, and that one’s emotional state is calm and at-ease, should also go a long way towards mitigating feelings of paranoia.

Interestingly, in the study cited above, some users reported conscious judgement of their paranoia. For example, one subject who knew he was prone to such feelings was conscious of the fact that cannabis exacerbated his predisposition. Knowing such predispositions can also assist in navigating a paranoid cannabis experience.

Historically, ingredients containing the terpenes limonene and alpha-pinene have been used in antidotes for acute cannabis intoxication. Citrus fruits were used in 10th century Persia and pine nuts have been used since Roman times. A handful of pine nuts washed down with a glass of lemonade might go a long way!

5. Too much cannabis may cause psychosis

Psychosis is a broad term used to describe episodes of mental illness in which the sufferer loses touch with reality. Such episodes involve hallucinations, delusions, confused and disturbed thoughts and a lack of insight and self-awareness.

Such disorders affect around 3 % of people at some point in their lives, although rates vary substantially between countries and regions. Higher incidences are observed in younger people, ethnic minorities and in areas with a lower percentage of owner-occupied houses.

An association between cannabis use and increased incidence of psychosis is well established, with previous meta-analyses have reported a 2-fold increase in the risk to develop a psychotic disorder in cannabis users compared to nonusers. But does cannabis actually cause psychosis, or are those people who are predisposed to psychosis also drawn to cannabis?

Most coverage, particularly in the mainstream media, gives the impression that the existence of a causal relationship between cannabis use and psychosis has been established.

Yet an equally convincing counter-argument can be presented. The nature of mental illness and psychosis is complex, and we are yet to understand which came first: the chicken or the egg? It may be that onset of mental illness causes a person to self-medicate with cannabis, and the two become intertwined. Virtually nobody denies a correlation between cannabis and psychosis.

What to do if you experience psychosis

This polarised debate is likely to rumble on for many years. In the meantime, those who find that their psychotic symptoms are worsened or amplified by cannabis use should perhaps consider cutting down or taking a break altogether.

Another possible solution for those who experience symptoms of psychosis following cannabis use is to ingest CBD instead of THC. While THC is a known psychoactive compound, CBD is constantly being researched for its anti-psychotic properties. A more balanced cannabinoid profile may provide a more balanced experience for someone prone to psychosis.

500 thoughts on “5 Effects of Smoking Too Much Weed: Can You Overdose?”