Terpenoids and terpenes are aromatic compounds that are found in thousands of plant species and are responsible for the various flavours and fragrances of cannabis. We have known about their presence in cannabis for decades, but it is only recently that awareness of their potential therapeutic properties has begun to expand.

Terpenes are a large class of naturally-occurring organic compounds. Terpenes and terpenoids are only slightly different from one another and the terms are commonly used interchangeably.

Terpenes are basic organic hydrocarbons found in many plants, including cannabis. Everyday consumers would better know them as the essential oils that come from the flower’s sticky resin glands.

Basically, terpenes are the wet version. Terpenoids are what terpenes become once the cannabis has been dried and cured.

The isoprene rule and its relevance to terpenes

Limonene, which is comprised of two linked isoprene units, can be expressed as (C5H8)2, which equates to C10H16. Several other terpenes also have this structure, but the two isoprene units are arranged differently. Together, they are known as monoterpenes (the mono- prefix refers to the number of complete terpene units; i.e. one terpene unit equals two isoprene units).

The cannabis plant produces cannabinoids through a convoluted series of chemical reactions that is thought to involve terpenes as ‘building blocks’. Cannabinoids are known as terpenophenolic compounds, as they are comprised of terpene blocks attached to phenol (C6H6O) groups. And seeing that terpenes and cannabinoids share the same precursor, an abundance of terpenes is usually a sign of high cannabinoid levels.

Which terpenes are found in cannabis?

It is thought that cannabis contains over 120 terpenes, although many of these are found in trace amounts and may have negligible, if any, effect.

The primary terpenes and terpenoids that have been identified in cannabis are limonene, myrcene, pinene, linalool, eucalyptol, y-terpinene, ß-caryophyllene, caryophyllene oxide, nerolidol, and phytol.

These compounds, unlike cannabinoids (although there are now indications that other plant species do contain some phytocannabinoids), are not unique to cannabis and many are in fact very familiar to us. The 4 most common terpenes in cannabis are:

Limonene is the monoterpene primarily responsible for the fragrance of citrus fruits — specifically, the D-isomer. D-limonene smells strongly orange-fragranced in its isolated form. It is widely used as a flavour additive in food production and an aroma compound in perfumery.

Limonene is used in alternative medicine, due to its observed ability to reduce heartburn and gastric acid reflux.

Research has shown that limonene may be effective for both chemoprevention and chemotherapy of cancer. At least, that is the case with this study on its effects of treating rodent mammary, lungs and stomach cancers.

Another very recent study (2018) verified this again regarding lung cancer in mice. It showed that limonene can promote autophagy, which triggers the death of lung cancer cells.

As well as this, limonene is used as a natural, renewable solvent in cleaning products, due to its ability to dissolve oils (it can dissolve even petroleum in about half an hour in the right conditions!) and other lipids. It is even capable of stripping paint and is considered an effective substitute for turpentine. Limonene must be handled with care by humans, as in high concentrations it can act as an irritant.

D-limonene is now also added to cannabis extracts as a flavour enhancer, as many of the existing terpenes are lost in processing.

Myrcene is another monoterpene, and is the most abundant terpene found in cannabis, making up over 60% of the essential oil of some strains. It is also found in bay leaves, wild thyme, hops, ylang-ylang, lemongrass and verbena.

Myrcene is responsible for the ‘green hop aroma’ found in dry-hopped beers (beers that have hops added post-fermentation at low temperatures to enhance their ‘hoppy’ flavour). The aroma itself is described as resinous, herbaceous, and slightly metallic—and very pungent at high concentrations.

Another plant that contains significant myrcene is Myrcia sphaerocarpa (Myrcia is the genus for which myrcene is named). It is a small shrub with astringent leaves and roots, which is native to Brazil and has long been in use there as a treatment for diarrhoea, diabetes, and hypertension.

Myrcene has been demonstrated to produce analgesic effects in laboratory testing on rats. Used with  limonene, along with the terpenoid citral (found in many citrus fruits, lemon myrtle, lemongrass, and lemon verbena) it has also been found to exert sedative and motor relaxant effects in mice.

Pinene is another monoterpene, which occurs naturally as two isomers (molecules with the same chemical formula but different structures). These isomers are known as α-pinene and ß-pinene. They are usually sourced from turpentine (produced by dry distillation of coniferous wood) and make up 58-65% and around 30% of its total volume, respectively.

A-pinene is known for its inhibitory effect on root growth in many plant species, thought to occur through the production of reactive oxygen species that cause oxidative stress within the root system. It is believed that many plant species exude it from their leaves as a natural herbicide, preventing other plants from competing against them for resources.

In an animal study, pinene exhibited anti-Infectious Bronchitis Virus properties. Another study demonstrated that pinene has a bactericidal effect in methicillin-resistant Staphylococcus aureus (MRSA), and an antifungal effect against Candida albicans.

Linalool is a monoterpenoid with the chemical formula C10H18O It is found in hundreds of plant species including mint, laurel, cinnamon, birch, and some citrus. Linalool is a chiral molecule, meaning that it has two enantiomers, or two isomers that are non-superimposable mirror images.

Linalool’s main medicinal function is as an anxiolytic—an anxiety-reducing drug. Lavender has been in use as a calmative for thousands of years, and recent tests on rats have borne out its effects to modulate locomotion and motor movements.

Other noteworthy terpenes & terpenoids in cannabis 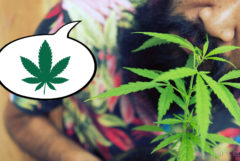 Of course, terpene and terpenoids concentration will vary between strains and between related individual plants. It can even vary between two clones of the same plant, if subject to different environmental conditions while growing.

Understanding which terpenes/terpenoids a strain contains can be important, as the type and concentration of each will affect the high it generates. For example, here’s a look into the main difference between dominant terpenes in indica type strains and sativa type strains:

Indica strains seem to be dominated by the presence of β-myrcene, with α-pinene or limonene being present in slightly lower concentration. Having a high concentration of myrcene, these strains will likely have a relaxing, sedative effect.

If it’s the latter, the strain will probably produce more of the typical euphoric, uplifting high.

However, here’s where it gets even trickier. While yes, indica strains are known to often have a high concentration of myrcene, researchers have noted that isn’t always the case. They’ve found that plants of the wide-leafed Afghani Cannabis indica type are more likely to contain high ratios of guaiol, isomers of eudesmol, and other unidentified compounds.

And plants of the narrow-leafed C. indica type that is indigenous to the valleys of the Himalayas are higher in trans–ß-farnesene.

The health benefits of these terpenes are not fully understood, but they may contribute to the differences in medicinal properties found between the different subtypes of cannabis. As our understanding grows, so too will knowledge of how best to develop and utilise new medical strains.

27 thoughts on “What Are Cannabis Terpenes and Their Medicinal Uses?”