6 Differences Between Medicinal and Recreational Cannabis

More and more countries and US states are legalising cannabis for medicinal use. Some have even legalised recreational use. But what exactly is the difference between medicinal and recreational cannabis?

Sensi Seeds has promoted the medicinal properties of cannabis for years. Knowledge about this has, for various reasons, been pushed to the background, despite the fact that medicinal cannabis was already used thousands of years ago. Fortunately, this natural medicine is currently making a glorious comeback.

At the same time, cannabis is the most widely used recreational drug worldwide. According to a report by the United Nations Office on Drugs and Crime (UNODC) in 2016 cannabis is more popular than heroin, cocaine, amphetamines, MDMA (ecstasy) and other illegal substances. A widely applicable medicine is therefore simultaneously the most popular recreational drug. This raises a question as to the exact differences between recreational and medicinal cannabis use. And how big are these differences anyway?

It’s a complex question that cannot be answered in a few sentences. However, looking at these six differences brings us to an interesting conclusion.

1. The differences between medicinal and recreational cannabis in ancient times

Mankind has known about the multifaceted effects of cannabis and industrial hemp for thousands of years. Numerous archaeological findings and ancient texts have also been found that indicate that cannabis and hemp have been used well before Christ.

The oldest evidence comes from China, where, among other things, the remnants of hemp fabric and pottery decorated with hemp rope have been found. Radiometric dating determined that these cultural relics were up to 6,000 years old and belong to the Yangshao culture. Ancient Chinese medicine also refers to cannabis while other texts describe the plant as “liberator of sin” and “giver of pleasure.”

Ancient Hindu texts written around 1400 BC probably also include references to cannabis as the plant that “reveals the gods”. According to Richard Rudgeley in his book, The Lost Civilizations of The Stone Age, these texts include the words ganjika (which closely resembles the word ganja) and bhanga (resembling bhang). Both are still widely used synonyms for cannabis in much of Asia and East Africa.

The Hash Marihuana & Hemp Museum in Amsterdam and Barcelona also shows the wide use of cannabis and hemp through the ages. The exhibits in these museums demonstrate that medicinal, recreational, spiritual and industrial use coexisted for a long time without any problems.

Cannabis was simply something that existed, and a person decided for him or herself what to do with it.

2. There are political differences between medicinal and recreational cannabis

There are several theories about the initial reason for the ban on cannabis. It is a topic that will certainly be discussed again on this blog. All theories are in any event based on the same fait accompli: the ‘Marihuana Tax Act of 1937’. The passing of this bill was the proverbial endgame, and marked the beginning of a global hemp and cannabis prohibition.

Now, almost 80 years later, the ban on cannabis is slowly beginning to crumble. Politicians increasingly realise that it is cruel to imprison people for using a plant that is not any more dangerous than alcohol or tobacco. The beneficial effects of cannabis are also being rediscovered and modern scientific research substantiates this effect. It is thus becoming increasingly clear why the plant has so many beneficial qualities.

All this helps to ensure that medicinal cannabis is being legalised in more and more places. Recreational use does, however, generally remain an offence. So while different uses of the cannabis plant coexisted peacefully for centuries, modern laws make a distinction between medicinal and recreational cannabis. 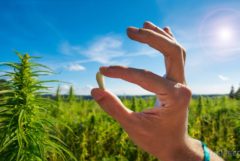 Recreational Rectal Use of Cannabis (Or, What I Did for Science)

Cannabis sativa and cannabis indica are two names for two types of cannabis. Taxonomically (and legally), there is no difference between indica and sativa; all cannabis plants are regarded as Cannabis Sativa L. The two terms are mainly used by the cannabis industry and users to differentiate between characteristics of particular strains so that they can be placed somewhere in spectrum of cannabis effects and patterns.

A multitude of different growth patterns and flavours can be distinguished in this spectrum. The effects differ as well. Sativa strains are usually described as energetic and uplifting, whereas indica strains are more commonly described as calming and relaxing. This is a generalisation as there is infinite potential for overlap of these effects, but this is a basic explanation of the difference.

In general, indica strains produce a calming effect and are therefore very popular as a way to relax and stimulate sleep. Medicinally, indicas are effective in the treatment of muscle spasticity and rigidity as a result of, for example, multiple sclerosis and Parkinson’s disease. Indicas also work well to ease symptoms of chronic pain, joint pain, insomnia, and neuropathy.

Sativa strains tend to have a more cerebral, energetic or uplifting effect. Sativa strains are commonly reported as more effective for the treatment of nausea (resulting from chemotherapy or HIV/AIDS medications, for example), appetite problems, migraine headaches, depression, chronic pain and similar symptoms. 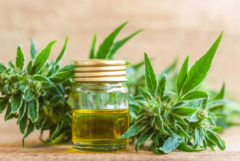 4. Differences in the way recreational and medicinal cannabis are used

Cannabis can be administered in various ways. Smoking a joint was once the most common way to use cannabis, but the expanding industry has given rise to many other methods, some of which are just as popular as smoking. However, inhalation of burning cannabis (and tobacco for those who mix) is not considered the healthiest or most medicinal option. Fortunately, since the advent of legalised medicinal cannabis, more attention has been paid to the different ways in which the active substances can enter the body.

A popular alternative is vaporising cannabis. Because no combustion takes place, only the active ingredients are released and no, or very few, harmful by-products, such as benzene, tar and carbon particles. Only the active compounds enter the blood by means of inhalation. Evaporation produces a very pure effect which acts quickly.

Cannabis can also be easily used in all kinds of foods and beverages. However, it is difficult to dose properly, and it takes a long time for the effects to kick in. Herein lies the danger of accidentally taking too much.

All these methods are used both recreationally and medicinally. The desired effect and purpose determine the choice here as well. There is one exception: CBD oil. This cannabis extract is used mainly for medicinal purposes.

5. Does the human body make a distinction between medicinal and recreational cannabis?

All mammals (and therefore also people) possess the endocannabinoid system.

The system possesses a variety of targets (receptors) that react to both substances. Researchers have so far identified two types of receptors: CB1 and CB2. CB1 is especially present in the central nervous system, CB2 particularly in the immune system. Various studies have shown that the endocannabinoid system influences, among other things, endocrine function, metabolism and energy balance, pain and emotional memory, appetite and all kinds of neural processes.

Cannabis therefore works in a very natural way together with the body’s own system. This makes cannabis a pleasant recreational substance, but also a medicinal plant that can alleviate or cure a variety of ailments.

The common goal of this cooperation is homeostasis. This is the ability of organisms to maintain a stable balance in the body, in spite of external agents that disrupt that balance. The process takes place in the background. People are often unaware that there is an imbalance. They are also usually not aware of the body’s reaction to restore balance until they gets sick, which is when the imbalance clearly manifests itself.

It has been scientifically established that endogenous cannabinoids promote homeostasis. Cannabis is therefore hypothesized to trigger the endocannabinoid system and to have a beneficial effect on a large number of imbalances.

6. Differences in the way medical and recreational marijuana are accepted by society

At the beginning of the cannabis legalization movement, many people were wildly opposed to it. This can somewhat be attributed to the lack of scientific research into its medical properties and therefore a misunderstanding of how it could be used medically. Since this time, a lot of time and energy has been spent researching cannabis and its medicinal properties, and understanding how these properties can be applied in modern medicine.

The verdict: is there really a difference between recreational and medicinal cannabis?

Now that we have looked at some areas where people often talk about medicinal and recreational cannabis use, we can conclude that the differences are minimal. They are mostly associated with politics and public opinion than science.

There is a tremendous amount of overlap between medicinal and recreational cannabis. Even medicinal users may experience some pleasure from using cannabis, and it can therefore be somewhat recreational (although not completely). By the same token, recreational users sometimes simply use cannabis to reduce stress and sleep better. This can be considered a medicinal quality of cannabis.

So the answer is vague and lies somewhere in between. There are only a handful of pharmaceutical drugs that are also used recreationally by some, but cannabis displays the biggest potential for overlap of these two ways to use a substance.

What do you think? Is there a difference between medicinal and recreational cannabis? Post your comment below.

23 thoughts on “6 Differences Between Medicinal and Recreational Cannabis”