As a plant of undeniable value to every culture that has encountered it, it is not surprising that local names for cannabis have arisen in many of the areas that its use has become established. With some of these names, it is possible to chart the spread of cannabis throughout the world.

We’ll explain the etymology of all the most commonly used words for cannabis, so let’s start with the one that we’re all familiar with:

A Proto-Indo-European (PIE) word root for cannabis gave us many of our modern cognates, including cannabis itself. The word root is thought to be *kan(n)aB-. *B represents a *p or *b bilabial stop consonant (made by pressing the lips together to block the passage of air; p and b being the most common sounds)., As languages have evolved over the centuries, this root has given us a range of cognates for cannabis and hemp including the Czech “konopí”, the Hebrew “qannabbôs”, and the English “cannabis”.

There is still some debate regarding the etymological lineages of some modern names for cannabis and hemp. For example, it is not clear whether the Hebrew “qannabbôs” (and its possible precursor kanbos) are derived from the ancient Greek “kannabis” or vice versa. Undoubtedly, we derive the modern word cannabis directly from the Latin cannabis, which is in turn derived directly from Greek.

It is thought that the Greek “kannabis” (the earliest recorded term for the plant) was a direct transliteration of an identical Scythian or Thracian cognate, which may in turn have evolved from the Proto-Germanic *hanapiz, a compound of Finno-Ugric *kéne (hemp) and *piš (to burn; nettle). However,  this is merely a hypothesis. Another holds that the etymology runs thus: Greek kannabis < Arabic kunnab < Syriac qunnappa < Hebrew qaneh or pannag (= bhanga in Sanskrit and bang in Persian).

Much controversy surrounds the precise etymology of many modern words, due to the complex interactions between disparate populations over the last few thousand years, which in some cases have led to words being loaned back and forth until their exact origins have become obscured.

It is certainly difficult to trace the etymology of hemp and cannabis. Their uses are so varied and abundant that many related words have found their way into many different languages, describing different uses or forms of the plant. However, it is believed that the two words ultimately derive from the same PIE root.

The modern word hemp, as well as the Dutch word “hennep”, the German “Hanf” and the Scandinavian “hamp” or “hampa”, are believed to derive from the *hanap- root, which in turn derives from *hanapiz. The consonant shift from k- to h- corresponds with Grimm’s Law, otherwise known as the First Germanic Sound Shift, in which many voiced consonants including k- began to shift to voiceless ones such as h- (also denoted as x-, which in modern German is pronounced like the -ch in “Bach”).

Marijuana, an obscure term prior to its popularisation by the U.S. campaign to prohibit cannabis in the 1920s and ’30s, may derive from the Nahuatl word “mallihuan”, meaning “prisoner”, although this may also be a case of coincidental homophony. It may also partly derive from the Spanish name “Maria Juana”, or “Mary Jane”.

This partly explains the emergence of various ritualistic practices linked to the Virgin Mary (Maria), such as the Doctrine of Santa Maria. This is a Brazilian religious group that ritualises the use of cannabis. Its development may also correspond to some degree to the introduction of the Chinese word “ma hua” (meaning “cannabis/hemp flowers”) to local vernacular as migrant workers were brought to the region.

However, the association between the two words may be much more ancient. Both marijuana and ma may derive from the Semitic consonant group mrr (most Semitic languages, including modern Hebrew, do not make use of vowels). The Chinese ma is thought to originate from the root mrj, pronounced *maraj or *mraj; the shared Semitic root is thought to have developed into the modern term marijuana via an Arabic loan word brought to Spain by the Moors. 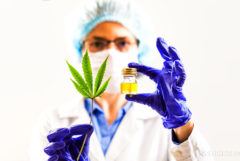 Should Strain Names Be Taken With a Grain of Salt?

While it might be difficult to trace the etymology for some of cannabis’ more scientific names, the passage of slang terms is much easier to follow.

The word “bhang”, as well as its various related cognates (Egyptian “banga”, Tamil “bangi”) is derived from the Sanskrit “bhanga”, which in turn is believed to be derived from the Hebrew “pannag” or “bannag” (p and b being largely interchangeable in Hebrew). The Sanskrit language is most closely related to the ancient Iranian languages Old Persian and Avestan, and it is believed that migrants from the north-west brought the term to India and Pakistan during the second millennium BCE.

In modern times, bhang and related terms for cannabis can be found throughout South Asia and much of Eastern and Southern Africa, as well as some areas in northern Africa. During the 10th to the 15th centuries, Arab, Asian and later Portuguese traders brought cannabis from Asia to East Africa, where it then spread throughout the continent by local traders and tribespeople.

In 1609, the Dominican priest Joao dos Santos described the practice of chewing cannabis leaves which South African locals referred to as ”bangue”, and from which an intoxicating drink of the same name was made.

Cannabis is known as “ganja” throughout much of the world, although the term originated in India. Ganja is a good example of a name that originated from one particular region and then spread elsewhere, as the cultural aspects of cannabis were exported along with the plant itself. Ganja may also ultimately derive from the same PIE root *kan(n)aB-, although if so, its passage into modern language occurred via different routes.

Ganja and related cognates (ganjari, gunja, kanchavu) are thought to derive from another Sanskrit term for cannabis, gañjya-, which may in turn have derived from a Sumerian word found on tablets dating back to at least 700 BCE, ganzigunnu, where ganzi- is cognate with ganja and -gunnu with qaneh or kunneh. The term ganzigunnu therefore neatly marries the Near Eastern word grouping with that of the Far East.

There is also some speculation that the word “ganja” is derived from the word “Ganga”, the Sanskrit name for the sacred Ganges river that runs through North India. In and around the Ganges, cannabis grows wild. 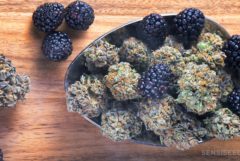 Other words for cannabis

There are several other terms for cannabis which do not originate from the PIE root *kan(n)aB-, but which may have some shared ancestry or more recent affiliation—such as the Mexican Spanish marijuana and the Chinese ma.

There are few substances on the planet that have acquired as many nicknames as the cannabis plant. Its use is so deeply embedded in so many cultures that naturally, many different names emerged. Some of these names are names of worship while some are simply the product of etymological evolution.

5 thoughts on “Cannabis Etymology: Names for Cannabis and Their Origins”