Choosing cannabis strains with sedative properties is all about the plant’s genetic makeup. Indica-dominant strains will be ideal for enhancing sleep, as they are renowned for their relaxing, full-body high. Sativa-dominant strains are known for their uplifting cerebral high, and may not be the best choice when looking for an evening strain.

The cannabis community is also focusing more on the terpenes and the entourage effect. Terpenes are the aromatic compounds that give cannabis plants their unique flavor profile, and they also influence the types of high we feel. Through multiple scientific studies, we have learned that specific terpenes like myrcene, terpinolene, and caryophyllene may contribute to the sedative and relaxing effects we feel from specific strains.

That said, here are 9 of the best cannabis strains for sleeping.

Hindu Kush is a classic landrace strain that was first discovered in the 1970s. It is a resilient pure indica with an extraordinary resin production that originated from the Hindu Kush mountain range stretching between Pakistan and Afghanistan. It was voted one of High Times’ top 25 strains of all time, and it has remained a fan favorite.

Its terpene profile is commonly dominant in caryophyllene, limonene, myrcene, and humulene. It has a sweet and earthy aroma with hints of spicy charas. The effects will most likely make you feel calm, relaxed and sleepy. With high levels of myrcene and caryophyllene known for their potentially sedative properties, Hindu Kush is an ideal strain for those looking to enhance sleep.

This strain is short and compact, with an average flowering time of 45 and 50 days. Growers can produce up to 450 grams per square meter indoors and substantially more outdoor. It is also highly resistant to mold, making it an outstanding strain for beginners. Seeds are available in regular, feminized, and automatic varieties.

Northern Lights’ top three terpenes are myrcene, caryophyllene, and pinene. Northern Lights has always been heralded in the medical community for its potential to help with pain and insomnia. It has incredibly potent effects that leave most users feeling slumped over in their chair. It is the true definition of couch-lock. Thus, Northern Lights, Northern Lights #5, or any hybrids with its genetics, tend to be great options for sleepy effects.

This cultivar is a fast-flowering plant which grows short and compact, thanks to its indica heritage. Expect a moderate yield of up to 450 grams per square meter inside, and over 550 grams per plant outside! You can get Northern Lights seeds as regular, feminized, and automatic seeds. Automatic seeds makes the grow process easier for novices, whereas experts might lean towards regular genetics. 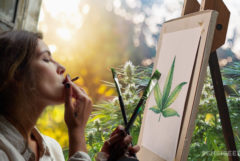 White Rhino’s terpene profile includes high levels of myrcene, pinene, and terpinolene. The result is a cannabis strain with notes of freshly picked grape with undertones of musky hashish. It only takes a couple of hits of White Rhino from a vaporizer to feel its intensely potent effects. Consumers feel an initial uplifting euphoria before being overwhelmed with a high relaxing full-body stone. It is advised to put your pyjamas on before consuming this strain!

Cultivators will love White Rhino for its short flowering time, between 45 and 60 days and highly resinous flowers. Due to its 90% indica, genetics expect White Rhino to be short and stocky. Outdoors, White Rhino can be harvested in October, and growers can expect substantial yields of over 500 grams per plant.

This strain flourishes in a Mediterranean climate and has an exceptionally flowering period of approximately 50 days. Throughout the growing cycle, the foliage will turn a beautiful shade of dark green, and during flowering, purple pigmentation can be expressed in both the flowers and leaves. Growers have reported extra-large yields, with the outdoor harvest falling in October. 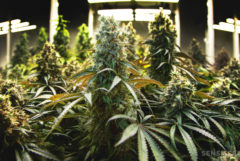 Blackberry Cake is an indica lover’s dream! It was bred by crossing Wedding Cake, Black Domina, and Durban. The result is a strain that is expected to produce a heavy full-body high, with calming and somewhat uplifting effects.

Blackberry Cake tastes sweet and fruity with slight gassy notes, but also has an earthy, somewhat woody taste to it. The variety of flavors shows how complex Blackberry Cake’s genetics can be.

This strain has typical indica effects, and the consumer can expect a soothing, long-lasting body stone that will put the user to bed.

It grows short and stocky, and can be cultivated indoors, outside or in the greenhouse. Blackberry Cake has the potential to produce an extra-large yield and boasts an average flowering period of 40 to 50 days. It may require a little extra attention throughout the growing cycle, but it is an ideal sedative cultivar!

Mr Nice G13 x Hash Plant combines two extremely potent strains to produce a highly sedating strain. It is a 100% pure indica strain created by crossing – you guessed it – Mr Nice G13 and Hash Plant. It has been known to have exceptionally high THC content with long-lasting effects that leave many people couch-locked.

Like its parent strains, Mr Nice G13 x Hash Plant has sweet and earthy flavors to it. The high is a long-lasting full-body stone, and is perfect for those looking for a sleepy cultivar.

This strain thrives outdoors in a warm, Mediterranean climate and has a flowering time between 60 and 65 days. Grown well, this strain can produce a large yield of up to 400 grams inside, and in optimal conditions well over 800 grams outside in open soil! You can get Mr Nice G13 x Hash Plant as regular seeds, which opens up the chance to do breeding projects with the strain. 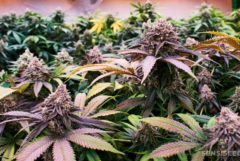 Master Kush is a cross between two landrace strains from the Hindu Kush area. It is a potent strain that produces sleepy effects for people looking for an effective sleep aid.

The combination helps give Master Kush a mix of citrus and earthy Kush aromas and flavors.

Additionally, these three terpenes have sedative, relieving, and uplifting properties, so it’s easy to see how Master Kush could make people feel sleepy.

During flowering, Master Kush flowers expressed a wide variety of purple, and orange-haired pistils amongst the dark green foliage. Master Kush produces short, compact plants and a medium yield. The flowering time is typically between 50 and 60 days, and this strain thrives in a cooler continental climate. 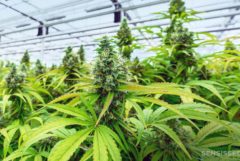 Big Bud was born in the Netherlands and proliferated in the United States during the 1980s.

It was created by crossing Afghani #1 and Northern Lights with Skunk #1, and has been used for breeding some of the hardest-hitting strains in the world.

Big Bud has a sweet, earthy, old school indica fragrance to it, and some describe the aroma as similar to molasses. This comes from the pinene, myrcene, and rare ocimene terpenes. Consumers can expect a sedative full-body stone; Big Bud is ideal for the evening as it is going to put you straight to bed!

Do-Si-Dos is a new school hybrid that consumers love for its pungent terpenes and relaxing effects.

It is a cross of Girl Scout Cookies (GSC) with Face Off OG.

It’s a well-balanced strain with earthy and gassy flavors, and Do-Si-Dos terpene profiles feature linalool, pinene, and limonene. Effects include an initial onset of uplifted euphoria before dissipating into a long-lasting full body-stone, guaranteed to send you to sleep.

For people who want to grow Do-Si-Dos, it requires some expertise and attention, but can be grown indoors and outdoors. To bring out those dark purple colors, you should initiate colder periods during flowering to bring out the anthocyanins in flower. Do-Si-Dos tends to have a pretty average yield, but the quality is undeniable. 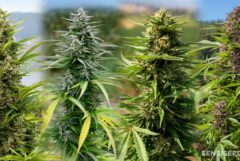 In the end, there are hundreds of cannabis strains that can help you sleep. As you have seen throughout this article, many are indica-dominant strains and contain terpenes like terpinolene, caryophyllene, and myrcene. Choosing the best ones is all about personal preference, but to find which sleepy strains are right for you, you will have to try them and see!