The Dagga couple started their journey as cannabis activists after their home was raided in South Africa and they were accused of drug dealing. After ten long years of fighting for policy reform, South Africa has finally loosened its laws with respect to personal cannabis use.

Who are the Dagga Couple?

Jules Stobbs and Myrtle Clarke together form the Dagga couple. They call themselves the Dagga couple after South Africa’s slang term for cannabis, dagga. Historically in South Africa, cannabis was punished as heavily as heroin and was categorized together with cocaine and amphetamines.

The team was working in the South African film industry before their pursuit of cannabis activism. The couple’s journey of activism started when their home was raided by the South African police and they were accused of being drug dealers. Since the event, the couple has been preparing to speak to the South African government for policy reform in the country.

The Dagga Couple are most well-known for the police raid that occurred to them in their homes. In an interview with Sensi Seeds, Myrtle said,

“Five years ago our house was raided by the police after an anonymous tip. They held us hostage for quite some time, and searched for drugs and a drugs lab. All they found was our cannabis stock for personal use. After this humiliating act we have been preparing for a court case to improve cannabis laws in our country. We call this case the ‘Trial of the Plant’.”

At the time of the interview, Jules and Myrtle were preparing for their Weedstock festival. It is a festival dedicated to cannabis culture in South Africa. The festival also helped the couple to raise funds for the Trial of the Plant. It was scheduled to be held between the 29th and 31st of January, 2016 near Johannesburg.

Unfortunately, the Weedstock festival was never held. Due to a petition and law enforcement, the Dagga couple could not legally go through with the festival. The couple was awaiting a single signature which didn’t come through, and they speculated that a third party was determined not to let this festival happen. 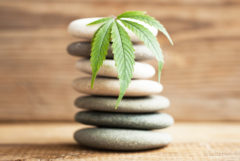 Cannabis and Yoga: The Perfect Pair?

Trial of the Plant

For Jules Stobbs and Myrtle Clarke, the Trial of the Plant was the culmination of a long road to bring the case for legal cannabis before the South African courts – not just for their own benefit, but for all who want safe access to the plant.

In the video from CNN below, we see how protestors funded by The Gauteng Department of Social Development (a state body) stood outside the courthouse, as they have from the beginning of the trial, waving near-identical placards and loudly chanting. They are from KwaZulu-Natal‚ and are staying in a Christian rehab centre, having been transported in especially for this purpose.

Understandably, these fake protestors were disheartening and frustrating for the Dagga Couple. However, they have psychiatrist‚ neurologist and world expert in the comparative harmful effects of drugs Professor David Nutt, a force far more learned and professional than a group of people mouthing empty words.

The video shows some of Professor Nutt’s testimony and cross-examination by Doctors for Life advocate Reg Willis; watch to the end to see Willis, unaware that he was still being recorded, call Professor Nutt “a moron”. Some people have absolutely no grasp on reality!

The beginning of change

In March of 2017, the Trial of the Plant came to a close, where judges ruled that the prohibition of cannabis use in the privacy of the home is unconstitutional. Then, in September 2018, 10 years after the Dagga couple began their pursuit of cannabis activism, the South Africa’s highest court legalized the personal use of cannabis in private domain. The ruling also approved the cultivation of cannabis for personal use.

The Dagga couple‘s hard work and persistence brought revolutionary policy reform to South Africa. For the first time since 1928, personal cannabis possession and use is not punishable in South Africa.

Check out their story in this report from Cannabis News Network

Lives outside of cannabis

Myrtle Clarke grew up in a conservative, Methodist family and was the daughter of a Methodist minister. She was born and grew up in kwaZulu-Natal but after finishing school, moved to Johannesburg to complete a fine arts degree. She worked her way across South Africa doing fine arts, and was even a chef.

At almost 40, Myrtle Clarke met Jules Stobbs and they moved to a farm in Lanseria, where they still live now. The couple worked in the film industry and were working on Big Brother when their house was raided for “Dagga”. Now, they are infamously known as the Dagga couple, though the two also stand by the fact that cannabis activism is one part of their lives which have also been rich with many other endeavours and passions.

We hope to see you again soon!