Anybody who has ever used cannabis owes their delight to the female aspect of the plant. This is because female cannabis plants contain greater concentrations of the much-loved cannabinoid, THC. For this reason, growers separate male and female cannabis plants to protect the females from pollination. Feminized seeds remove the need for this kind of “sorting”, as plants are basically guaranteed to be female.

Still curious about feminized cannabis seeds after reading this top 10 list of interesting facts? Great – that’s exactly what we were hoping would happen! There’s a lot more to know about feminized seeds and how they are used to minimise intersexuality. So if your curiosity is piqued, keep reading for some more in-depth information.

When you purchase a regular cannabis seed, there is a 50/50 chance that the plant will grow to be female. However, under certain stressful conditions, even a female plant can mature and develop intersexual tendencies.

In fact, this forms the basic principle of how feminized seeds were developed. But mitigating these intersexual tendencies is also the objective of developing stable feminized seeds. Sensi Seeds has been perfecting the process of feminized breeding for years now, all so that home growers can minimize the chance of intersexuality in their plants.

Unlike more complex organisms, cannabis is not firmly one sex or the other. It’s a very unusual species in that it is an annual plant that is also dioecious (producing separate male and female flowers on different plants). However, every cannabis plant has the ability to produce flowers of the opposite sex under certain conditions. It’s a survival mechanism for the species, allowing cannabis to succeed and reproduce while being both annual and dioecious.

Some plants become intersexual quite easily, in response to stress in the growing environment such as temperature fluctuations, light cycle irregularity, physical damage, etc. This is a survival response. The plant detects that growing conditions are not favourable, which means that its chances of reproduction are lower. Poor conditions mean that a plant is less likely to survive the full season, and also that there’s less chance a plant of the opposite sex is close enough to cross-pollinate. 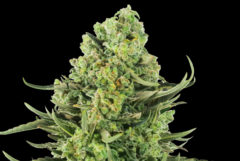 When feminized seeds were first being developed, breeders used two female plants to cultivate feminized seeds. One was identified as having hermaphrodite tendencies (prone to producing male flowers when stressed), while the other did not have this tendency. Light cycle irregularity and pruning were used to stress the intersexually-prone plant into producing male flowers. The pollen from this plant was then used to pollinate the other female plant.

There was a costly disadvantage to this method. As the “pollen donor” was a plant with strong intersexual tendencies, there was a very high likelihood that this tendency was passed on to the subsequent seed.

By the time Sensi Seeds and White Label decided to offer feminized seeds, the process was already infinitely better. Using different techniques, female plants with a very minor tendency to turn intersexual were forced to produce male flowers. This meant that their offspring had no more tendency than a normal female cannabis plant to turn intersexual.

For this technique, there was no need for a female plant that had a strong intersexual tendency, unlike earlier, developing methods. Therefore, the possibility that a plant grown from a feminized exhibits intersexual traits was drastically reduced. This is how the feminized seeds offered by Sensi Seeds and White Label are produced.

In short, intersexuality is a fundamental part of the cannabis genome. Each individual plant simply has a greater or lesser tendency to turn hermaphrodite in response to different conditions. There is unfortunately no way of predicting a plant’s predisposition to hermaphroditism. With that being said, feminized seeds are no more likely to be hermaphrodites than any other seed, thanks to new techniques and technologies.

22 thoughts on “10 Most Interesting Facts About Feminized Cannabis Seeds”