10 Most Useful Mind-Enhancements of a Cannabis High

Throughout history, many important figures have used cannabis as a form of mind enhancement. Whether for academic revelation, creative expression or simply personal insight, cannabis has served as a vehicle into deeper aspects of the mind.

The mind enhancements mentioned in this article are drawn primarily from Sebastian Marincolo’s book, “High. Insights on Marijuana”. In his book, Marincolo breaks down many of the mental phenomena that cannabis users around the world have reported.

First, however, a note of caution: as with other mind-enhancing substances, there certainly is no “total enhancement” of mental abilities during a high. Some cognitive abilities are enhanced, while the performance of other processes may decline.

Different strains also affect the kind of cognitive enhancement that occurs. While sativa dominant strains may enhance creativity and energy, indica strains may create a more relaxed cognitive effect. On top of that, different disciplines necessitate different effects. A writer at his desk is looking for a very different kind of cognitive enhancement to a dancer on stage. In this way, every cannabis user is urged to exercise discretion about strain, dose and the productivity of those results.

Understanding how to nurture mind enhancements

As Timothy Leary pointed out in his book, “The Psychedelic Experience: A Manual Based on the Tibetan Book of the Dead”, set and setting are vital to having a safe psychedelic experience. This is relevant to the LSD experience, cannabis, and the use of any other psychedelic substance.

Although mind enhancements may occur spontaneously during a psychedelic experience, there are ways to nurture it so that it can remain safe, non-addictive and overall, productive. The set and setting are vital to this nurture. For example, a person wishing to unravel some internal habits may not choose to take psychedelic substances at a party or a wedding. Rather, a quite, safe and possibly “religious” set and setting can be created to further support that kind of introspection.

The concept of set and setting are not new by any means. They have been practiced for millennia by those civilizations whose way of life revolves around the use of psychedelic plants. Amazonian tribes only consume psychedelics in “ceremony”, where strict rules must be adhered. In India, tulsi is consumed in a group setting, but in complete silence. These are examples of set and setting.

For some people, it is enough to consume a psychedelic substance — the mind enhancement naturally follows. For others, it may be conducive to create the correct set and setting, and this is why it is vitally important to understand how to nurture and protect your own mind enhancements.

Without further ado, here is the list of ten of the most useful mind-enhancements induced by a cannabis high:

During a high, cannabis users hyperfocus on whatever comes to their attention. It may be a sensation, a thought, a memory, an emotion or an object. We experience more depth and detail in whatever we perceive or give attention to. The Belgian poet and painter Henri Michaux experimented a lot with hashish and noted:

“(w)ith Hashish in me I am a falcon. (…) I look for an object in order to follow a trail. If it is a face, then through that face I will follow the trail to the ends of the earth. Nothing can distract me.“

The “hyperfocus” effect on attention presumably plays a major role in the often reported subjective intensification of sensory experiences during a high. During a high, a person may discover new aspects of sensations, whether it be the flavour of a mango, the smell of a pine tree or the tactile sensation of a kiss. All of the senses become hypersensitive to stimulus.

For the record, this may be the same thing that causes sensations of anxiety in certain people. In particularly stimulating environments, hypersensitivity may create nervous tension. In this way, it becomes obvious how this mind enhancement may quickly become a curtailment.

Much Zen and Buddhist philosophy rests on the principle of attention. Attention to a single thought can create the sensation of being in the “here-and-now”. Cannabis’ contribution to increased sensitivity and hyperfocused attention may help a person to dwell in the here-and-now of existence. You concentrate on your sensory experience and on your bodily awareness. Past and future become less important. You breathe, feel, perceive, and re-connect with yourself. I have also called this the “Zen-effect” of cannabis.

The often-reported enhancement of episodic memory is one of the most stunning effects of a cannabis high. This effect was reported specifically by Carl Sagan in his article, “Mr X”. Episodic memory refers to memories of autobiographical events. Episodic memory can be extremely vivid, allowing a person to remember very fine details of a previous event, such as the smell of someone’s kitchen or all of the sounds at a birthday party. Interestingly, users often report a feeling of “re-living” the memory as if transported directly back into the experience.

Another incredibly useful effect of the cannabis high is the intensification of your imaginative abilities. We tend to underestimate the magnificent potential of this enhancement. First, we tend to think of imagination only as the ability to visualize images. But our ability to imagine also includes our ability to imagine how flavours of rosemary and potatoes combine, the tactile feeling of jumping in a cold lake, or the sound of a melody in the composition process.

Second, we use our imagination not only to dream up situations. As neuroscientists like Michael Gazzaniga and Antonio Damasio have reminded us, we crucially need our imagination to make decisions on an every-day basis. When you decide to marry your girlfriend you go through imagining situations, how it would be to live with her for the rest of your life, how your girlfriend would be as a mother, etc. 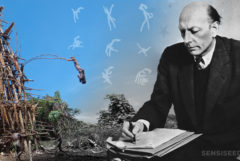 Henri Michaux & Cannabis: On Cannabis and the Mind

Countless users have reported perceiving new patterns during a high; patterns in nature, in art, in their own behaviour or in the behaviours of others. Needless to say, this is one of the most critical mind enhancements of a high. We can look at Archimedes of Syracuse as an example of pattern recognition, who used the movement of water in his bathtub to find a way to identify impurities in gold. Two seemingly unrelated concepts shared a pattern for Archimedes in this circumstance, leading to a discovery in chemistry.

For personal use, pattern recognition can be as profound as helping to break addictions. Once a person understands the patterns of their own habits and routines, they can be transcended.

Overall, introspective insight is a spontaneous event. With that being said, over the millennia of religious enquiry, civilizations have found certain situations that may elicit introspection. While in Buddhism, meditation is one such exercise, in others, that exercise is the use of psychedelic plants. We don’t know why certain psychedelic plants create the perfect environment for personal introspection. It is a great mystery that is held in sacred regard in many cultures such as the Amazonian tribes of South America who consume Ayahuasca, and the Rastafarians who consume cannabis.

Perhaps the combination of hypersensitivity, hyperfocus, enhanced pattern recognition and enhanced imagination altogether leads a person to profound introspection. This may manifest as insight into one’s own character and behaviour, finding a lost object, or the fulfilment of ancestral patterns.’

Humans have incredible empathic skills. We can read emotions and moods from facial expressions or body language. We have countless detailed reports from users that a cannabis high helped them to put them in the shoes of others, to understand how others tick and feel. Recently, some courageous mothers have started to treat their strongly autistic children with cannabis with much success.

Empathic understanding is vital for human evolution. Without such a necessary tool, we may not have such noble professions as nursing or community care. Interestingly, this phenomenon is thought to occur via specific neurons in the brain called “mirror neurons”. These are neurons that discharge both when an individual is performing a behaviour and when they observe a behaviour. In this way, these neurons give the capacity to internalise an external feeling or behaviour. Defects in mirror neurons have been linked to autism.

It is not clear why cannabis enhances this ability in people, and in fact, it is a completely neglected aspect of cannabis research. In any case, it has been observed and reported by many cannabis users, as poses an interesting starting point for future research.

Cannabis and Sex – What A High Can Do for Your Libido

Many users have reported that a cannabis high enhanced their experience of lovemaking. Looking at the enhancements above, it should now be easy to see why. High lovers are more in the here-and-now of existence, concentrate on their partners and understand them better, and their tactile sensations become more intense and richer in depth. They can explore and experience an orgasm more profoundly, break habitual patterns, and are more likely to try new things. The slowing of time and the expansion of the mind are synonymous with the “eternal” or “timeless” sensation of an orgasm.

Carl Sagan famously reported that he had insights on the invalidity of racism during a cannabis high. He subsequently used soap to draw a Gaussian distribution curve on his shower wall to illustrate his point. There is a long tradition in psychology that explores the phenomenon of spontaneous insights since the early days of the German psychologist, Max Wertheimer’s Gestalt psychology school.

Creativity is an extremely difficult quality to measure and define, and modern science has stumbled at this point many times. Creativity is sometimes manifested as the ability to adequately convey complex ideas and concepts, whether it is a painting, a piece of music or a sculpture. However, many cannabis users (including famous ones) report that cannabis somehow increases creative output.