“As long as habit and routine dictate the pattern of living, new dimensions of the soul will not emerge.” – Henry van Dyke, short story writer and essayist, 1852-1933

The importance of pattern recognition

We can visually recognize and distinguish types of trees, cars, or the painting style of Edgar Degas, for example. We perceive not only visual patterns in our environment, but also hear patterns in sounds or music; we perceive the tactile pattern of a wooden surface, the gustatory pattern of mango taste, and we can intellectually “recognize” patterns as for instance the pattern of a certain tactic used by an opponent in a chess game.

We easily recognize thousands of human faces despite their change over time, and recognize places and objects even under completely different lighting conditions. We can recognize the auditory patterns of a flying wasp, the roaring of a Porsche 911 motor, or the inimitable style of legendary pianist Dinu Lipatti interpreting a Chopin waltz. Patterns are everywhere, and their perception, memory and recognition are imperative to our survival.

We have numerous reports from marijuana consumers about the enhancements of various types of pattern recognition abilities. The Harvard psychology professor Charles Tart evaluated enhanced pattern recognition as a characteristic effect observed by marijuana users during a high in his study “On Being Stoned”. About a third of the questioned students agreed with the following statement as correct for a strong or very strong high:

“I can see patterns, forms, figures, meaningful designs in visual material that does not have any particular form when I’m straight, that is just a meaningless series of shapes or lines when I’m straight.” [1]

Tart’s study shows that marijuana users not only report this enhanced pattern recognition ability for visual patterns, but also for the perception of all kinds of patterns perceived through various sensory channels.

I myself have repeatedly noted that during a high I find myself able to better understand foreign languages, a fact also noted by some contributors to Lester Grinspoon’s website project marijuana-uses.com (see “Lady Chatterley Stoned” and “(Some experiences With) Language and Learning”). Another anonymous contributor “Rob” describes how a high made him recognize a pattern of “timid rigidity” in his walking style:

“I was also fortunate in that I got high that night, as many reefer virgins report not getting high the first time they smoke. An amazing understanding came to me while walking home. As I strolled along the tree-lined sidewalk carrying on a conversation with a friend, I felt an awkward stiffness in my stride, realizing with each step a timid rigidity. I have since altered my manner of walking to a confident, open gait of long strides and silent footsteps.“

Rob’s experience shows what many reports about enhanced pattern recognition during a high have in common – a shift in attention. Rob does not primarily attend to the conversation anymore, but to his own body and his walking style, allowing him to perceive a pattern he was unaware of before.

Other marijuana users have reported similar pattern recognition processes, where they shifted their attention away from the verbal content of a conversation to the body language of their conversation partner. 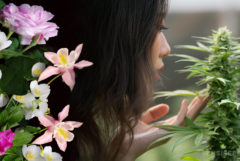 Why do we discover new patterns during a high?

I am sure that there are many more alterations of cognitive processes during a marijuana high which allow users to better perceive patterns of which they were previously unaware. The hyperfocus of attention during a high certainly helps many users to come to a more acute perception of patterns in whatever they attend to.

Also, an enhanced episodic memory probably helps to ‘re-cognize’ patterns which are similar to patterns seen before; if I better remember my last encounter with a Dalmatian dog, this will help me to better see the pattern of a Dalmatian in a picture:

On a deeper, neurological level, I have suggested in my book “High. Insights on Marijuana” (dogear publishing 2010) that marijuana leads to a synesthetic effect (or, with lower doses, to a ‘pre-synesthetic’ effect) which according to the neuroscientist Vilayanur Ramachandran plays a major role in the explanation of pattern recognition.

Rob’s story above also beautifully illustrates that the recognition of a pattern plays a major role in transcending this pattern. Rob had to first understand that his walking actually follows a pattern to be able to make a conscious decision to break it, if he feels that he wants to escape this pattern.

Ultimately, then, a marijuana high not only allows a user to perceive new patterns in nature, music, art, in the workings of society, in the behaviour of others or in himself. It also allows him to break with unwanted and previously unconscious patterns.

This is not only one of the most important preconditions for creativity, but, also, an almost inexhaustible source for personal growth. A marijuana high may lead you to understand that you follow a routine pattern in lovemaking and help you to transcend it. You may find out that you follow a learned routine when dealing with family issues or that you keep on reacting to stress in a bad way.

If you use marijuana in the right way, if you learn to surf a marijuana high, then it can help you to understand and get away from many unhealthy routines and patterns of behaviour, which is why it can be helpful in the treatment of various addictions and help you to grow as a person. 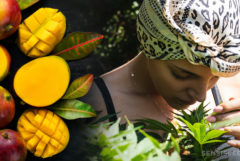 What does it mean to be ‘high’?

Marijuana can alter your consciousness in a way that enables you to take a different perspective on patterns in life, as if you were looking from high up, to see and evaluate your live and the lives of others in a privileged way. You can see different patterns in life and in reality, patterns unfolding in space and time, patterns normally invisible to you.

The movie Koyaanisqatsi uses time lapse to reveal the recurring patterns of daily life. It shows for instance a bird’s eye view of a long city street with cars going through synchronized traffic lights.

What we see is a dance to some mechanized rhythm. We come to understand we are all dancing to this and other rhythms without noticing it anymore. Marijuana can give you a similar new perspective on patterns in life.

It is as if you were standing on a hill looking down at your neighbourhood and realizing the generic pattern in which you and your neighbours have spent your lives, in those “little boxes on the hillside, little boxes made of ticky-tacky, (…) little boxes all the same”, as Malvina Reynolds once expressed in what would later become the theme song to the acclaimed comedy series “Weeds”.

Maybe this euphoric and elevating feeling of looking at life’s patterns from this ‘high’ perspective, and then transcending them, is the inspiration behind the slang term ‘high’ itself. For me, to be ‘high’ certainly has that meaning. 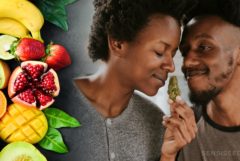 7 Fruity Strains-High in Limonene and Terpinolene