“There is more wisdom in your body than in your deepest philosophy.”

How do we localize and identify a tickle right under our shoulder? A burning feeling of pain on the neck? How does our brain manage to balance on two feet when we walk, and how do we know how our body is located in space even when we close our eyes?

In their book “The Body Has a Mind of its Own”, Sandra and Matthew Blakeslee sum up their answer to these questions:

“Every point on your body, each internal organ and every point in space out to the end of your fingertips, is mapped inside your brain. Your ability to sense, move, and act in a the physical world arises from a rich network of flexible body maps distributed throughout the brain – maps that grow, shrink, and morph to suit their needs.” [1]

The body mapping system and the enhancement of bodily sensations

The Harvard psychologist Charles Tart mentions in his study “On being Stoned” that marijuana users feel that a high can help them to better introspectively access their current bodily sensations and feelings. Many of the users surveilled confirmed the following effects as a „common“ effect of a marijuana high:

“Pain is more intense if I concentrate on it”

“My perception of how my body is shaped gets strange; the ‘felt’ shape or form does not correspond to its actual form (e.g. you may feel lopsided, or parts of your body feel heavy while others feel light”

“I feel a lot of pleasant warmth inside my body”

“I am much more aware of the beating of my heart” 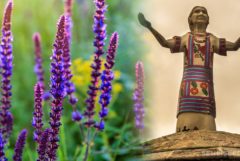 According to neuroscientist Antonio Damasio, we all have an interoceptive sense which gives us a sense of the body’s interior. For Damasio, this inner sense rests on a representational mapping system (also called the “somatosensory system”), which has developed in order for us to screen internal bodily states such as

Could it be that marijuana interacts with this body mapping system? We also know that large doses of marijuana can lead to “body image distortions”, which are also often described in literature. In a report of a stoned experienced under the influence of a high dose of ingested hashish, the American writer Bayard Taylor (1825-1878) wrote:

“This report shows that a marijuana high can strongly affect one’s body imaging system – and it also shows that it is a matter of dosage and use whether marijuana can help with introspection or not. Whereas a decent high might help with intensifying bodily sensations and bringing them to our awareness, a higher dose might lead to misrepresentations and distortions of our inner body mapping system.“ [4]

How to lose your body during a high

Tart also notes in his study that under stronger doses of marijuana, users often seem to forget about their bodies. Many users agreed with the following descriptions as common effects for a strong high:

“I have lost all consciousness of my body during fantasy trips, i.e. gotten so absorbed in what was going on in my head that my body might as well not have existed for a while.”

“I have lost all consciousness of my body and the external world, and I just found myself floating in limitless space (not necessarily physical space).” [5] 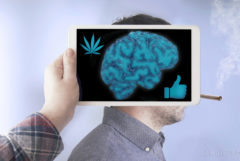 The Neuroprotective Effects of Cannabis

How can we explain that? One explanation would be that even though marijuana stimulates the body imaging system in a way, it also stimulates other capacities such as imagination and episodic memories in a way so that our attention sometimes gets strongly drawn away from our bodily sensations and shifts to phantasies or memories. Ultimately, though, this is just a hypothesis at this point.

These observations raise interesting questions. How does marijuana affect the body mapping system? We know that other effects of marijuana strongly depend on its interaction with the already existing endocannabinoid system in our brain. We also know, for instance, that endocannabinoids play a role when it comes to the process of thermoregulation – what are the other functions in the body mapping system? How do various endocannabinoids play a role in the regulation of this system?

And how do exogenous cannabinoids – that is, cannabinoids coming externally by the consumption of cannabis – play a role affecting this system? Will a strain with higher level in CBD affect the body imaging system in a different way to other strains?

I am convinced that these questions might lead to really interesting developments in science and medicine. It’s high time to investigate. 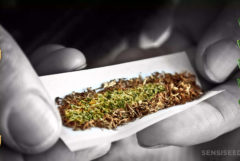 [4]   Taylor, Bayard (1863). The Land of The Saracens, or Pictures of Palestine, Chapter X, Asia Minor, Sicily and Spain. http://www.online-literature.com/bayard-taylor/lands-of-the-saracen/(hypertext version 2009).