The truth about cannabis and your white matter

Recently, a study published by King’s College, London caused a media frenzy as it associated heavy use of potent cannabis with structural changes to the brain, most notably a decline in the quantity and integrity of the white matter.

As is so often the case with such studies, certain media outlets immediately leapt to wild assumptions that cannabis was to blame for this perceived difference in brain structure, and that policy changes needed to be immediately made to reflect this. But is this truly the case?

Again, as so often occurs with these studies, when we look a little deeper into what is said in the text, we find that there is a lot more to the story than these simplistic media articles would have you believe.

What was this study about, exactly?

Before we wade into the various faults of the study, let’s take a quick look at exactly what it says. The paper took a sample of 99 people, 56 of whom had reported a prior psychotic episode, and assessed their brain matter using MRI scans of a specific type known as Diffusion Tensor Imaging (DTI). This advanced technique measures in 3D the rate of diffusion of water molecules through tissues of the body, and allows users to analyze specific tissues and structures with astonishing precision and detail.

The scans assessed white matter, which is made up of densely-packed bundles of myelinated axons (nerve fibres) and connects different areas of the grey matter together. The grey matter houses the neurons themselves—one way to look at it is the neurons generate the information and the axons carry it to new neurons, which then act on it. The study particularly investigated the corpus callosum, which connects the left and right hemispheres and is the largest white matter structure in the brain.

What did the study find?

An important measurement with DTI scanning is mean-diffusivity (MD). This measurement is one way of determining the rate at which water molecules diffuse through tissue, and when MD is higher than normal, it is thought to be associated with reduced density of axon bundles, and damage to the myelin sheaths that surround and insulate each axon and allow signals to rapidly pass along their length.

By measuring the corpus callosum, the researchers found that the heaviest cannabis users exhibited the greatest increase in MD compared to non-cannabis-using controls. This association was seen across the board in heavy cannabis users, even those that had not experienced psychosis.

One of the lead researchers, Dr Tiago Reis Marques stated, “‘This white matter damage was significantly greater among heavy users of high potency cannabis than in occasional or low potency users, and was also independent of the presence of a psychotic disorder”.

Another head researcher, Paola Dazzan added, “There is an urgent need to educate health professionals, the public and policymakers about the risks involved with cannabis use”. 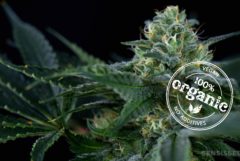 What’s wrong with the study?

So what’s wrong with the picture? Well, first off, it seems that both the media and the researchers have committed the cardinal sin of conflating correlation with causation. Yes, there is an association between the rate of potency of cannabis use and with these structural differences, but there is nothing in the study to suggest that cannabis caused these changes.

Furthermore, the potency of the cannabis that the study subjects self-reported as using was categorized simply as low potency (hash-like) or high-potency (skunk-like); without making a better effort to determine cannabinoid levels and ratios, this appears to be somewhat of a useless designation. The study also did not determine how much cannabis was consumed by each subject, for how many years, or whether other substances were used alongside it.

As well as this, some have mentioned the small size of the sample and the difficulty of extrapolating meaningful results from this. However, the sample size is not exceptionally small for a preclinical study such as this. What is certainly true is that firm conclusions in media reports have been drawn from inconclusive data (along with misleading statements from researchers that should know better) that by its very nature necessitates the need for further research.

What would a study that actually proved a link look like?

The paper in question is a cross-sectional study, which looks at different sample groups at a given point in time and compares certain variables to identify possible associations. By their very nature, cross-sectional studies are unable to determine cause and effect, as they do not look at time trends. In this case, the researchers cannot say if the changes were already there, so they cannot state they occur as a result of cannabis use, however strongly they may feel it implies it.

Cross-sectional studies are also inherently limited in that they directly compare a restricted set of variables from which to draw conclusions, and do not control for other confounding factors. In this case, the perceived damage could be caused by something entirely other than cannabis use, which the researchers simply did not account for, such as alcohol or tobacco use.

In order to prove that cannabis use causes structural changes to the brain in humans, it would be theoretically possible to conduct a randomized controlled trial in which cannabis would be administered to previously-inexperienced subjects and any rate of change observed.

However, for ethical and legal reasons, this would be impracticable, as if brain damage were to result, those previously healthy subjects would obviously be very displeased, to say the least, and they and their families would no doubt be looking into legal action! Of course, in the UK, where this study was conducted, cannabis remains illegal save for a tiny list of approved conditions, so there’s another reason that this type of research can’t happen. It can be conducted on animals, but that’s of limited usefulness when looking for answers specific to humans.

Thus, researchers must content themselves with looking at people who voluntarily consume cannabis and are prepared to be studied. So, the best choice when attempting to establish cause and effect is to use a longitudinal cohort study, which follows the same group of individuals over time and tracks changes in consumption habits (as well as other lifestyle factors) and compares them to observed physical changes.

There have been a handful of longitudinal studies investigating cannabis and mental health, but apparently none that have specifically investigated cannabis’ effect on the white matter (save for one that looked at teens who used both cannabis and alcohol, and which implied that alcohol was particularly likely to be responsible for white matter degradation).

Of course, the gutter right-wing press pulled no punches, with The Sun memorably proclaiming that “Scientists warn smoking ‘skunk’ cannabis wrecks brains” and The Mail trumpeting “Proof strong cannabis DOES harm your brain”; this egregious distortion of the facts was enough to motivate the UK’s National Health Service to publish an article debunking the sensationalist reports.

However, despite the flaws in the study and the media reporting on it, it does at least indicate the possibility that cannabis could, in fact, be what’s causing the change, and thus its findings should not be dismissed out of hand. To do so would be to fall into the same trap of assuming the question is settled, when in fact it has only just begun to be answered.

13 thoughts on “The truth about cannabis and your white matter”