What Is ‘Skunk Weed’? A Beginner’s Guide to Skunk

In English, ‘skunk’ has become slang for any potent, high-THC strain of cannabis. The media often uses ‘skunk’ to define ‘street weed’, usually in a derogatory fashion. In fact, Skunk #1 is the official name of one of the oldest and most popular strains of cannabis, and there is a ‘Skunk family’ of its descendants.

There is a lot of misinformation surrounding the term ‘skunk’. Many cannabis connoisseurs know Skunk #1 as a legendary strain that’s been used to breed countless modern varieties. However, most mainstream media use ‘skunk’ to mean powerful ‘street weed’ (and ‘street weed’ to mean illegal cannabis).

Some media organisations (mostly the tabloid ones who are more interested in clickbait than fact) have even gone so far as to categorize ‘Skunk’ as a particularly dangerous new type of cannabis that’s somehow completely different from both hash, and the ‘street weed’ of the 1960s to 1980s. It’s no wonder that there is confusion around the question ‘What is skunk?’, and trepidation among people who are misled by this type of irresponsible reporting. This beginner’s guide to skunk aims to shed some light on the situation.

What sort of cannabis is skunk?

All members of the skunk family are descended from Skunk #1. This heritage strain is a hybrid of Acapulco Gold, Colombian Gold, and Afghan. Acapulco Gold and Colombian Gold are both sativa landrace varieties hailing from the region around Acapulco in Mexico, and the Santa Marta mountains of Colombia respectively. Afghanistan produces potent, sturdy indica landraces.

Combining these genetics resulted in a new strain that features the uplifting high and citrus flavours of its sativa side, together with the short flowering time, feeling of relaxation and heavy yields that are characteristic of indicas. Sensi Seeds Skunk #1 is easy to grow and recommended for first-time gardeners; it’s also very affordable. 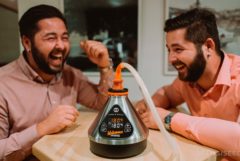 Vaporizer Buying Guide: What to Look For in a Vaporizer

Where did skunk come from?

Far from being a new type of cannabis that has only emerged in the last few years (as is frequently misreported) Skunk #1 was originally bred in the 1970s. Some reports date the original crossing as far back as 1969, in the Bay Area of San Francisco, California. Seeds of Skunk #1 were on sale in the US by 1980.

Although it is possible that some examples made the journey to Europe in the late 1970s, the first confirmed arrival of Skunk #1 in the Netherlands in seed form was in 1982. These genetics have been preserved up to the present day. Skunk #1 is still one of the most reliable and consistent cannabis strains available. It has probably parented more cannabis varieties than any other hybrid.

Why is the word ‘skunk’ used for cannabis?

‘Skunk’ is obviously the name of a North American mammal, and this is inextricably linked to the cannabis slang meaning of the word. One of the defining characteristics of its potent namesake strain is a scent reminiscent of the smelly spray of the skunk. This pungency is more developed in some of the hybrids created from the original, for example Shiva Skunk; many others (such as Sensi Skunk) lean towards the sharp sweet citrus side.

Skunk #1 was so revolutionary for cannabis growers (especially in colder climates) that it’s no surprise that the name ‘skunk’ has become synonymous with strong, seedless, high quality cannabis; think Coca-Cola being launched in 1886, leading to ‘cola’ being a generic term today.

The main confusion surrounding the term comes from the fact that it means two things: it is the name of a famous strain of cannabis, and it is an informal term for strong ‘street weed’.

However, that doesn’t mean that mix-ups don’t happen. When a person uses the word ‘skunk’, they may be talking about the strain of cannabis, a member of the Skunk cannabis family (a Skunk #1 descendant), or any variety of cannabis that is strongly aromatic and potent. 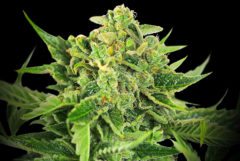 Is skunk more dangerous than cannabis?

This question is frequently debated in popular media, despite it being the equivalent of asking ‘Is red wine more dangerous than alcohol?’ or ‘Are trousers more dangerous than clothes?’. The original source material for these claims was published in 2009 by the British Journal of Psychiatry, and the text clearly associates ‘skunk’ with ‘sinsemilla’ (seedless) cannabis (“78% of the cases group used high-potency cannabis (sinsemilla, ‘skunk’)”).

This confusion of true skunk strains with any seedless, and therefore potent, cannabis continues over a decade after the original mistake. There is a link between cannabis use and mental illnesses such as schizophrenia; people with family histories of, or predisposition to, mental illness should seek medical advice before even considering cannabis use.

Unfortunately this correlation has been reported as causation so often that it is accepted as fact by many people, despite the need for further studies and even some evidence that cannabinoids – in particular, CBD – can actually help people with a range of mental issues such as anxiety and PTSD.

Leaving aside the issue of predisposition for a moment, a more pertinent question is ‘Is strong cannabis more dangerous than weak cannabis?’. This could be compared to asking ‘Is whisky more dangerous than beer?’; if you consume it in the same way, and you don’t enjoy being highly intoxicated, then yes. The comparison obviously falls down on the point that it’s physically impossible to ingest enough cannabis to die from it, whereas alcohol-specific deaths in the UK in 2017 totalled 7,697 people. 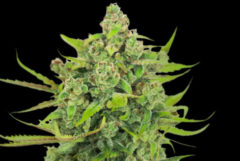 Has cannabis really got stronger?

Having established that Skunk #1 is a cannabis strain with a whole family of related strains, let’s look at the strength and cannabinoid composition of ‘street weed’, as these are the factors that most influence the effects.

It’s important to remember that in the Western world during the 1970s, cannabis breeding was well underway on a commercial scale for the first time. Since then, THC levels in cannabis samples have steadily continued to rise as breeders and cultivators have developed hybrids to increase them.

For many years it was not known that CBD moderates the undesirable effects of THC such as memory loss, paranoia and anxiety (NB: even this study refers to ‘skunk’, although there is no indication that the cannabis in question is actually a skunk strain). Therefore some breeders continually pushed for higher and higher THC to CBD ratios, unaware that they were creating strains that were more likely to be problematic for some users.

Running alongside the development of higher THC cannabis strains came the improvement of indoor grow systems. Better lights, sophisticated fertilizers designed specifically for cannabis, and the sudden accessibility of previously hard-to-find gardening information on the internet, have all contributed to the increasing strength of ‘street weed’ over the last two decades.

As cannabis continued to get stronger, so did the overall subjective experience for cannabis users. Cannabis was a huge target for the media as the War on Drugs continued, and ‘skunk’ became a media term for strong cannabis that caused severe intoxication. Ironically, it’s far more likely that the cannabis in question was not the comparatively mild Skunk #1, but newer strains with a far less evenly balanced THC to CBD ratio.

As mentioned, Skunk #1 was chosen to parent many other skunk strains thanks to its characteristic strength and potency. As one of only a handful of breeders who received the original Skunk #1 genetics that were brought over from the US in 1982, Sensi Seeds has developed many interesting skunk hybrids.

The original Skunk strain is Skunk #1. It has been one of the biggest influences on cannabis genetics since the 1970s. It has the characteristic sweet skunky smell and is well-known for its euphoric, yet relaxed high. It’s a typical hybrid strain, bringing about all the best sides of both indica and sativa.

Super Skunk was bred using Skunk #1 and a potent Afghani hash strain. Super Skunk was awarded a Cannabis Cup award shortly after its release in the 1990s. This strain is extremely pungent, and has thick, dense, resinous buds. Its taste is sweet and its effects are typically physical and relaxing.

Early Skunk is an outdoor strain bred by Sensi Seeds. It’s another proud winner of the Cannabis Cup. Bred from Skunk #1 and Early Pearl, this strain is an easy-to-grow indica-dominant hybrid. It’s favoured for its short flowering period and its enormous harvests. For users, it offers a euphoric, relaxed, and happy high with tendencies towards creativity and focused attention.

Sensi Skunk is a special variety of Skunk in that it has a citrus flavour rather than the typical pungent, earthy aroma. It’s heavily indica-dominant, producing the kind of relaxed, calming effect that comes with many indica varieties. Its soporific effects are reported by users to be good for stress relief, sleep, and muscle relaxation.

Given how many strains Skunk #1 has parented, it can safely be assumed that skunk genetics will go on to play a big role in strains of the future. It is one of the most stable strains available, with genetics that have influenced countless cannabis varieties of the present day.

The confusion surrounding the word ‘skunk’ is simply semantic, and could be cleared up with more commonly-known information about the breeding history of the Skunk #1 strain, and less use as a general nickname for any potent, seedless cannabis.

12 thoughts on “What Is ‘Skunk Weed’? A Beginner’s Guide to Skunk”