Sanjay Gupta is a neurosurgeon and television journalist notorious for discussing the benefits of cannabis on a major US TV network. Despite the fact that he started out his career in staunch opposition of cannabis legalisation, he is now an advocate of accessible medicinal cannabis. His bravery and eloquent articulation have made him an icon in the cannabis community.

A child of Indian immigrants, Dr. Gupta studied in the University of Michigan, gaining his MD in 1993. He is an Emory Healthcare general neurosurgeon at Grady Memorial Hospital and has worked on spine trauma and 3‑D‑image-guided operations. His career as a journalist for CNN led to his embedding with the 1st Marine Expeditionary Force in Iraq during 2003.

His high-profile careers in medicine and journalism led to considerable fame and influence. He turned down the position of US Surgeon General in the Obama White House in 2009. He is one of the most famous neurosurgeons on the planet.

From pot hater to pot advocate

Back in 2009, neurosurgeon and chief medical reporter for CNN, Dr. Sanjay Gupta, wrote an article for Time magazine entitled ‘Health: Why I Would Vote No On Pot’. He is to be lauded for the fact that he has since done considerably more research. Admittedly, it would have been better to do this before the world’s highest circulating magazine printed his opinion. In August 2013, he issued a full apology for his contribution to the misinformation that plagues the cause of medical cannabis.

As a way to re-educate the misinformed, Dr. Sanjay Gupta began a documentary on the subject of cannabis called ‘Weed’. It was released in three parts in 2013. In this documentary, he talks about the public opinion of cannabis and the medical reasons why he advocates for its legalisation. Despite starting his life in an anti-legalisation position, he has become one of the world’s most celebrated cannabis advocates.

Inspiration for medical practitioners to come forward about cannabis

The first documentary seems to be acting as a quiet rallying call for medical practitioners who have been too wary of repercussions or too isolated in their knowledge to risk speaking out in favour of medicinal cannabis. Dr. Gupta wrote in a CNN article that, as ‘Weed’ started to circulate,

…many doctors and scientists, worried about being ostracized for even discussing the potential of marijuana, called me confidentially to share their own stories of the drug and the benefit it has provided to their patients.”

He also mentions his concern that in the US, a person dies every 19 minutes from an overdose of prescription drugs. The vast majority of these overdoses are accidental. In the time it took to write this article, two people died. It isn’t necessary to be a neurosurgeon to put the facts together.

Hopefully, the documentary will continue the progress that Dr. Gupta is both making and enabling. This is a man who not only changed his highly public stance on cannabis, but had the bravery and integrity to admit it to the world.

Dr. Gupta has even raised issues of US government patents related to cannabinoids that date back to 1942. While few have been in a position to publicize these patents, Gupta has had no problem discussing them with CNN. He has even criticized the FDA for their lack of response towards the issue.

Gupta stands up for scientific evidence – not political heresay

In the 2013 “apology” article Gupta published on CNN he references a long-forgotten piece of US history. In 1970, the Assistant Secretary of Health, Dr. Roger O. Egeberg wrote, “Since there is still a considerable void in our knowledge of the plant and effects of the active drug contained in it, our recommendation is that marijuana be retained within schedule 1 at least until the completion of certain studies now underway to resolve the issue.”

As Dr. Gupta points out, the classification of cannabis as a drug with “a high potential for abuse” and “no medical application” – both of which are legal requirements for a substance to receive a Schedule 1 rating – has been made because of the absence of scientific evidence.

Almost half a century later, every attempt to reschedule cannabis in the US has been quashed. It is alarming considering that there is more hard evidence of the benefits and applications of cannabis than there has ever been. 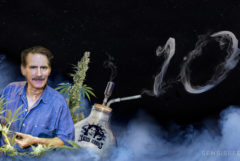 In January 2011, Dr. Sanjay Gupta was named “one of the 10 most influential celebrities” by Forbes magazine.

His inspiring reversal of opinion has impressed many, and has even inspired the creation of a medicinal strain called Gupta Kush.

Dr. Gupta has admitted in interviews that he tried cannabis in order to experience its effects for himself.

“We have been terribly and systematically misled for nearly 70 years in the United States [about cannabis], and I apologize for my own role in that.

…I apologize because I didn’t look hard enough, until now. I didn’t look far enough. I didn’t review papers from smaller labs in other countries doing some remarkable research, and I was too dismissive of the loud chorus of legitimate patients whose symptoms improved on cannabis.

…I mistakenly believed the Drug Enforcement Agency listed marijuana as a schedule 1 substance because of sound scientific proof. Surely, they must have quality reasoning as to why marijuana is in the category of the most dangerous drugs that have ‘no accepted medicinal use and a high potential for abuse.’

They didn’t have the science to support that claim, and I now know that when it comes to marijuana neither of those things are true. It doesn’t have a high potential for abuse, and there are very legitimate medical applications.” While Gupta will likely receive some negative criticism for his public opinions about cannabis, he has also received unexpected support from his peers. Thanks to his medical credentials and social status, Gupta is someone that people are willing to listen to. With his articles, his voice and his documentaries, Gupta has the opportunity to change the lives of many. After all, nobody preaches like a convert.