Known as the godparents of Californian cannabis legalisation, Mikki Norris and Chris Conrad have campaigned tirelessly for over thirty years to advance the cause of cannabis and hemp, not only in the United States but throughout the world. Cannabis News Network presents a new video series celebrating the couple and their work.

Mikki Norris and her husband, Chris Conrad have played a vital role in the cannabis legalization movement in the USA. It is Sensi Seeds’ pleasure to present to you this 6-part exclusive interview about the couple’s journey together, both with the cannabis plant and its political re-entry into modern society. In the interview, the couple explore their story of activism, the fight for medicinal and recreational cannabis and their ideas on the future of cannabis legislation.

Mikki Norris and her husband Chris Conrad have been cannabis campaigners since the late 80s, and they have a diverse and fascinating history both together and with the plant. Their achievements include co-writing the books ‘Shattered Lives: Portraits from America’s Drug War’, and ‘Human Rights and the US Drug War’. Together, they have successfully led campaigns for law reform for both medicinal and recreational cannabis. The couple moved to Amsterdam in 1995 (which you’ll discover in this first interview) where they spent half a year as curators of the Hash Marihuana & Hemp Museum.

Their first experiences in Amsterdam were so positive that they regard this period as ‘The Golden Years’, and it is a pleasure to watch Chris Conrad and Mikki Norris smiling and reminiscing in an apartment above the very museum that they were such an instrumental part of setting up.

It was activism that brought Chris Conrad and Mikki Norris together. They met at an anti-Regan protest in 1981. As ‘coalition activists’, they worked with many different groups: environmental, anti-nuclear, rent control, the peace movement and so on. Around the same time, Chris was discussing with his niece what her school was teaching her about cannabis (mainly that it was very bad!). Wanting to provide her with better, truthful information, he began researching the plant, and discovered its past uses and the immense potential of industrial hemp. 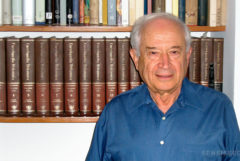 The cannabis causes that the couple were passionate about came together seamlessly. It was an obvious yet powerful choice to devote their energies to campaigning for cannabis legalisation, and to explore how many different forms of activism they could incorporate into their new quest. As Chris says, “…all these different things that I’d been fighting for all came into one package.” And to quote Mikki: “Civil rights, social rights, human rights, justice as well.”

Despite the many things that bring activists together, the reality is that there is not always a consensus on all aspects of their cause. It happens often that activists in a team are not necessarily aligned in their goals and the methods that should be used to achieve them. A deeper look into every campaign usually reveals some disagreement. This is not necessarily a bad thing; it encourages debate and creative solutions.

In this third part of our 6-part interview, Chris Conrad and Mikki Norris talk about their friendship and working relationship with one of the most well-known cannabis crusaders of all time: Jack Herer.

Jack was the author of one of the most famous books about hemp and cannabis ever written, ‘The Emperor Wears No Clothes’. In the early days of campaigning to legalise cannabis, Mikki, Chris and Jack worked together. But as the medicinal cannabis movement gathered momentum, it seemed that the campaign to legalise recreational cannabis was being left behind.

In the United States of the early 1990s, the push to legalise medicinal cannabis was gathering pace and looked likely to succeed. At the same time, a divergence was growing in the campaign movement. Everyone agreed that sick people needed safe, legal access to medicine.

When it came to recreational use, however, opinions differed. As Chris Conrad says, “… between people that said: hell, I’m no patient, I want to get high, and other people that said let’s just start here, get a foot in the door and the rest will follow”.

The interview continues in the fourth part of this series. In this episode, Mikki Norris and Chris Conrad give viewers an insight into their experiences with different campaign tactics. They share their interpretation of the parallels between the Dutch legal standpoint and the situation in the USA.

California has been the epicentre of United States cannabis reform since the days of Proposition 215. Over two decades later, Proposition 64 has raised the bar again for the sensible regulation and sales of cannabis. As Chris Conrad says in this video, “In some places, if you have an arrest record for marijuana, they call that a criminal record, but in California, it’s a resumé.”

For Mikki Norris and Chris Conrad, this is a victory that has been a long time coming. They began campaigning in 1988 and spearheaded the campaign for Proposition 64, known as the ‘Adult Use of Marijuana Act’. It was successfully passed in November 2016. By January 1st 2018, licenses had to be issued to dispensaries and by now, the knock-on effects of the new legislation are definitely being felt.

One of the most significant changes is the opportunity for fresh starts for people who had convictions for cannabis possession or supply. Another is the slow and long overdue addressing of the disproportionate number of convictions given to people of colour, and the enormously negative impact of white people deliberately seeking out black communities in order to buy cannabis.

In this video, the fifth of the Cannabis News Network series on Mikki Norris and Chris Conrad, they compare the situation in Amsterdam to that in California and discuss the age limit, tax situation and other ramifications of the current legal model in both places.

In the area of cannabis, as in many other areas, Donald Trump has made vague and often contradictory statements both before and after his surprise presidential victory. As Mikki says at the beginning of this video; on the campaign trail he said that cannabis should be a “state by state” issue, implying that individual states would be able to decide their own cannabis policies. Once in power, however, he appointed Jeff Sessions as Attorney General; some of his first acts were to overturn policies put in place by Barak Obama to protect cannabis policies fairly decided by individual states.

Chris adds to this: although Sessions claims that “good people don’t smoke marijuana” and that he is strongly against it, it’s likely that Sessions will work out a way to continue turning a profit for his and Trump’s “friends”.

It was surprising to learn that small scale cannabis growers who have established a consistent customer base voted against legalisation. Mikki believes that they are reluctant to take on the regulations and rules that come with legal but controlled cultivation. However – as she goes on to explain – those regulations have already been decided on and put in place.

We hope that you have enjoyed watching this honest discussion with Mikki Norris and Chris Conrad. Their journey is a unique one, and in this interview the couple earnestly share their highs and lows of cannabis activism. What would you ask them if you had the chance? Let us know in the comments!