As gripping as a novel, as colourful as a Bollywood movie and as philosophical as the Bhagavad Gita – Mila’s autobiography “How I Became the Hash Queen” is one of those books that makes you look at your own life with fresh eyes. It is a homage to freedom, a love letter to nature and a kick in the butt to all the whingers.

“We were all looking for paradise. Here. Now.” Here and now was on 5 December 1968 in India. Mila found paradise. It was her 24th birthday.

Together with her baby daughter Miloes and three travel companions, she was walking on the beach in Goa. They had been travelling for exactly 102 days. Mainly in a camper van, but also by boat, bus and train, on foot, horseback, bike and rafts and once even on cables.

They were travelling from Amsterdam to Calangute. Mila was tired. But happy. A feeling shared by readers of her autobiography “How I Became the Hash Queen“. In the first 100 pages, one event follows the next at a breathtaking pace. Can we take a break? Not a chance. You are totally drawn into Mila’s world and rattle around like cannabis in a Pollinator®.

Mila owes her nickname to the Pollinator®, the amazing yet simple method for separating trichomes from plant material. The “Hash Queen” changed the cannabis industry forever.

Mila as a female cannabis icon

It is thanks to her invention alone that we can now, at no great effort or expense, produce high-quality hashish. High Times gave her a “Lifetime Achievement Award” for her work. All cannabis lovers thank her with respect and admiration. No Cannabis Cup or event takes place without Mila as a jury member, speaker or guest of honour.

Mila is one of the few female icons in this industry, which is still male dominated. Obviously, cannabis plays a leading role in her book. There is plenty of smoking, over the decades and all around the world.

She prefers to smoke cannabis “old school” in a home-rolled joint; Mila is no fan of vaporizers or consumption methods like dabbing. Despite her great love of cannabis, it would be shortsighted to reduce her book to this topic alone.

Mila’s story is the tale of a mother, a businesswoman and a pioneer. It is about love, freedom and the fundamental questions of life: Who am I? Where do I belong? What happens after death?

Mila smoked her first joint relatively late in life. She was already 20 years old and the mother of a daughter. It is not cannabis that is the theme of her life, but being on the move and being able to keep on moving. 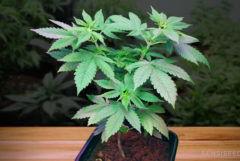 How to Keep a Mother Plant Healthy

It all began in Liverpool

Mila was literally a traveller while still in the cradle. As the daughter of a Shell engineer, she grew up in the United Kingdom, in Indonesia and in the Netherlands. She had a happy childhood, until her mother suffered a stroke which confined her to a wheelchair.

After Mila became pregnant at a young age, she ended up in a home for single mothers. The scenes she describes there are heart-rending. Young women treated like cattle and bullied into giving up their children for adoption. Mila managed to escape, with her child.

She moved into a small room in the centre of Amsterdam and worked as a seamstress for a fashion studio. There she met Henk Koster, with whom she soon afterwards opened her own studio. Kink 22 became a big hit and suddenly Mila was one of the young avant garde group on the Dutch fashion scene. She was jetting between Amsterdam and London, partying and taking LSD.

Kink 22 became the victim of its own success and Henk decided to try his luck in the Italian film industry. Kink 22 changed to Cleo de Merode, for many people the first real coffee shop in the Netherlands. However, that is definitely inaccurate, because although drugs were tolerated and shared, they were never sold there.

Cleo de Merode became the reference point at the centre of the explosively expanding universe of the music, fashion and art scene. For the police, Mila’s cafe was a thorn in their side. Complaints from neighbours about noise and indecent behaviour kept piling up. When social services threatened to remove her daughter, she moved fast.

With Miloes holding her hand, and 600 US dollars in her pocket, Mila travelled overland to India.

“The world was our home and we were ready to explore it.”

The second part of the book takes place almost entirely in Asia. As a reader, you wonder whether the author can possibly continue at such breakneck speed. She does not, which is a good thing. Mila becomes more reflective.

She allows herself to pause now and again. Sometimes it was the only option:

“We had no money. It felt to us like total freedom. So many of our plans and thoughts are tied up in material things, but if we don’t have them, there is no point in thinking about where we want to travel, what book we want to read, what clothes we are going to wear and what we would like to eat for supper. The only thing you can do is let go and trust.”

In India, Mila learned to trust the flow of life. She saw that the Western way of always wanting to improve things led to frustration and dissatisfaction. Alongside Miloes, Mila became the mother of Merl, Lali and Chimed. Their fathers only remained briefly with the family. Neither of them helped provide any support.

Mila always managed somehow. She sent hashish to Europe in hollowed-out books. In Delhi she bought blouses decorated with beads and sequins that she could sell for good money in Los Angeles and New York.

Long before the advent of “Fair Trade” and “Organic” labelling, Mila created a cooperative in the Himalayas of around 60 seamstresses to knit chunky woollen pullovers for her – at the time a total fashion “must-have”. Mila is a gifted entrepreneur. She has a nose for fashion trends, a feel for branding and the ability to network with the right people.

If you are beginning to get the impression that the author is describing herself in her autobiography as a superwoman who excels at everything she does, I can assure you that is not the case.

When asked what advice she would give to other people starting up businesses, she answers simply: “Do it. Just do It. It is not as frightening as it seems.” Not everything that Mila touched turned to gold and like all of us, now and again she did something just plain stupid.

Once she was caught in Frankfurt with a suitcase full of hashish. She was lucky to get away without a significant sentence. It is scenes like this that allow you to understand Mila and which give her story the necessary depth. 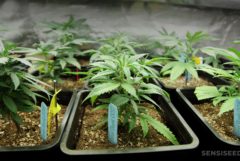 Hash Queen goes Back to Amsterdam

After nearly 20 years on the Indian subcontinent Mila returned with her youngest son, Chimed, to Europe, where Miloes and her boyfriend were living. The other two children remained at their boarding school in Mussoorie.

Once more, the single mother faced the question: How am I going to feed my family? Amsterdam at that time was the Mecca of cannabis lovers. New cannabis varieties were regularly coming onto the market. In 1988, High Times organised the first Cannabis Cup. Coffeeshops created a huge demand for high-quality product.

After Mila met up with a few old acquaintances from Goa, they all decided to get involved in the growers’ scene. It was a man’s world, but that gave her an advantage. For years, Mila managed to stay below the radar of the authorities. She earned enough to pay for her children’s education. But: payments were irregular, the work was stressful.

How the Pollinator® was invented

One evening, after a long day of work, Mila was standing exhausted in front of her tumble dryer. “Suddenly I realised that the clothes were being thrown around in the dryer in the same way that I was shaking the cannabis leaves back and forth over a sieve.”

The idea for the Pollinator® had been sown. After a bit of experimentation and trial and error, the first few machines were ready for sale. Initially, customers were hesitant. They found that the mechanically produced hashish was too strong.

Mila was ahead of her time, and all the hype about THC-rich cannabis varieties and ultra-potent concentrates like shatter and wax was still a long way off in the future. Over the years, and with two follow-on products (Ice-o-lator® and Bubbleator®), she became successful. Mila is now financially secure. Is it time to put her feet up? By no means!

Mila opened a hotel totally dedicated to cannabis. She returned to India and discovered that everything had changed. Manali had gone downhill and turned into a backpacker ghetto, where the once proud nomad families now pose for tourist photos. The Himalayas stand there, unaffected by all the hubbub.

Working with her sister and a small team, Mila made a documentary. Mila’s Journey offers some fascinating insights into a culture caught between tradition and modernity. Stretching from Dharamshala in the west to Srinagar in the east, there is a mighty mountain panorama. Here, high up above the roof of the world, is where her children will scatter her ashes one day.

What next for Mila Jansen?

The “Hash Queen” has no plans to die for a long while yet. I met Mila, who is now 74, in the Botanic Gardens in Amsterdam. It was one of those sizzling hot summer days, when the air is hazy with heat.

Mila didn’t have a single a drop of sweat on her brow. Whenever she laughs – and Mila laughs a lot – she has dimples in her cheeks. She gave me a cheeky grin and told me about her upcoming travels.