Top 5 hacks for when you run out of smoking papers

Every dedicated cannabis user ought to be carrying around a kit of essential items at all times. Omitting this crucial aspect of the stoner routine is just unprofessional. But even the best of us get caught out at times, and go to roll a joint only to discover there are no smoking papers to be found. You may find yourself asking: what can I use as rolling paper?

1. Find a substitute for paper

We all remember schooldays when someone managed to smuggle in an eighth but—surprise surprise!—didn’t manage to steal any smoking papers from out of their big brother’s stash box.

And then eventually you all end up huddled behind the sports hall frantically trying to roll joints out of toilet paper, magazine covers and old receipts, and you’ve wasted most of the weed so far trying to do it…

So thank heaven that those days are long behind (most of) us, and we now have an array of superior options to go for, in the astoundingly rare event that we plan poorly enough to run out of OCB’s and there’s nary a head shop to be found.

If you happen to be artistically-minded, or just the type of person that likes to do brass rubbings when out and about, you may be the kind of person who carries around tracing paper in their pocket!

Tracing paper is actually a pretty good alternative for smoking papers, if you have the thin, high-quality stuff. Much better than a magazine or a receipt, anyway—but yeah, perhaps not the most common pocket item.

On the other hand, if you’re just a regular, uncreative Joe with no tracing paper about your person (you poor peasant), you may still be in luck if you happen to have a few sticks of gum in your pocket. That silvery foil stuff that your sticks of gum come wrapped in?

If you can rub the foil part off without damaging the paper underneath, that paper can act as a pretty reasonable substitute Rizla—and as a bonus, all the sugary-gummy residual goodness left on the paper should help stick it together, with a little help from your tongue.

Although this technically counts as a replacement rolling paper, it’s so good it deserves a section of its own. The outer layers of an ear of sweetcorn can be dried and used as a natural rolling paper, and probably represents the least harmful option listed so far!

The husk is naturally soft, flexible and fibrous, and retains these qualities even when dry.

Many countries that produce both corn and cannabis use corn husks to roll joints as a traditional method of consumption. In Jamaica, an island that is globally known for its high-quality cannabis, sun-drying corn husks to later use as rolling papers is a widespread practice.

Here they are typically soaked in water briefly prior to rolling, to ensure that their flexibility is maximised.

Mexico and the USA are other countries where cannabis users report use of this method—in the USA, pre-dried corn husks can be purchased in the Mexican section of many large supermarkets, particularly in the South.

As well as corn, fibres from several other plants can substitute for rolling papers—and may even prove preferable in terms of flavour, as many report the ‘papery’ taste to be absent. The fibrous inner membrane of bamboo is one substitute, and the bark (or the layer beneath the bark) of several trees is light and flexible enough to be used.

Making substitute pipes is another approach to the problem of being caught out without smoking papers or bong. There are various different ways to achieve this, from using an apple or a bell pepper to constructing ambitious devices out of old electronics and scrap metal.

Here we’ll briefly describe two related methods that are capable of packing a serious punch, but do not require any hard-to-find items.

Both techniques require a 2-litre (or similar) empty bottle, such as one used to contain water or soft drinks. The bottle must be cut in two, approximately 1/3 of the way up from the bottom. A piece of tin foil shaped to fit the mouth of the bottle and pierced several times to allow airflow is also needed.

To make a lung, simply use tape to attach a plastic bag to the cut end of the bottle; once secure, scrunch the bag up inside the bottle. 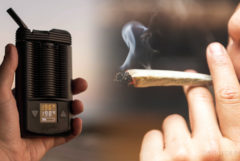 “Hot-knives” is one of the oldest and most well-known methods of consuming cannabis in the absence of a paper or pipe. It is also one of the simplest—but can potentially be quite dangerous, so great care must be taken especially if already intoxicated! All you need is a heat source such as a gas or electric stove, two knives and some cannabis.

Some also prefer to use a straw or a rolled-up piece of paper to inhale the smoke, to avoid getting too close to the source of the heat, but this is not always necessary.

A permanent solution for the forgetful cannabis users is to find a different way of using. If you never want the problem of getting caught without smoking papers again, have a look at the pocket sized vaporizers that are out there.