30 years of Sensi Seeds – An interview with Gio Dronkers

Hi Gio, thank you for taking some time out of your busy schedule! First off, can you remember your first cannabis high? What was your experience like?

The first time I got high… I was around sixteen. I had, well, let’s say borrowed, a small piece of hash from my dad, and a friend and I rolled our first joint. We had a lot of fun, we laughed our asses off for quite some time!

And it was funny, because the weekend after – it was during the weekends that I went to my dad’s place for dinner, and to stay over – during dinner he just asked me, outright, “Did you smoke already?”, you know, and I was like “Yeah, just.” And he said “Did you like it?”, and I said “Yeah, we had a good time”, and we just carried on.

It was just fun with friends. It was one friend in the beginning, then more friends joined in the fun, and then it was regular. Almost every week we would go out, and first we’d come together and smoke a joint, and enjoy it, you know. It was a very social activity.

What were you busy with before joining in the family company?

Before I joined Sensi I was studying medicine. I wanted to do something in research but I had no clue yet, I was just starting. It took me a while to get into university because of the lottery system; I was not lucky enough to get in straight away. So one year I decided to go to Antwerp and study medicine there, which was a mistake because their learning system is really different. It was basically a repeat of what I had to do during the last year of the course to be able to go to university! So for 90% it was that, and the other 10% had something to do with medicine but it was very boring, drawing skeleton bones and stuff like that. It wasn’t really engaging. Then when I came to Rotterdam, the first month of the course, you get a knife and a corpse and there you go, you know! Different stuff. It was a lot more exciting, a hands-on approach to study.

You could say that I’m science-minded, I like to figure out how stuff works, or if I can do it myself, learn about it. That’s always been important to me. I’m not a breeder from origin, I was the guy on the computer and building the first website, and stuff like this. Working with the systems, the computers and printers and fax machines and alarm systems and all this stuff, this was kind of what I used to do from when I was small, basically. So when the company started and these things came up, I was the one going ‘why don’t you try it like this?’ and fixing a lot of them.

When did you actually decide to join the Sensi Seeds team?

The process of me coming to work at Sensi was pretty organic; it more or less just happened naturally. It was also part of the development of the company somehow. First there was Alan, then Alan went more into the breeding side of things; then Ravi, then finally Jeroen [Sensi Seeds’ General Manager] and then I came in, in 2004. When at a certain point Alan decided to change what he was doing, and Ravi too, it became something that Ben suggested to me. But it wasn’t planned ahead.

And are you working on bringing out new strains in the near future?

As far as new strains go in the next few years, we might be making some announcements, but all of that news is staying under wraps for the moment. We’re trying new things. With everything that is out there, it’s hard to create something that is totally new and exciting. We’re all so spoilt, you know! But we’re working on it.

The latest strains we brought out, the Sensi Seeds Automatic collection, are very exciting in their own right as autoflowering versions of some of our classics. We looked at which of our seed strains were enduringly popular and started with those, so that more people than ever before would be able to grow our genetics.

What are your favourite strains?

My personal favourites are difficult to pin down because we have so many really great, really enjoyable strains. However… I smoke Jack Herer every day. I like the Northern Lights, and the NL#5 x Haze. I like some Jack in the morning and some Haze in the evening.

What are your thoughts on the current status of cannabis legalization globally?

Difficult question. Uruguay is very nice, but also they are in the very, very early stages of what they are doing. They have adopted the 15% [THC] rule, which actually isn’t a rule anywhere; it’s more of a caprice of the Dutch Ministry of Justice. However, this limit on how much THC weed can legally contain has become part of the Uruguayan regulation, so this is what they have to provide. It concerns me that the chances of success of the whole scheme are lessened if the free market is not given an opportunity to participate.

The thing is, everyone is saying they legalized in Uruguay, but actually they didn’t. And this is a little bit of the problem, it’s false advertisement. It has become a lot freer than it was. There’s now an organization that offers the opportunity to get the genetics and distribute them to people who are registered. There are maybe some social club plans, and licensed growers, but they will offer limited genetics. The idea is that they want to have genetics that are only available in Uruguay, and not show up in the neighbouring countries.  So they have a limit.

So on the one hand, Uruguay’s great; on the other hand… If you only care about what your neighbouring countries think about what you’re doing, instead of just looking at how you can get the people what they want, what they actually ask for; instead of trying to push something down their throats… then this is what you’re going to get. And as long as the rest of the cannabis business is still illegal, then the same system they’re hunting is still there, it still applies.

In the end, it’s the people who smoke who determine where they buy their weed. So will they buy it from the Government, where they have a limited choice and the THC level is restricted? Or will they still try to buy it from their local dealer, where they have always bought it even though it was illegal? Is it going to be enough of a change to have the effect they want? So we’ll see. If the Uruguayan government manage to provide really good quality cannabis, that might tip the balance. That’s really what they should try to do.

I’m not saying that I expected it, and it is definitely a step in the right direction! But they are making it so difficult to be successful. We’ll see what happens.

What about the USA?

It’s a similar situation with the United States. It’s great, but I’m quite cautious about celebrating too early, you know. I think it is still a bit too early, and a bit too easy, to say “oh hallelujah, we have medicinal cannabis and they’re never going to change it back and it’s going to be legal, just you wait…” and I’m still not that convinced, you know. It would be nice to be wrong, but I still see a way back for them very easily. Legally, nothing has really changed; cannabis is still on List 1 [listed under the Controlled Substances Act as a Schedule 1 drug – Ed.].

There’s hope, of course. There always has been, for all these years. But since I can remember, there have been times that we, that everybody, was celebratory – ‘wow, now it’s really going to happen’ – and then a week later or a month later, there are setbacks, or the change doesn’t come, and we just have to carry on. Be pragmatic, without giving up hope, and carry on.

And if it’s going to change, the United States are going to have to be the ones to lead the change. Because they have been the ones that have been leading the oppression, all over the world. Forcing their views on all of the countries. So as long as they don’t change… it’s got to come from the top down. Clear federal change in the States; that would really mean something.

How do you see the future of the company as a whole?

Obviously, in such a dynamic and rapidly-changing world industry, it’s very hard to say where we are going to be in five years, but we’re very positive. We hope that the new agricultural and processing facility we are establishing in Romania is a great success; we had a good harvest last year, so it’s going really well so far. With the resurgence of interest in industrial hemp, we anticipate that HempFlax will be flourishing more than ever before by then.  The museum in Spain is listed on TripAdvisor as one of the top ten museum attractions in Barcelona; we hope in five years’ time it will be number one. We hope the museum in Amsterdam will be even more of a success during the next ten years as it has in the previous twenty. And we hope that Sensi Seeds will be even bigger than it is now. The first hemp and cannabis multi-national! And the beauty of it is, since we keep going back to the plant, we’re never going to run out of inspiration. There’s so much to do!

Something else that I find inspiring is the Sensi team. I’m very proud of the amount of people who are working in the company now, just how much the company has grown. I’m not claiming that it’s all my success or anything, but I’m proud to be part of the success. The company is part of my life, you know, not just a job. So it’s really nice to be successful with the whole team; I’m proud of the whole team! 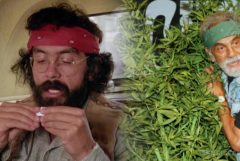 Thanks for your for taking some time to talk to us Gio!

We hope you’ve appreciated our first series of interviews with part of the family behind Sensi Seeds. Their story is proof that with dedication, passion and perseverance, it is possible to make a real difference and help move things forwards!

If you have missed out on one of our previous interviews, you’ll find the links to them below: