Cannabis in Tanzania – Laws, Use, and History

Tanzania is one of the largest producers of cannabis in the world. Its dense forests make illegal cultivation easy. Despite this, the country’s authorities are on a mission to address this, with an extensive eradication programme in place. The sheer number of cannabis seizures suggests it’s a fight they may struggle to win.

Can you possess and use cannabis in Tanzania?

It’s illegal to possess or use cannabis in Tanzania, under the Drug Control and Enforcement Act, 2015. If caught, it’s likely you’ll be given a prison sentence – up to one to five years for small amounts, or a hefty fine.

Even if the individual is caught with only a small quantity, they run the risk of being given a fine of 500.000 shillings, a prison sentence of up to three years, or both. A “small quantity” is listed as 50 grams of cannabis or 5 grams of hash, which is relatively large compared with what’s considered a small quantity in other countries.

As for usage? The law defines this as any act of smoking, inhaling, sniffing or otherwise using cannabis. It also applies to being caught with smoking paraphernalia. The offender can be sentenced to three years in prison, a fine of 1 million shillings, or both.

As such, users should be wary. In a bid to address the growing ‘cannabis problem’, undercover policemen often pose as dealers to catch offenders. If you’re caught, you can expect to have to pay a bribe (as much as $300) to avoid being arrested and imprisoned.

Can you sell cannabis in Tanzania?

It’s illegal to sell or supply cannabis in Tanzania. If you’re caught supplying it, you could be subject to a long prison sentence.

Since 2012, lawmakers have been campaigning to make the penalties more severe, with life sentences in place for serious drugs offences.

As it stands, cannabis trafficking is a big issue in Tanzania. Several major drug-smuggling routes pass through it, and the country is itself one of the largest cannabis producers in the world.

In a bid to curb the illegal cannabis trade, authorities commenced a large-scale eradication programme. In 2018, they destroyed 14 hectares of the crop in Arusha (a northern province and key growing area).

Timotheo Mzava, Arumeru administrative secretary, commented: “Some local officials are themselves complicit (in the trade) and we cannot accept that.” He also added: “We are going to arrest all persons implicated and nationalize all vehicles found to be carrying even the smallest quantity of cannabis.”

Preventing cannabis traffickers from cultivating the plant will be difficult, though. Many of the illegal plantations are well hidden within Tanzania’s natural forests. Tanzania’s borders are porous, making it hard for authorities to control the flow of narcotics, and they have a large coastline, which is mostly unmonitored.

Can you grow cannabis in Tanzania?

Despite the fact that the laws are strict, the country is one of the world’s largest cannabis producers. It’s cultivated in half the regions of the country (especially those located near to international borders), and police estimate that half of the families in these regions are involved in farming it.

This is largely because it’s much more lucrative to grow than other crops. According to Prohibition Partners, small farms cultivating plants like maize and sugarcane typically made $25 to $30 per acre in a season. By contrast, a single harvest of cannabis could yield as much as $200 a year.

The regions where cannabis farming is most common are: Morogoro, Arusha, Tanga, Mara, Kagera and Ruvuma.

Though cannabis cultivation is prevalent, the government show no signs of softening their approach towards it. In August 2020, they pledged to work with law enforcers to eradicate cannabis farming, with the leader of the Tanzania Forest Service Agency commenting: “Cannabis is a drug that poses health risk to users and cultivating the drug in our forests is illegal.”

Is CBD legal in Tanzania?

CBD, despite having low levels of THC (the substance responsible for the ‘high’) is not differentiated from cannabis in Tanzanian law. As such, it’s not legal to purchase or sell it in the country.

Can cannabis seeds be sent to Tanzania?

Cannabis cultivation is illegal in Tanzania. The law is strict regarding the possession or sale of seeds, with offenders running the risk of being given a thirty-year prison sentence if caught.

Therefore, the sale or purchasing of seeds is forbidden, and you may not send them into the country via the mail.

There is currently no medicinal cannabis programme in Tanzania, though cannabis is used (illegally) for medicinal benefit in rural areas of the country.

This zero-tolerance policy may be reviewed in the future. At the meeting of Heads of National Drug Law Enforcement Agencies, Africa in 2016, the Tanzanian government was advised to “develop national strategies to address increasing access of controlled drugs for medical and scientific purposes.”

The government responded by highlighting that they were the first country in Sub-Saharan Africa to introduce methadone-assisted therapy to treat opioid addiction. They’ve also since trained 3,000 healthcare providers to boost access to controlled substances for medical conditions. This suggests that the government may be open to introducing a cannabis medicinal programme in the future.

It isn’t legal to grow industrial hemp in Tanzania. However, the Tanzanian people have been using cannabis and hemp for practical purposes for centuries, and it’s believed that it is still used widely, especially in the rural communities.

If you are travelling to Tanzania (or currently live there), you may be interested to know the following:

It’s thought that cannabis was first introduced in Africa via the Swahili coast thousands of years ago; perhaps by Hindi, Farsi or Arabic traders. Not much is known about these early days, but it’s thought that the people of Tanzania may have consumed cannabis, and used it for practical purposes too.

In the 1600s, European travellers observed that East African people smoked it using coconut-based water pipes (Comoros) and antler-based pipes in Madagascar. A Portuguese account from the 1580s reports the use of ‘bangue’ in the area, which is believed to relate to the local term for cannabis – bhang. After this, there is no written evidence until the 1790s, detailing that East Africans used it for practical purposes as well as for smoking.

Tanzanian people also used it to supress their appetite, so they wouldn’t feel hungry while working. In 1883, it was recorded that the people of southern Tanzania said it “calmed the sufferings of hunger”.

A wave of ‘modern’ cannabis use began after World War II. Returning soldiers, who had been stationed in countries all over the world, brought the new customs they’d learned with them. These modern habits continued through to the 21st century.

Cannabis has been a part of Tanzanian life for centuries, and it’s widely used across the country, particularly in rural communities. In the Southern Highlands, the seeds and leaves are used in cookery, and traditional healers have been known to treat ear-ache and other ailments with it.

Nowadays, attitudes to cannabis vary in Tanzania. A survey found that most cannabis-users were introduced to it via friends or family, usually in early adolescence. The most common reasons for trying it were curiosity, social acceptance and enjoyment. However, some frown upon the practice, and heavy use or addiction is relatively uncommon.

Tanzania’s cannabis strains are well known for being potent and providing a psychoactive effect. This reputation means that the country has long been a popular destination for cannabis tourists, particularly from Malawi.

Malawi Gold is the most famous strain in East Africa. Over the years, it has become the predominant cannabis plant of Tanzania. Tanzanian Magic is another commercial strain, and is a 100% sativa that is native to the country’s Southern Highlands.

Most sativas are tall and straight, with thin, dark-green leaves. Some of the varieties require long vegetative growth periods before flowering, due to the slightness of the temperature variations this close to the equator. Some landraces need as much as 20 weeks of vegetative growth before they flower.

As for the aroma? Most East African sativas are described as smelling spicy, sharp and pine-scented.

Cannabis in Angola– Laws, Use, and History

Where does the cannabis grow?

Cannabis grows abundantly across Tanzania. It’s mostly cultivated in regions like Morogoro, Tabora, Iringa, Mara, Rukwa, Arusha, Rumuva, and Tanga. Increased demand in Mozambique resulted in a rise in cultivation in other areas like Mtwara and Lindi.

Has Tanzania really got a cannabis problem?

The US Department of State identifies Tanzania as a ‘significant transit country for drugs’, with a ‘growing domestic user population’. It also states that there are several drug trafficking organisations in the country, and that the country produces large amounts of cannabis for domestic consumption and international trade.

It’s not surprising that the Tanzanian government is losing the ‘war on drugs’. The 854 miles of coast make it easy for cannabis and other drugs to be smuggled via the sea, and air couriers also distribute illegal substances via the airports.

Many international drugs routes pass through the country. For example, a route running from Brazil (via Ethiopia) to Tanzania was uncovered in 2010. 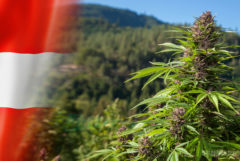 Cannabis in Austria – Laws, Use, and History

Tanzania’s government has launched new campaigns to discourage cannabis use in the country. They’re also continuing to burn cannabis plantations as part of their eradication programme. As such, legalisation seems unlikely.

Given how widespread drug trafficking is in Tanzania, it’s improbable that the authorities will win their ‘battle against cannabis’ any time soon. This leaves the people of the country mostly free to cultivate and consume the plant, though the penalties are relatively steep if they are caught and prosecuted.

8 thoughts on “Cannabis in Tanzania – Laws, Use, and History”