Bud Rot: How to identify and prevent this and powdery mildew or cannabis mould

There are few things worse than lovingly nurturing a crop of cannabis through vegetation and flowering, only to have mould strike in the last weeks before harvest. Unfortunately, this span of time is exactly when the most common types of cannabis rot and mould infections usually occur. Knowing the reasons for this also suggests how to prevent them occurring.

Unfortunately, by the time that mould is easily visible, invisible mould spores will have contaminated a much larger area. The only way to really get rid of mould, mildew and bud rot on cannabis is amputation; tragic though it is, the parts of the plant that are afflicted must be cut off as soon as the problems have been identified, plus a good area around them to allow for the spores.

Not only is it very unhealthy to inhale or consume the spores, if they are left on the plant then the same problems will continue.

Some strains of cannabis are especially susceptible to these problems, for example the Big Bud, simply because the buds are so large and dense; this is the downside of it being such a high-yielding variety!

Some are more resistant, such as the Early Skunk. For growers without much experience, choosing a hardy, mould resistant strain is a good idea to give more chance of success.

Outdoors, there is obviously little that can be done to decrease the humidity of the air. As the seasons begin to change from summer to autumn, in most climates it is still warm but the rain increases.

The best ways to tackle the problem are removing any mulch, straw, or random vegetable matter from around the bottom of the plants, and increasing the airflow around and between the buds, as detailed below. If they are in pots, bringing them to a sheltered, covered place when it is raining is worth trying.

Indoors, getting a dehumidifier will help, even is if is a simple one with crystals that absorb moisture from the air rather than a big one that must be plugged in. It is worth investing in a hygrometer to measure the relative humidity inside a growroom.

The optimum humidity varies depending on what stage of life the plants are in. For vegetation, it should be between 40% – 70%; during early and mid flowering, it drops to 40% – 50%; in the final stages of flowering, less than 40% will help to prevent cannabis moulds and powdery mildew.

Cause: Lack of airflow

Indoors, make sure there is sufficient airflow using oscillating fans and a strong air outflow. It is simple to tell if there are areas of stale air because the plants will not move in those places. There should be gentle but visible movement of the fan leaves and smaller branches.

If the lack of air movement is above the plants, increase the outflow. If it is below the plants, point oscillating fans at the bottom of them. Outdoors, it is generally impractical to try to point fans at plants. If the plants are in pots, moving them to a more exposed and windy position during the day when it is not raining will help a little.

To help prevent mould and fungus on cannabis growing either indoors or outdoors, the airflow through the plants and around the buds can be increased by carefully trimming off large fan leaves and any branches without any buds on them.

As the plants head towards harvest time, their energy is mainly concentrated in the buds and will be drawn out of the feeder leaves anyway, so it’s better to sacrifice them for increased airflow. 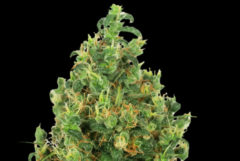 Cause: High or low temperatures without fluctuation

For indoor cannabis cultivation, some fluctuation in temperature is desirable because it reproduces the natural drop in temperature during the night, and the aim of indoor growing, lest we forget, is to fake the most ideal natural outdoor growing conditions.

Using a digital thermometer that records the minimum and maximum temperatures during a 24 hour cycle will establish whether or not there is fluctuation in temperature, and what the range is. Usually it is high temperatures that are more of a problem with indoor growing. Lowering them can be achieved with increased air outflow and air movement.

Now the three main causes of mould, rot, and mildew have been explored, let’s get to the three afflictions themselves, and how they manifest.

Finally, no matter how much effort might have gone into a harvest, consuming mouldy or mildewed cannabis is never worth it. People with compromised immune systems, illnesses or any other type of affliction should be especially careful as there are serious health problems that can occur from inhaling mould spores!