How do you make your growroom more eco-friendly? Something that is often a cause for concern among many fans of cannabis – perhaps because we tend to be more conscious of the importance of plants and the beauty of the planet we live on – is the environmental impact of indoor growing. Here Sensi Seeds presents three tips for creating a greener growroom.

Have you ever thought about the carbon footprint of the cannabis you’re consuming? Apparently, “a single (lamp-grown) cannabis cigarette… is equal to running a 100-watt light bulb for 25 hours of average US electricity.”

It might seem a daunting task to reduce the environmental impact of your grow, when frankly there are so many other factors to worry about, but by implementing a few changes you can make a significant difference.

1. Lighting – switch to LEDs to lower heat emissions and electricity use

The discussion about whether HPS (High Pressure Sodium) lights can be surpassed by LED (Light Emitting Diode) lights has been ongoing since the introduction of the latter onto the market as viable room lighting. There is still vigorous support for both types of lighting among cannabis growers. Many online platforms host passionate debates on which is best in terms of yield and quality.

It is true that LEDs did not exactly take the cannabis world by storm when they first became available, with lack of standardization, and prices that were out of reach for most home growers. This is no longer the case.

The most recent impartial report  (The carbon footprint of indoor Cannabis production by Evan Mills, 2011, which also provided the statistic above) concludes that HPS results can be matched by the most top of the range LEDs. These do still require a bigger financial investment than either HPS or cheaper LEDs. In terms of energy consumption, however, they are certainly more efficient. This makes them cheaper for the grower in the long run, and better for the planet as soon as you turn them on.

The other major environmental benefit of LEDs is the far lower amount of heat that they produce. This makes them less of a contributing factor to climate change both directly and indirectly, since extractor fans to control growroom temperature are unnecessary – a further saving on electricity consumption (and an added bonus for avoiding heat detection sensors).

In addition, they last a lot longer than HPS bulbs, and do not require ballasts and reflectors, so overall fewer materials go into their use and less waste is generated.

Both LEDs and HPS lights (also CFLs) can and should be recycled. Most shops that sell these bulbs will also accept old ones for recycling if you return the old ones when you buy a new one.

There is also a company called Recolight which provides collection points for bulbs, with a handy page on their website for locating the nearest point to you: http://www.recolight.co.uk/. Of course, you may find it more useful to locate a point further away from you if you wish to err on the side of caution! 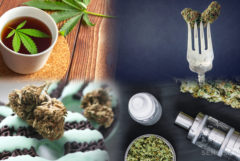 3 Healthier Ways to Use Medicinal Cannabis

Mineral wool, also known as stonewool and more commonly as rockwool after one of its manufacturers, has been a favourite of indoor growers for years. It does have undeniable practical advantages. It’s lighter than soil, easy to obtain and work with, plus it comes in those handy pre-formed cubes.

Some claim it is a natural material, since it is modelled on Pele’s Hair. This mythical-sounding substance is formed when volcanoes erupt (Pele is a volcano-dwelling Hawaiian fire goddess) and tiny droplets of molten basaltic glass elongate and solidify into long, fine, hair-like strands.

In order to recreate this, a blend of chalk and rock is heated to around 1600 degrees centigrade and then has air or steam blasted through it. This is an extremely energy-intensive process which uses non-renewable components; both factors to be avoided if you’re concerned about climate change and environmental welfare.

Reusable substrates have to be practical, or no-one will re-use them

Theoretically, rockwool can be reused. In practice, this writer has never met a cannabis grower who actually does this. The roots of cannabis, whether seedling, clone, or mother plant, run deep and strong and fine. The same qualities that make hemp ideal for aerating and improving soil cause cannabis to bond almost inextricably with rockwool. Algae and mould often grow on top of it, and must be completely eliminated it if it to be re-used.

Removing all old root matter and thoroughly cleaning a substrate that is brittle, prickly and irritating to the skin is, understandably, too labour-intensive for all but the most dedicated of growers. Used rockwool tends to end up in landfills, on dumps and even at the side of roads, where – since it is basically candyfloss made of rock – it won’t biodegrade.

So what are the alternatives? Plain old soil is obviously the simplest environmentally friendly substrate. Disposing of it is also far more low-profile, as it can be simply ploughed back into your garden if you’ve got one, or spread around any handy public green area if you haven’t. It’s easy to re-use for subsequent grows.

It should be thoroughly flushed (but of course you should be doing that anyway!) and clumps of roots should be broken up and evenly mixed through to avoid ‘hot spots’ of decomposition. You may need to add some extra nutrients but as the roots will release valuable nutrition back into the soil as they decompose, you are making the most of your previous crop rather than having to separate it out.

Coconut fibre, also known as coco coir, is an excellent substitute for those who want the convenience of rockwool in a natural form. It is produced from mature coconuts (so the rest of the coconut gets used too!) by separating the long, tough fibres from the hard inner shell.

Coir intended for gardening is generally pre-treated by being soaked in a calcium buffering solution since it is high in sodium and potassium, so all you usually need to do to prepare it is soak it in water, rinse it well and fluff it out.

Not only does coir beat rockwool in terms of its production carbon footprint, it is a lot easier to re-use. As usual, it should be thoroughly flushed for the last few weeks before harvesting. The main root ball separates from the coir quite easily (some growers prefer to let it dry out a bit first) and the very fine roots can be left in there. There are plenty of reports of coir being re-used for as many as six grows.

Not only that, but the subsequent grows often perform better than the first one as the coir becomes ‘seasoned’. Environmentally, the only real downside of coir is how far it has to travel from the coconut palms to your local garden centre.

If only there was a coir equivalent that could be produced more locally! Well, there is, and it should be obvious to all of you. Hemp fibre has the same strong, lightweight and water-retaining properties, grows much faster than coconuts, and is outstanding as a sustainable resource. Thus far, needle-punched hemp fibre mats are producing excellent results for microgreens such as cress.

A large amount of Europe’s cress supplies are grown on hemp mats from Sensi Seeds’ sister company HempFlax. The much larger root systems of cannabis require bigger, deeper mats, and thus far it has not caught on as a substrate for cultivating it, but it shows a great amount of promise. As use and production of hemp increases, expect to see more of one plant helping to grow another!

Clay pellets – not as innocent as they look

The other substrate commonly used by cannabis growers that should be eliminated from your ‘greener’ growroom is Lightweight Expanded Clay Aggregate, more commonly known as clay beads, hydro beads, clay pellets etc. Although at first glance they may seem like a natural product, and can potentially be re-used many times, their manufacture is by no means environmentally friendly.

They are produced using a non-renewable resource, namely clay. This is strip-mined from countryside, destroying trees, wild land and the natural habitats of many species. Then it is heated to temperatures of around 1100 – 1200 degrees centigrade in giant rotating kilns; as with the manufacture of rockwool, this is an incredibly energy-intensive process that produces tons of heat.

Leave it in the ground, for peat’s sake

Finally, stop using peat pellets. Although they are very handy for planting newly-germinated seeds, and are a natural and biodegradable product, they are not a sustainable resource. It takes literally thousands of years for organic matter to decompose into peat, and the exact set of circumstances needed for this to happen are pretty rare.

In addition, peat bogs are the most efficient carbon sink ecosystem on the planet, and it takes centuries for them to recover from disturbance. We really shouldn’t be digging them up just to make little discs that do something which – let’s face it – half a toilet roll tube full of potting soil will do just as well.

For a lot of you, this might be the easiest change to make since it doesn’t require radical changes to your set-up, or a lot of investment. By switching to autoflowering strains such as Sensi Seeds Skunk #1 Automatic or White Label Northern Lights Automatic, you will automatically use fewer resources (see what I did there?).

The shorter overall grow time means less watering, less electricity, and less effort; the shorter vegetation period means you can switch to a 12/12 lighting cycle in a couple of weeks, rather than months. The smaller size of the plants means less substrates, and relative to their size, many modern autoflowering strains can produce highly satisfying and worthwhile yields.

Nowadays there is a wide selection of autoflowering varieties to choose from, so pretty much every taste and budget is catered for.

A journey of a thousand miles starts with a single step

So, don’t feel overwhelmed by needing new equipment or having to learn new techniques. The best ecologically sound solutions for growers often require only replacing one medium with another. In the suggestions outlined above, the replacement – LED for HPS, coir for rockwool, growstones for clay pellets – will behave in much the same way.

It is important to begin with small steps, because as individuals, these are often the only ones that we can take. But every step makes a difference.

3 thoughts on “Three Ways To Make Your Growroom Greener”