Alzheimer’s Disease is a progressive neurodegenerative disease that typically presents itself in adults over the age of 65. The disease causes symptoms such as dementia; as it progresses, it renders the sufferer increasingly unable to care for themselves. There is no cure for Alzheimer’s, but medications such as cannabis may slow its progression.

The biochemistry of human neural networks is vastly complex and not yet fully understood. However, it’s thought that maintaining healthy brain tissue throughout one’s life can significantly reduce the chances of developing neurodegenerative diseases such as Alzheimer’s in old age, or at least slow the onset of such diseases by reducing the rate of cognitive decline.

Regular physical and mental exercise is believed to be vitally important to maintaining neural health, and is arguably the most healthy and effective method of doing so. However, the balance of chemicals in the brain may also be improved by utilizing certain exogenous compounds such as those contained within cannabis.

Cannabis contains various compounds known as cannabinoids, which are structurally similar and have varying effects on brain function and metabolism. Of these, arguably the most important are THC and CBD, which have a range of physiological effects relevant to Alzheimer’s. They can reduce inflammation, act as antioxidants and neuroprotectants, and even stimulate the growth of new neural tissue.

So if taken regularly, there is evidence that they can not only slow the progression of existing Alzheimer’s cases but also slow the onset of new cases.

However, it’s clear that in individuals suffering from Alzheimer’s, excess amyloid beta accumulates in the brain and aggregates to form amyloid plaques, which are toxic to neural tissue.

A study published in 2014 by researchers at the University of South Florida, USA investigated the relationship between the endocannabinoid system and the process of plaque production. It demonstrated that APP cells incubated with THC at very low doses produced amyloid beta at a slower than normal rate. The THC directly interacted with beta amyloid peptide and inhibited its aggregation into plaques.

The study also showed that THC at low doses reduced levels of glycogen synthase kinase 3 beta (GSK3ß). GSK3ß is an enzyme that’s  normally involved in energy metabolism and neuronal cell development, but is also responsible for the development of neurofibrillary tangles in the brains of Alzheimer’s patients. These neurofibrillary tangles are comprised of tau proteins, particularly paired helical filament tau (PHF-Tau); GSK3ß is believed to be responsible for the production of PHF-Tau.

3. Cannabis is anti-inflammatory – Inflammation is heavily linked to Alzheimer’s

Inflammation of neural tissue is increasingly thought to play a major role in the development of Alzheimer’s and other neurodegenerative diseases such as multiple sclerosis and Parkinson’s disease. It’s thought that acute inflammation that initially occurs as a defence mechanism may lead to an uncontrolled chain reaction resulting in chronic inflammation and neuronal deterioration.

Thus, various anti-inflammatory drugs have been investigated as possible treatments for conditions such as Alzheimer’s.

Several recent studies have investigated the relationship between the endocannabinoid system and the regulation of neuroinflammation. A study published in 2009 found that the brains of deceased Alzheimer’s patients show noticeable alterations to components of the endocannabinoid system, including increased expression of cannabinoid receptors type I & II in the microglia (the principle immune cells of the central nervous system). This suggests either that a dysfunctional EC system has a role to play in the development of Alzheimer’s or that the progression of Alzheimer’s causes the EC system to become altered.

It appears that in Alzheimer’s, the microglia surround the amyloid plaques in an attempt to destroy amyloid beta clusters through phagocytosis (“eating” the unwanted tissue). However, the rapid production of amyloid beta overwhelms the microglia, keeping them in a constant state of activation that causes them to produce excess inflammatory compounds such as interleukin.

Exactly what modulatory role the cannabinoid receptors play in this scenario is yet to be proven for sure, and determining the precise mechanism will enable the development of treatments that target the microglial receptors and control inflammation at its source. 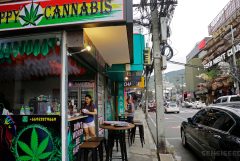 4. Cannabis is an antioxidant/neuroprotectant that can help protect cells

Oxidative stress and the release of reactive oxygen species is a key component of diseases such as Alzheimer’s, and is inherently associated with immune inflammation. When inflammation occurs, it induces oxidative stress, reduces the antioxidant capacity of cells, and causes the production of free radicals such as reactive oxygen species, which in turn react with fatty acids and proteins in the cell membranes.

The presence of amyloid beta also causes an increase in reactive oxygen species in surrounding cells through interactions with the cell membranes. Ultimately, this contributes to loss of neurons and synapses in the brain, leading to impaired memory and a range of other neurological symptoms.

Again, the role of the EC system in modulating the processes of oxidative stress is not fully understood. But it has been demonstrated repeatedly that administration of cannabinoids can help reduce its effects and can provide a neuroprotective effect on the neurons, slowing the rate of oxidative cell death.

As well as reducing inflammation and mediating the effects of oxidative stress, cannabidiol is also thought to promote the growth of new neural tissue (a process known as neurogenesis).

In Alzheimer’s, the rapid destruction of neural tissue causes devastating neurological effects and the normal processes of neurogenesis are interrupted by the presence of amyloid beta. Developing therapies that can stimulate neurogenesis may therefore slow the progression of the disease or even reverse its symptoms to some extent.

A 2011 study on Alzheimer’s demonstrated that cannabidiol exerted its anti-inflammatory and antioxidant effects via a mechanism that is independent of the EC system. Instead, it works on a receptor known as the peroxisome proliferator-activated receptor-γ (PPARγ).

By working on the PPARγ, cannabidiol was able to reduce inflammation and production of reactive oxygen species to protect existing cells. Even more, it was able to induce neurogenesis in the hippocampus (a region of the brain that is heavily affected by Alzheimer’s) by directly blocking the action of amyloid beta.

We still have much to learn of the complex processes that cause Alzheimer’s and related neurodegenerative conditions. But with what we know about the role the endocannabinoid system plays in the maintenance of neural health, there is hope. Let’s hope that new research allows the range of preventative and curative effects of medicinal cannabis to reach those who can benefit.