Cannabis’ long history and its prohibition have paved the way for plenty of myths to take shape… some of them rather funny. But how many of them might be true? Here we’ll look at some of the more peculiar myths, how they may have started and set the record straight once and for all.

Given that cannabis has been virtually prohibited for almost one hundred years, this illegal plant is now enmeshed in a host of myths. Some of them centre around its cultivation, some around how it’s further processed and many of them around its use.

While decades of discussion mean that cannabis has been relatively well researched, the black market in particular (dealers and users) cannot rely on state certificates or even contracts – it’s the spoken word that counts here. But it’s like children playing Chinese whispers, resulting in many fantastical ideas being taken at face value in pothead circles.

Some of these myths have been circulating for years or even decades, while others are more recent. Most of the tales from the cannabinoid realm of fantasy have a short half-life, but some obstinately persist right through to today. The text below is dedicated to finally getting these cock and bull stories out of the minds of certain ‘cannaseurs’.

In recent years, there have been repeated rumours that new types of weed are genetically modified. This naturally arouses scepticism, particularly among traditional critics of genetic modification, many of whom are cannabis users.  And given that the genome of cannabis isn’t truly understood yet, it’d be difficult to truly genetically modify it. Rumours don’t generally start without some foundation though, so I have looked into where this one began…

Tito Schiva and Saverio Alberti have been unique to-date in conducting such experiments, with a surprising result: cannabis is actually resistant to genetic manipulation according to the journal ‘Sonntagszeit’ issue no. 7, 17 February 2002 in an article entitled “Fluorescent Flowers”:

“The aim of the studies was originally to create standard cannabis which could reliably be differentiated from prohibited drug types. However, cannabis, of all plants, proved to be resistant to genetic manipulation.”

When questioned in 2008, Sabine Bätzing, former German Government Drugs Commissioner, admitted that the German investigative authorities had no knowledge of genetically manipulated weed. So who is behind the loose talk about genetically modified weed?

The blame lies with a toxic ornamental plant tuber that contains the alkaloid colchicine, or Autumn Crocus. Low doses of this highly toxic and carcinogenic alkaloid, which is a known spindle inhibitor, alleviate the symptoms of gout. However, colchicine also causes mutations in plants if their seeds are treated with it.

Some of the surviving plants are said to be more fertile. However, a mutation is not the same as genetic manipulation; in simple terms, the genes are doubled but not modified. This is therefore a spontaneously occurring mutation or a modification made to the genetic make-up, which we see happening all the time in nature (one of the best-known mutations is the blonde hair colour of North Europeans).

The plant is now polyploid, which means that it now has at least three complete chromosome sets whose DNA sequence remains unchanged however – unlike a genetically manipulated plant.

Treatment with colchicine resulted in a new cereal variety being created as long as 60 years ago: Triticale. This is a hybrid of wheat and rye that has been grown in Europe for decades as an animal feed and as a raw material for baked goods, beer and porridge. Since its discovery by botanists in 1934, the use of colchicine has become the most common method of creating polyploids and since the 1950s, it’s been used with virtually all cultivated plants, including beets, various fodder plants, and even pansies.

However, several factors have prevented the large scale spread of this method in the botanical underworld: the low survival rate of hemp seeds, its nasty taste resulting from residual toxins in the first two generations, poor stability of the subsequent generations and, most particularly, the health hazards when used with the substance (which should not be underestimated).

Unfortunately, just a few publications were enough to start a myth that is today often quoted in the argument against legalisation. The relatively high THC content of some varieties can be sustained only with natural selection, though.

Ever since returning hippies in the 1970s started talking about an alleged speciality grown by Afghani cannabis farmers, the so-called ‘Afghani mould‘ has been seen as a particular and rare delicacy, especially among older users. In Afghanistan though, no one would deliberately allow their crop to grow mouldy. ‘Afghani mould’ is probably just poorly stored, damp hashish that was foisted on unsuspecting commercial travellers. The fact is that mould should not be smoked.

Since as far back as the 1970s, the myth has persisted that in some countries, hashish is harvested by farmers whizzing naked across their fields, and then scraping the resin from their skin.

Despite supposed eyewitness reports from Nepal or Kazakhstan, there is no photographic or film evidence of this. The method would also be a little hairy and not very effective because most of the resin would simply remain on the plant. Indian Charas may be rubbed from the flower by hand, but the rest of the body stays covered while the farmer is at work.

4. Opium, heroin or crystal meth as a diluent

Also since the 1970s, reports of weed or hashish diluted with opium, heroin, or more recently with meth, have repeatedly been circulating. First of all, there’s no evidence for this in the form of laboratory analyses, and secondly there would be no financial gain in diluting weed with substances that are more expensive than weed itself. Thirdly, most users would immediately change their source of supply, which of course isn’t in the interest of illegal cannabis dealers. It erodes their profits.

In 2016, Abril Uno published an article claiming that Phillips Morris USA would be creating a new line of cigarettes: The Marlboro M. This new cigarette which would contain marijuana and be available in the states of Colorado and Washington. The fact that this was published as an April Fool’s joke didn’t stop this “news” of quickly spreading.

With the laws surrounding cannabis use swiftly changing, it didn’t seem like such a far-fetched idea. But the fact is that cannabis isn’t legal on a federal level. So while it may become a reality in the not so distant future, at the moment there’s no such thing as the Marlboro M marijuana cigarette. 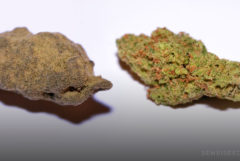 Hash vs Weed: What’s the Difference?

In countries where cannabis flowers are legal for medicinal purposes, many patients prefer varieties with a high level of active ingredients. There is no danger of over-dosing because the THC content is precisely indicated. This means that patients need to smoke, eat or vaporise less plant material to achieve the desired effect.

The active ingredient has nothing to do with the development of problematic consumption patterns. These are shaped by quite different factors such as the parental home, school and personality development. Opiate or opioid patients increase their dose more quickly and more often during the course of a treatment than cannabis patients, who alleviate their pain with highly potent varieties.

A dependency on wine does not develop more quickly than a dependency on beer: as with all substances, what matters is the total amount consumed. Safe cannabis use means being able to verify the active ingredient content, which is impossible in an uncontrolled black market.

In Morocco, hashish is sieved, with the quality indicated by the number of sieving processes. The first sieving is the best, and depending on the farmer and the quality of the raw materials, the cannabis batches are sieved up to six times. This reduces the resin content but increases the plant content.

During the final sieving process, a lot of pressure and heat is usually needed to get the hashish to stick. In Europe this is the well-known ‘standard leaf’ which first needs to be heated in order to crumble it.

Zero refers to zero sieving, i.e. what the farmer picks before the cannabis plant batch is sieved. To obtain this, he briefly bangs the batch against the edge of a bowl once or twice. The yield from this method is so low that it’s  only enough for personal use or, at best, for a few friends or acquaintances.

Zero-Zero truly does mean 00 sieving, i.e. what falls off when the plant is briefly shaken once, without banging it against the edge of a bowl. This yields even less. Some farmers do sell their best non-sieved hashish, but the volumes produced aren’t nearly enough to meet the volumes of Zero-Zero found in Dutch coffee shops alone.

The really good varieties in the coffee shops are usually the result of the first, second or third sieving. After all, even hashish sieved three times is by far superior to most of the hashish sold in Europe. 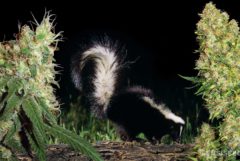 What Is ‘Skunk Weed’? A Beginner’s Guide to Skunk

8. You can smoke hydrangeas

The media keep reporting on alleged hydrangea thieves who, because of a lack of cannabis flowers, are ransacking front gardens in search of a replacement high. However, most types of hydrangea have no psychoactive effect; in the worst case you might get hydrogen cyanide poisoning, but not a high.

And no cannabis lover has ever been caught in the act. The countless reports are all based on assumptions. This myth was started by a German pharmaceutical magazine which to this day has failed to rectify its mistake. Most of the hydrangea thieves are squirrels.

9. The American constitution was written on hemp paper

Neither the constitution nor the Declaration of Independence or even the Bill of Rights were written on hemp paper. While the drafts of these three historical documents may have been written on hemp paper, which was widely available at the time, the actual charters were not. They were all set out on vellum, a type of fine parchment (lat. levior membrana) made from calfskin and calf foetuses.

10. Levi’s first jeans were made from hemp 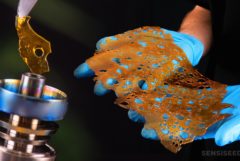 We keep reading that it’s possible to get high without smoking cannabis first. THC that’s not used up supposedly deposits itself in fat cells and is returned to the bloodstream when you sweat or lose weight. However during physical exertion, as well as the body’s own opiates, the cannabinoid anandamide is released which contributes to the so-called ‘runner’s high’.

In addition to these 11 ‘top myths’, there’s plenty of further ignorance and half-truths surrounding this illegal plant: there’s no cannabis planet, and neither did Bruce Lee die from using weed.