44% THC – Does Berlin have the strongest weed in the world?

Since 2007, extremely high peak values of THC content have been regularly found in Berlin. Statistically speaking, Berlin is the record holder since 2010, with an active ingredient level of 44% THC in cannabis. What is really behind this?

A question from a Berlin FDP politician about the THC content of the cannabis products seized between 2007 and 2017 revealed some surprising peak values. Although the average level of active ingredients in the cannabis seized in Berlin was only between 11.1% and 13.7%, the peak values were surprising: Although the 46% THC level for hashish is credible, the peak value of 44% THC in a batch seized in 2010 is almost unbelievable. And 37.9% and 39.7% THC in respectively 2009 and 2011 also caught our attention. Except in 2016, cannabis buds with more than 30 per cent THC content have been found every year.

Given that values like this are not even achieved when growing medicinal varieties, and that you will search in vain in the Dutch coffeeshops or in a Californian dispensary for buds with more than 30% THC, the peak values in Berlin are puzzling to anyone who has taken the time to look more closely at the active ingredient levels of different varieties of cannabis. The strongest medicinal strain in Europe currently has 22%, and in Canada 26%.

Even Godfather OG, the strongest ever tested weed in the world and High Times Cup Winner in the category “Highest THC content” could “only” go up to 34% THC when measured. With the exception of these varieties, only bred recently, even the cup winners in this category never reached 30% until 2016. In light of this, the continual high values in Berlin cannabis, grown illegally and under worse conditions than all the medicinal strains or cup winners, is astounding.

Overall, except in 2016, the top values for Berlin weed showed higher THC levels than all other varieties that were tested worldwide under medicinal programmes or for Cannabis Cups. A good enough reason to ask the Berlin police what might have caused these glaring differences; the Press Office for the Berlin police replied as follows to a question along these lines:

“The occasional high values for marijuana (cannabis weed) can be explained by occasional measurements of a combination of cannabis weed and cannabis buds with a high proportion of buds.[…]. A “glaring difference” to measurements in other countries around the world cannot be asserted, as the figures are not seriously comparable without a precise description of the measuring methods and an exact description of the material being evaluated (leaves, buds or a mixture of both). […].”

With a mixture of buds and less potent leaves, the buds would have had an even higher THC content than the already questionable 44%. 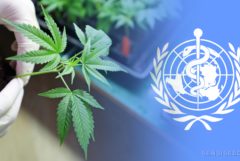 WHO Recommends Cannabis Reclassification: What Does it Mean for THC and CBD?

To the question as to how the seized cannabis products were tested, the Press Office replied:

“For many years now we have had an accreditation from the German accreditation authority (DAkkS) under DIN EN ISO/IEC 17025, covering among other things the testing of narcotics and determination of levels of active ingredient THC, under the registration issued by DAkks number D-PL-13241-01-00. The samples are examined according to the provisions of the “Guidelines on quality assurance for forensic chemical testing of narcotic and medical substances” from the Society of Toxicological and Forensic Chemistry (GTFCh), […].”

As a comparison, when asked, they referred to the test results of medicinal cannabis from Canada and The Netherlands, which are supervised by the German ‘The Federal Institute for Drugs and Medical Devices’. Medical cannabis from Canada or the Netherlands is also tested in DIN EN ISO/IEC 17025 certified laboratories, and the laboratory also needs to be approved under DIN EN ISO 15189. Voicing doubts about these comparative values does not make the statements from the Berlin police about the THC content of their seized cannabis any more credible. When this was pointed out to them, the Press Office added:

“[…] the results of measurements of the samples seized from illegal cannabis plantations with a large number of different varieties cannot (be) compared to the hemp grown under controlled conditions for the pharmaceutical industry. In addition, following a ruling by the upper regional court, the measurement of cannabis products containing the psychotropic substance THC is carried out in most forensic laboratories using gas chromatography, in order to include the non-psychotropically active THC acids that become THC at higher temperatures. Alternatively, high performance liquid chromatography (HPLC) can be used to measure the cannabis products. As this analysis technique involves the separation in liquid form using a separation column at approximately room temperature, the THC acids are not converted into THC. Cannabinol (CBN), cannabidiol (CBD), THC and THC acids are recorded and measured separately. Adding together the THC and THC acids following conversion then yields the actual THC content. This THC content may then end up being higher than using the methods you mentioned at other laboratories.”

Even if the total THC acid level was converted into THC, the presence of these high THC levels over the years cannot be explained, especially if they were found in a mix of buds and leaves. Variances of 10% to 20% in test results from medical laboratories cannot only be the result of different ways of measuring the THC acid content. To yield a peak value of between 33% and 44% it would have to be almost as high as the actual THC content.

If that were really the case, then patients could also increase the THC content of their medication to such high levels using simple decarboxylation. There are no recorded instances where medicinal cannabis has shown a THC content as high as the peak values found in Berlin, even after full decarboxylation.

If the values really do meet the criteria of the law, then either they are random and far from precise, or even worse: Two different standards are used to measure for patients and for offenders. The values in Berlin lead inexorably to the suspicion that the THC content for criminal offences does not reflect reality, but is inflated using unrealistic measurement methods because that affects the level of the sentencing.