Post-traumatic stress disorder (PTSD) is a psychological condition that occurs in response to severe or protracted stress, such as experiencing warfare or interpersonal violence (which may be physical, emotional or sexual). Numerous PTSD sufferers self-medicate with cannabis, and several studies indicate potential benefit.

As the name suggests, post-traumatic stress disorder (PTSD) comes as a direct result of experiencing a traumatic event., Symptoms include flashbacks of the traumatic event, avoidance of associated triggers, anxiety, depression, anger and hyper vigilance.

Conventional therapy for PTSD mainly includes psychotherapy, with a focus on cognitive therapy, exposure therapy and eye movement desensitization and reprocessing (EDMR). Depending on the severity of symptoms, some PTSD sufferers are also prescribed anti-depressants and anti-anxiety medications.

According to a 2019 study published in the European Journal of Psychotraumatology, it is estimated that around 354 million adults worldwide experience PTSD, with 117 million suffering from comorbid PTSD and major depression. These figures are the result of analyses of those affected by war between 1989 and 2015, and who were still alive in 2015. According to this meta-analysis, around 33% of PTSD sufferers will also be diagnosed with major depression.

Research has demonstrated a high incidence of substance abuse among those with PTSD. In one study, women in particular showed higher rates of PTSD and substance abuse comorbidity — between 30% and 59%. For women in this category, PTSD is most commonly caused by repetitive childhood physical and/or sexual assault. For men, comorbidity rates are two to three times lower, and usually stem from combat or violence related trauma.

Another small-scale study including 91 participants attending a community based substance abuse program found that up to 52.8% of participants had some form of PTSD. While 37.4% were considered to be sufferers of PTSD, the remaining 15.4% were found to have “possible PTSD”.

Whether cannabis can be truly seen as a treatment for PTSD remains in question, as affected individuals may seek solace in such substances whether or not they are truly effective medications.

Although there has been significant research into substance use among those suffering from PTSD, studies relating to the effectiveness of cannabis as a treatment are relatively sparse. Up until relatively recently, the consensus among the medical community generally was that PTSD was a contributing factor in cannabis use disorders, and little investigation was undertaken into the brain mechanisms by which such disorders develop. 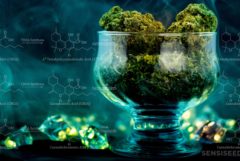 What Are Cannabinoids and What Do They Do?

The role of the endocannabinoid system in PTSD

Understanding of the complexities of the endocannabinoid system has increased in recent years, and the role that it may have to play in regulating the symptoms of PTSD and similar disorders has come into focus. An article published in 2012 noted that stress-tolerant individuals exposed to acute stress in the form of a parabolic flight experiment demonstrated significantly increased endocannabinoid concentration in the plasma. Non-stress-tolerant individuals experienced no increase.

However, these individuals were healthy, and not suffering from any chronic stress condition. PTSD (and other chronic stress) sufferers, on the other hand, showed consistently elevated levels of endocannabinoid concentration compared with non-sufferers, even in ordinary, non-stressful situations. This implies that the endocannabinoid system plays a role in the stress response, but the exact mechanism is still unclear.

This research shows a possible biological marker for diagnosing PTSD, which in most cases, is done through questionnaires. While the study itself does not specifically refer to PTSD, it refers to the psychological phenomenon underpinning PTSD: the repeated fear response in the absence of a threat.

Genetic phenotype of CB receptors could increase predisposition to PTSD

Another 2012 study by Alexander Neumeister supports the findings of the Nature Reviews Neuroscience study mentioned above. The article describes the role of the CB1 receptor in the experience and memory of stressful events. Normal endocannabinoid signalling through the receptor assists in extinction of fear, and impaired signalling is associated with a failure to eradicate memories of trauma. This was also linked to chronic anxiety and depression (in animal subjects).

The article also noted that existing medications for PTSD have been implemented “opportunistically” when their benefits were discovered, and that such medications had usually been originally designed for other conditions. Often, such drugs are of limited effectiveness and may occasionally cause serious side-effects.

Overall, there is a common thread in academic literature that there is a link between endocannabinoid signalling, fear processing and the development of PTSD. While PTSD relies on a traumatic event to occur (without the trauma, the condition is not PTSD), there may be a genetic predisposition to the condition.

Neumeister concluded in his research that THC may provide temporary relief of PTSD symptoms, but long-term use could lead to impairment of CB1 receptor signalling. This could cause an increase in the severity of anxiety, irritability and sleep disturbance in PTSD sufferers.

A 2009 study also investigated the efficacy of a synthetic cannabinoid as an adjunctive treatment for PTSD. An adjunctive therapy is one that is prescribed in addition to a primary medication. In this case, the primary medications were antidepressants and hypnotics, and the synthetic cannabinoid used was Nabilone. This study found that 72% of patients experienced cessation or reduction in nightmares, improvement in sleep time and quality, and a reduction of daytime flashbacks.

Although the results of this study are promising, the small sample size of just 47 individuals means that further research must be done to determine the effectiveness of nabilone. As interest in use of cannabinoids as treatment for PTSD is increasing so rapidly, we are likely to see the results of further research in the future.

Other ways that cannabis can alleviate symptoms of PTSD

As current understanding of PTSD goes, there is no pharmacological way to cure PTSD because of the nature of the condition. It is acquired from a trauma, and there is no known pharmacological treatment to “undo” a trauma. This is why treatment typically includes managing symptoms of anxiety, insomnia, depression and flashbacks. While cannabis may not technically cure, or even contribute to a cure for PTSD, it has properties that may help with symptoms.

1. Cannabis may have anxiolytic effects

While the anxiolytic effects of THC have been questioned many times over the years, there is a general consensus among scientific academics that CBD especially has anxiolytic effects. For certain individuals, THC is also able to reduce anxiety symptoms.

One of the major symptoms of PTSD is anxiety, and it is often one of the symptoms that can be managed with medication. A 2011 study on mice concluded that overexpression of CB2-receptors reduced anxiety-like behaviours and caused an increase in gamma-aminobutyric acid (GABA) in the hippocampus and hypothalamus.

In another study (in vivo, on humans), individuals with PTSD were found to have reduced levels of endogenous cannabinoid, anandamide. Consumption of CBD is thought to increase serum levels of anandamide by inhibiting FAAH, the enzyme responsible for anandamide degradation. This is one mechanism of action by which CBD is thought to have anxiolytic and anti-depressant effects.

The neuroscientific understanding of PTSD is still in elementary stages, but scientists are constantly looking for reliable biomarkers for the condition. Naturally, and as mentioned before, endocannabinoid signalling shows promising potential. In this 2018 research, Graziano Pinna discusses the role of neurotransmitters in cases of PTSD, and the possibility of using neurology as a form of PTSD treatment.

Essentially, Pinna suggests that certain chemical processes in the brain that contribute to neuroprotection may play a role in the regulation of cognitive processes and emotional behaviour. While we are only beginning to understand how neurology affects human behaviour and emotion, it is something intuitive to the field of study.

Phytocannabinoids THC and CBD have demonstrated neuroprotective effects countless times in academic research, including the ability to stimulate neurogenesis. While it is not clear exactly how neuroprotection can relieve symptoms of PTSD, a connection has been established. 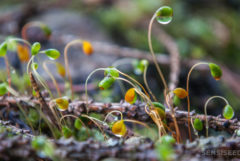 Other Plants with Cannabinoids: Looking Beyond Cannabis Plants

As mentioned earlier in this article, many PTSD sufferers experience treatment-resistant nightmares. In the study referred to earlier, patients experiencing nightmares demonstrated a positive response to Nabilone, a synthetic cannabinoid.

How THC and CBD may reduce nightmares has not been established, but the general understanding is that THC decreases sleep latency. By doing so, it may help PTSD suffers to achieve sleep and to remain in a more-or-less dreamless slumber. By decreasing sleep latency, REM sleep is either bypassed or shortened too much to induce nightmares.

There is still a lot to understand about PTSD as a condition, and even more about how cannabis can be used as a treatment. There is controversy surrounding cannabis as a treatment for PTSD because it is not a treatment per se, but an adjunctive therapy to reduce symptoms. It poses the potential for abuse or addiction, especially because PTSD sufferers are more likely to develop substance abuse disorders.

However, despite the ongoing controversy surrounding the effectiveness of medical cannabis as a treatment for PTSD, the Medical Cannabis Advisory Board recommends keeping PTSD on the list of qualifiers allowing prospective cannabis users to take prescriptions.