Cannabis and Yoga: The Perfect Pair?

Cannabis yoga, ganja yoga or 420 yoga is the subtle art of mixing cannabis and yoga together. This modern way of practising yoga entails vaporizing or eating a small amount of cannabis before getting into the poses. According to the pioneers of this new-age yoga, cannabis helps to raise concentration and helps to drop a person into their body faster.

There are many different types of yoga, and all of them have the same common goals: physical, mental and emotional improvement. And of course, we can’t forget the emerging of subject and object reality into the classical mystic state and experience of oneness.

Cannabis and yoga: then and now

Using cannabis during yoga practice is very much a new-age practice. While there are references to cannabis use in ancient Indian religious texts, it’s likely that these two activities would have been separate. The modern practice of Hinduism and yoga, depending on the variation, often forbids intoxication during meditation or yoga. However, the Vedas specifically refer to an intoxicant called Soma, which all yogis should take. In that way, intoxication is not foreign to the tradition, but in India, yogis don’t usually allow a participant of yoga or meditation to be intoxicated.

In Ayurvedic philosophy, there are two ways to use cannabis, one of which makes it a nectar, and the other that makes it a poison. Used incorrectly, cannabis takes on tamasic qualities, meaning it is the kind of drug that hides pain or emotion. It is described in Ayurvedic text sometimes as a nectar, perhaps when being used medicinally. But used recreationally, it is a “dimmer switch”, and can never induce spiritual revelation.

Ganja yoga is a rather new development, and has really only been popularized in cannabis-friendly states in the USA such as California, Washington and Colorado. Around Canada, ganja yoga has been a thing for years.

It is commonly taught that combining cannabis and yoga goes way back. This is because Shiva is often depicted holding a chillum, the Indian pipe for smoking cannabis. However, while cannabis has a rich history in Hinduism and the Vedas, there is not a whole lot of evidence to suggest that cannabis was used during yoga practice. It seems that ganja yoga is a discovery of the new-age.

What does ganja yoga entail?

Cannabis enhanced yoga classes are relaxation gatherings. Usually, teachers and participants vaporize, since this is considered the cleanest way to smoke ganja. Eating it before is also possible, but vaporizing is much easier to dose and much easier to share with a whole classroom.

Commonly, participants will gather first to share cannabis and will then enter their meditation and yoga poses. If the teacher is really good, they will also pick a strain of cannabis that is conducive to that particular class. For example, some yoga classes are more dynamic, while others are more recovery-focused such as yin yoga.

Usually, ganja yoga involves doses closer to microdoses than regular doses. Very small amounts are vaporized or a very small amount of tincture is consumed, for example. This is because heavy intoxication is probably not conducive to concentration — or doing yoga poses!

In this Forbes article, Eliza Maroney, aka The Cannabis Yogi talks about her cannabis yoga classes. In her classes, students are able to choose between a myriad of different products. They continue microdosing until the minimum desired effect is reached, after which they are led through a 45 minute Vinyasa-Yin practice. 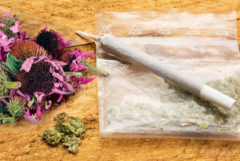 Healthy alternatives to tobacco that are the perfect mix with cannabis

Cannabis is not commonly thought of as a tool for increasing concentration, or at least, it is not typically used to bring about concentration. But this is probably because the object of concentration during a cannabis high is something obscure or not so obvious, such as an emotion. Professor, Arthur C. Hastings describes it perfectly in his article, “Effects of Marijuana on Consciousness”:

The process of attention is clearly affected by marijuana. The most obvious effect is to narrow the amount of diverse contents in the focus of attention. The person under marijuana usually perceives fewer objects of attention, which may mean physical objects, actions, social elements, emotions, etc. We have already noted this effect: a person who is high may become absorbed in an object, event, or process to the exclusion of everything else. A train of fantasy may occupy all of a person’s attention. This is a psychological analogy to tunnel vision, with the contents of the tunnel expanded.

In fact, this undivided attention to a thought, emotion, fantasy or sensation is precisely what is supposed to connect someone with the feeling of “oneness”. At least, this is how it is presented by Zen masters, whereby concentration on a single thought is the passage “through”, and pretty much defines meditation.

This is why Zen masters and true Yogis are not usually dividing their attention between multiple stimuli. Rather, they are completely absorbed in a single task at the expense of all other stimuli. It is a way to dwell in the immediacy in the moment, which is something that cannabis users often report. It is as the old Zen story goes:

When a student asked his teacher, “Master, what is enlightenment?”, the master replied, “When hungry, eat. When tired, sleep.”

Therefore, in the context of modern society, this is extremely difficult to achieve. The modern world demands attention all of the time in the form of media, jobs, family, and smartphones. This is exactly why people seek the meditative state, or the “here and now”. And this is why such concentration is applicable and relevant in the practice of meditation or yoga.

Dee Vee Marie was one of the first yoga teachers in the West bringing cannabis into yoga practice. She owns Follow The Bliss in Toronto, and advocates for the use of psychedelics to achieve the mystical experience. She believes that psychedelic substances are at the crux of all mystical traditions. She touts cannabis, mushrooms, and herbs as tools for awakening the “God within.”

Cannabis is humanity’s oldest crop, so it is not surprising to find that it has been intricately associated with spiritual awakening.”, Lu from The House of Yoga in Toronto.

But Lu also comments that she personally doesn’t think ganja yoga will become a trend because of the social anxiety about publicly admitting to smoking cannabis. She certainly hopes that there will be an “increased acceptance of using sacred plant medicines as spiritual tools”.

While there is a lot of potential for the canna-yoga combo if used correctly, there are also certain risks involved. The most obvious risk with using cannabis during yoga is the threat of injury. It’s one thing to sit and meditate during a cannabis high, and another thing to stretch and twist the body. Some might argue that cannabis helps a person to better perceive the body, and therefore avoid over-stretching or over-exerting. For others this may not be true.

In any case, there is such great potential for cannabis to improve concentration in a moment dedicated specifically to meditation. In this way, cannabis might be the missing ingredient from a yoga class that so many people have been waiting for.

Sensi Seeds will continue to watch, write and enlighten…

Have you ever used cannabis during your yoga practice? We would love to hear about your experience in the comments!

8 thoughts on “Cannabis and Yoga: The Perfect Pair?”