A cannabis plant is hardy, but its health and vigour will be negatively impacted if it is deprived of essential nutrients. If this is not corrected, it can cause plants to stop growing or even die. Deficiencies in cannabis can be hard to identify, so we have compiled a basic list of what to look out for if things go wrong, and how to fix them.

New cannabis growers are bound to come face to face with a problem or two. Thankfully, cannabis plants are resilient and can stand up on their own in the face of pests or improper growing conditions for a while. But if the problem isn’t rectified in a timely manner, there’s going to be consequences.

One of the biggest mistakes new growers make is overreacting, though. If an iffy situation is spotted, growers should simply acknowledge that and take the time to learn what the problem is and how to properly fix it.

This guide will go over some of the most common problems that can be identified by simply inspecting the leaves. It also will explain how to proceed and get those plants on the road to recovery… and a better yield!

While this definitely isn’t a conclusive list, here are some common growing problems and how they may be identifiable on cannabis leaves (read the rest of this guide for more in-depth help):

1. Nitrogen deficiency in a cannabis plant

Nitrogen deficiency is probably the most common deficiency reported by cannabis growers. It’s usually easy to identify and correct as soon as it becomes apparent, although it shares a basic resemblance to several other deficiencies in the early stages.

In the early stages of nitrogen deficiency, leaves appear to be too light in colour—almost yellowish-green—compared to the desired deep green of healthy leaves. Nitrogen-deficient leaves also typically have slightly darker veins compared to the very light colour of the leaf tissue itself—although the contrast is not as marked as in some other deficiencies.

At the other end of the spectrum, nitrogen toxicity results in leaves taking on a very dark green hue that can look almost black in extreme cases.

In severe cases of nitrogen deficiency, the leaves appear lighter and lighter in colour, and eventually begin to dry out and die. The larger leaves on the lower and outer parts of the plant are often the first to be affected and the first to die.

How to fix nitrogen deficiency

If nitrogen deficiency becomes apparent in the later stages of flowering, it doesn’t need to be corrected. In fact, it’s natural for the older leaves to drop off and die at this point as they are no longer needed.

However, a nitrogen deficiency in vegetative growth or early flower can severely impact overall yield and quality, as it affects the plant’s ability to photosynthesize energy. Nitrogen deficiency can usually be corrected by simply increasing the strength of your normal NPK-based feed, but if fine-tuning is required then nitrogen-only additives are not hard to find.

2. Phosphorus deficiency in a cannabis plant

Phosphorus deficiencies are rare, but should be cause for concern. If it affects plants in the vegetative stage, it can cause reduced growth rates, small leaves, weak roots, and plants that are generally lacking in vigour. In the early stages, phosphorus deficiency usually causes leaves to appear dark but washed-out, with very dark veins and somewhat lighter leaf tissue.

As it progresses, purplish discolourations begin to appear on the main part of the leaves and the leaf edges begin to turn brown and curl downwards. The leaf petioles (the small stalk attaching the leaf to the main stem) may also begin to turn a purplish colour. In the final stages, large patches of the leaves become purplish-brown and dead, while the remaining sections turn mottled yellowish-green.

How to fix phosphorus deficiency

There are several ways you can fix a phosphorus deficiency. Just remember to take it slow. If any remedy is overdone, the plant could end up not getting enough of other nutrients and fare worse than if it had been left alone. With that said, here are a few methods for fixing it:

Once the problem is corrected, new leaves shouldn’t show the discolouring signs of phosphorus deficiency. Keep in mind that old leaves will likely not recover and that’s perfectly normal.

3. Potassium deficiency in a cannabis plant

Potassium deficiencies are particularly rare in hydroponics systems, but somewhat more common when growing in soil or a planting medium. Potassium deficiencies often arise when there is too much nitrogen or calcium in your chosen medium—which can make it difficult to correct with combined-nutrient feeds.

It is therefore advisable to correct potassium deficiency by reducing levels of nitrogen or calcium, and using a single-nutrient potassium additive if the problem persists. Checking pH and flushing your plants with half-strength nutrient solution may also help.

In the early stages of potassium deficiency, the edges of the lower, outer leaves begin to turn pale yellow, while the veins remain green. The leaf tips and edges may become dry and brown and begin to curl up or down.

As the deficiency progresses, brown, necrotic spots begin to appear all over the leaves, and the edges take on a dry, scorched appearance. New leaves may become twisted and misshapen, and older leaves will begin to drop off. Plants may also exhibit stretching (with large gaps between internodes) and in the flowering stage, buds will not put on weight as rapidly as in normal conditions.

How to fix potassium deficiency

Getting a potassium deficiency fixed in time is crucial to the production of terpenes, which will directly affect the flavour and aroma of your bud.

First ensure the soil’s pH is correct, as too high of a pH level is the most common reason for potassium deficiency. Cannabis plants in soil that has a high pH will struggle to absorb potassium. pH should generally be between 6 and 7. In hydro systems though, it should be a little more acidic. In that case, aim for 5.5 – 6.5. And as always, proper watering is vital (don’t overwater!).

If using supplements, it’s important to understand them and how they work. Certain nutrients can affect other nutrients or even completely block them out. For example, nitrogen and calcium will result in less potassium being absorbed.

4. Magnesium deficiency in a cannabis plant

A magnesium deficiency can appear very similar to potassium deficiency. In the early stages, the leaf edges begin to turn yellow while the veins remain dark. As the deficiency progresses, the leaf edges start to dry out and curl inwards; the upper leaves will also become affected until eventually even new growth is pale and chlorotic (lacking in chlorophyll). Brown spots may also appear on the lower leaves before they begin to drop off and die.

How to fix magnesium deficiency

Magnesium deficiencies are relatively common, and can usually be corrected by adding magnesium sulphate or Epsom salts to your feed. To treat this problem for the long run though, the plants should be flushed with pH6 water, then fed supplements developed specifically for cannabis plants. An even better option is fully upgrading the nutrients with premium products that cater to the plant’s growth medium (hydro, soil, or coco). 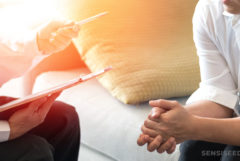 Can Cannabis Improve or Even Prevent Menopause Symptoms?

5. Sulphur deficiency in a cannabis plant

As the deficiency progresses, leaf tips and edges may begin to turn brown and dry; this effect is often much subtler than with other deficiencies causing the same symptom. In the final stages, the entire leaf appears whitish-yellow, and older leaves will begin to drop off.

How to fix sulphur deficiency

Sulphur deficiencies are quite rare, and can usually be corrected by adding Epsom salts to the feed. Depending on the severity, a few teaspoons per gallon of water should do the trick. Sulphur rich fertilisers can also be used. Some that you can consider are:

If access to fresh manure is available, layering the garden’s soil with manure is also an option that will constantly feed sulphur into the soil. Of course, some people might not think highly of getting high with weed fertilized with, well… poop.

6. Manganese deficiency in a cannabis plant

Manganese deficiency is also rare, and shares several points of similarity with sulphur deficiency. In the early stages, leaves will begin to yellow, leaving slightly darker veins. The yellowing often occurs at the base of the leaf, before spreading out towards the tip. As the deficiency progresses, brown, necrotic spots will begin to appear all over the leaves; these spots will spread throughout the plant if it is not corrected.

How to fix manganese deficiency

If caught early, manganese deficiency can usually be corrected by flushing with 6pH water and adding a light 6pH nutrient solution. It’s also wise to make sure there isn’t an overabundance of iron, since that can hinder manganese absorption. If it doesn’t clear up in about a week, consider using manganese chelate.

Sadly, if it’s reared its ugly head during blooming, there’s some serious pruning that needs to be done to get rid of affected areas. Just remember to not do it all at once, as suddenly snipping away all that foliage can cause undue stress on the plants.

7. Iron deficiency in a cannabis plant

Iron deficiency is also rare. Sometimes, you’ll notice the leaf veins remain darker green, but in many cases of iron deficiency, the veins become yellowed and washed-out in appearance. Often an iron deficiency will reveal itself in similar ways to other deficiencies:

How to fix iron deficiency

Iron deficiencies are often caused by overly high (basic) pH and can be corrected by flushing your medium with clean pH’d water and if necessary, adding an iron supplement. Iron can react with various other nutrients and cause problems of its own, so it is important to tread carefully and observe all changes very keenly.

While the signs of these deficiencies may seem similar to one another, close monitoring of plants from the beginning will help you spot them quickly. If you do happen to notice something going haywire, stay calm and use these guidelines to choose the appropriate course of action. Heavy-handed treatment in a panic will likely just lead to other problems (possibly even worse).