Diseases, pest infestations, poor environment and deficiencies can all make cannabis plants look a bit weird. But this article is all about DNA mutations, which can give rise to even stranger looking plants!

All the genetic information needed to make a plant is found in its DNA. DNA is a helical molecule, composed of two spiral strands that are connected by ‘rungs’ called base pairs. A single DNA molecule, or chromosome, contains hundreds of individual genes, each of which is made up of thousands of base pairs.  Mutations arise when a plant’s DNA is altered.

Gene and chromosome mutations occur naturally, generally at a low frequency. Higher rates of mutation occur when the DNA is damaged by a mutagenic agent such as a chemical, like colchicine, caffeine or mustard gas, or by UV, X-ray or gamma ray radiation.

Often these DNA alterations are detrimental to the plant and are not passed on to subsequent generations. But desirable or neutral traits sometimes arise through random mutations. Such traits can often be stabilised through selective breeding or natural selection. Exceptional strains can result from random, beneficial mutations.

This article covers both one-off mutations of the type that might pop up occasionally in a single plant, and mutations that have been stabilised through natural selection or selective breeding.

Young cannabis plants display opposite phyllotaxy, with alternate phyllotaxy becoming evident as the plant nears sexual maturity. Whorled phyllotaxy is a relatively common cannabis mutation, and causes three or more leaves to grow from each node rather than the usual two. Along with the extra leaf or leaves, an extra branch is also generated at each node, meaning that plants with whorled phyllotaxy often grow extra bushy!

Whorled phyllotaxy is pretty and may lead to somewhat greater yields, but is generally considered relatively useless to breeders as the trait usually disappears with any efforts to develop true-breeding strains. 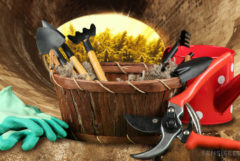 The ‘Ducksfoot’ is a variety of cannabis that has extremely wide, webbed leaves reminiscent of the webs between the toes of a duck’s foot, hence its delightfully descriptive name! During the vegetative period, Ducksfoot (as well as the many crosses it has spawned) looks practically nothing like a cannabis plant, and even in full flower, its appearance and smell are highly deceptive.

Leaf-webbing is considered a useful mutation, as it can successfully be developed into true-breeding strains that are advantageous to growers that wish to disguise their crop, without sacrificing potency.

The creeper phenotype is a strange mutation that is generally found in tropical strains, which often grow extremely large, in very humid conditions. Rather than focussing their energy on producing a large central cola, some of these tropical strains grow such large and heavy lower branches that they can bow down to touch the ground. At that point, the branches continue to grow along the ground. In common with many other plants, it may even form new root sites where the underside of the stem touches the ground!

The creeper phenotype has the potential to be useful, as it somewhat disguises the plant, and may also confer some extra vigour via extra rooting sites. However, this phenotype appears to be rare, and has not been developed into any known strains.

This rare and unusual mutation was, according to internet-forum wisdom, first found in the countryside near Sydney, Australia in the 1970s or ‘80s, where it was known as cannabis australis (not a proper botanical name) or Bindi Buds. About as unlike a regular cannabis plant as a mutant can ever be, this strange anomaly grows more like a shrub than a classic Christmas tree shape, and its leaves are non-serrated, smooth and shiny like those of a succulent, with each leaflet reaching no more than 5cm in length.

The unusual leaf shape is associated with improved hardiness and cold tolerance, making it well adapted to its territorial range in southern New South Wales and Victoria, both of which are among the cooler parts of Australia.

When the plant was introduced to the rest of the world in the 1990s it was dubbed Australian Bastard Cannabis, or ABC for short.

The original ABC was low in cannabinoids, but some underground breeders who experimented with the strain managed to produce plants that looked like the ABC but had significantly greater THC levels.

The ABC made ripples in growing circles when it first appeared around a decade ago, but despite initial promise with breeding programs, it appears that no strains have been made commercially available. The challenge for breeders is that the characteristic leaf shape was found to be highly recessive, and therefore hard to pass on to its progeny.  The hardiness and cold tolerance of the ABC was, however, evident in the crosses.

This is where things start to get a little murky. Several of the underground breeders who experimented with the ABC genetic reported producing crosses that actually had vine-like characteristics, including the ability to form stems that wrap in a spiral pattern around each other.

This mutation appears to be extremely rare, and does not seem to have been noted beyond these few anomalous experiments. Beyond its rarity and extremely unusual appearance, the vine characteristic does not appear to be highly advantageous, and no commercial strains have ever been developed.

Typically, flower sites on cannabis plants occur at the nodes, at the same point that the petioles (stalks of leaves) originate from. However, a relatively common mutation can cause buds to form at the other end of the petiole, at the base of the leaves themselves. This is sometimes called a piggyback mutation.

This mutation is unusual and interesting in appearance, and is often thought to be advantageous due to the extra bud sites. However, in reality it is probably better to remove these leaves as soon as they are observed, as buds yielded from these sites are usually tiny, and take up nutrients that could be put towards developing your main flower sites.

Polyploids are individual organisms that possess a greater number of of chromosomes than is normal for the species they belong to. Polyploidism underlies the phenomenon of hybrid vigour, where crosses of two closely related species display higher yields and improved resistance to drought or disease.  For example, durum wheat (used to make pasta) is a polyploid form of wheat created via an inter-species cross of two grasses with the typical chromosome count.

Cannabis is a diploid plant, with two sets of chromosomes. Rare instances of spontaneous polyploidism can occur if the normal process of cell division malfunctions during development, and it can be also be induced in plants that would otherwise develop normally by treatment with a powerful mutagenic chemical called colchicine. Colchicone is highly toxic and should only be handled by those who understand the risks and know how to mitigate them!

Polyploidism has been widely exploited in fruit and vegetable growing, and two potential applications of polyploidism in cannabis have been investigated: tetraploids for increased yield and potency and triploids for seedless buds.

Tetraploid plants (with four sets of chromosomes) have the potential to increase yield and potency. This has been investigated by Buddha Seeds and reported in the International Cannagraphic Magazine forums. Disappointingly, no compelling advantages of the tetraploid plants over the diploid versions were observed. This is not the only study to question the received wisdom that tetraploid plants are more potent than duploids: a study of polyploidism in hemp found that tetraploids had more protein, starch and flavonoids than diploids, but less THC.

If a tetraploid plant is crossed with a diploid plant, the offspring are triploid (3 sets), and should be infertile and seedless, opening up the exciting possibility of producing sensimillia in mixed fields of males and females.  In the case of cannabis, triploids did exhibit reduced amounts of seeds compared to diploids, but fell far short of the absolute seedlessness required for sensimilla production.

In stringy cannabis the calyxes grow all along branch rather than  in clusters.  Such plants yield less and can be a pain to harvest, but they can be very potent. Dr Grinspoon, the heirloom sativa strain named after Lester Grinspoon, author of the ground-breaking 1970s book ‘Marihuana Reconsidered’, is an example of a strain that exhibits stringy buds as its usual growth pattern.

The “stringy” tendency appears to be present mainly in intensively-bred sativa lines of Southeast Asian or South American background. Stringy strains take a long time to flower, exhibit a high degree of hermaphroditism, and yield very little – but their unique appearance, aroma and effects have won them many fans nonetheless.

Another common mutation found in cannabis is polyembryonic seeds. Polyembryonic seeds contain more one seedling, and when germinated, will surprise their owners by putting out two taproots instead of one.

If carefully handled, it should be possible to remove the seed casing after a day or two and gently separate the two seedlings. Once separated, the two seedlings should happily grow into two healthy plants—and interestingly, while one of the two plants will be the normal offspring of its mother and father, the other will be a clone of its mother.

Although two seedlings are more common, some three-seedling polyembryonic seeds have also been observed. However, while this is an interesting mutation, it does not confer much advantage to the breeder, and apparently no effort has been made to develop a true-breeding polyembryonic strain.

Arguably one of the most beautiful spontaneous mutations to occur in any plant, variegation occurs when some of the genes that control production of chlorophyll and other pigments do not express correctly, causing distinctive patterns of pigmented and non-pigmented sections on leaves and buds.

In some extreme cases, the genes that control production of chlorophyll may all be switched-off, and the plant will be entirely albino. However, plants that require photosynthesis to live cannot survive and reach full maturity if they are albino, as chlorophyll is required for the photosynthesis reaction.

Variegation is pretty, but is generally considered useless or even detrimental, as it reduces the plant’s capacity to photosynthesize and thus comprises its ability to achieve maximum health and yield.

However, there is some indication that the white flower tips commonly expressed during high-intensity LED cultivation may arise due to genetic mechanisms. Testing on these white tips has reportedly demonstrated above-average cannabinoid and terpene levels compared to normal parts of the same plant – so white flower tissue may not be so detrimental after all! Of course, we need to conduct more studies and tests to ascertain the exact nature of the relationship between high light levels, genetics and variegation.

We hope you have enjoyed this selection of unusual cannabis mutations—and if you encounter your own examples of these or other mutations, please let us know all about it in the comments section below!

This article was updated with the contributions of independent scientist Dr Gavin Macfie, to ensure accuracy and academic rigour.