There’s a lot we don’t know about the evolution of cannabis, and we’re still not sure exactly what’s going on with cannabis as it exists today – is it one species or several? What does “sativa” and “indica” mean in real terms? We’re still finding the answers to those questions, and a deeper understanding of the past could help our efforts enormously.

One thing scientists are fairly certain about is that the Cannabis genus originated somewhere in Central Asia, before spreading out and diversifying all over the planet. They’re also pretty sure that humans had encountered cannabis by the end of the last glacial period, just under 12,000 years ago.

Prior to that, the picture becomes much more blurry. So let’s take a look at what we do know about the evolution of cannabis, starting right back at the beginning.

The evolution of plants of land

It is thought that the plant, animal and fungi kingdoms diverged from each other approximately 1.6 billion years ago. At that time, representatives of each kingdom were simple, aquatic organisms such as algae and amoebae.

Around 500 million years ago (Ma), land plants evolved from mats of algae that had adapted to colonise rocks. At first, these land plants were simple mosses, without true roots, leaves or seeds. Over time, the decay of these early plants contributed to the development of soil capable of supporting more complex organisms. By around 350 Ma, forests of ferns and conifers (gymnosperms) covered great swathes of land.

Flowering plants (angiosperms) like cannabis are the youngest of the four main groups of land plants. They are thought to have appeared around 130 Ma during the Cretaceous period – sharing the earth at the time with Tyrannosaurus rex and Triceratops, with Stegosaurus and Diplodocus already long extinct!

Since then, the angiosperms have diversified into almost 350,000 different species, which makes theirs the most diverse and abundant group by far. Angiosperms make up almost every crop utilised in agriculture. 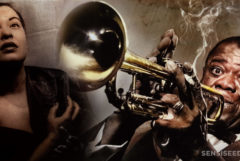 Vipers, Muggles, and The Evolution of Jazz

When did the cannabaceae family evolve?

It is thought that the Cannabaceae family, which is named for its most famous member cannabis, evolved around 60 Ma, based on genetic testing and comparison to related groups of plants such as Moraceae, the mulberry family. The excellent work Cannabis: Evolution and Ethnobotany (Clarke & Merlin, 2013) states that Cannabis diverged first, and Humulus (the hop family) then diverged from Cannabaceae around 22 Ma. Furthermore, research by GW Pharmaceuticals suggests that Cannabis diverged from Humulus around 28 Ma.

Leaf fossils strongly resembling modern cannabis and dated as far back as 38 million years ago have reportedly been found in central Kazakhstan, which may mean that the date of divergence was further back in time. Undoubtedly, future genetic studies will shed further light on this.

So what did the immediate ancestors of the cannabis plant look like? Although we do not have much evidence, we can look at characteristics shared by its closest modern relatives to get some idea.

5 similarities between cannabis and hops

Of all species that exist on the planet today, cannabis is thought to be most closely related to hops. Cannabis is the only member of its genus, which is also called Cannabis. There are three hop species, which are the only species in the Humulus genus. Cannabis and Humulus share several common characteristics:

4 differences between cannabis and hops 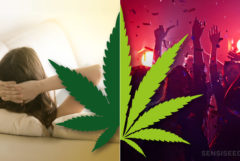 What did the ancestor of cannabis and hops look like?

Therefore, the common ancestor of modern hops and cannabis is likely to have been a species with high terpene production; toothed, palmately-lobed leaves; dioecious reproduction with monoecious tendencies; achenes; separate clusters of male and female flowers, and female flowers with large bracts.

Whether this plant was a shrub like cannabis or a twining plant like hops is not clear, but as there are apparently no other examples of climbing traits in other Cannabaceae species, it is likely that hops evolved in bines (twining plants similar to vines) sometime after the two lineages diverged. Cannabis is said to occasionally express vine-like tendencies, but reports are anecdotal, and it seems more likely that the common ancestor was an erect plant like cannabis.

What happened after the cannabis lineage split off?

If the Cannabis and Humulus genera diverged 28 million years ago, then the cannabis plant had almost that entire time to evolve before the Homo genus even appeared on the scene (around 2.8 Ma), and another million years or more before the first Homo species (H. erectus) reached Asia. During that time, fundamental changes in climate and atmospheric conditions would have caused corresponding changes in plant habitats, forcing plants to adapt rapidly to survive.

For over 25 million years of its evolution, cannabis enjoyed a “greenhouse earth” climate in which temperatures and carbon dioxide levels were high, and the world had no glacial cover at all. During this time, the plant spread throughout much of the plains and hills of Central Asia, possibly extending to Southeast Asia and even parts of Europe.

However, global temperatures and CO2 levels were slowly cooling down throughout that time; such climate cycles have occurred throughout Earth’s history. Then in around 2.6 Ma, the planet was tipped into a new ice age that has continued right up to the present day (what we’re in right now is an interglacial – a short period of warmth in between much colder periods).

At this point, vast swathes of the planet iced over. Continental glaciers (vast ice sheets that cover entire land masses all the way to sea level) stretched as far as 40 degrees latitude from the poles, and thousands of plant and animal species went extinct, or were pushed into “refuges” that provided favourable enough conditions for survival.

How cannabis survived the Ice Age

The Cannabis genus was lucky enough to survive, and it is thought that it did so by occupying various refuges in Central and Southern Asia. There is little doubt among scientists that this period would have seen some of the most dramatic evolutionary change within the genus, as it rushed to produce genotypes that would survive in a radically different set of habitats. It is thought that the adaptations that led to the development of “sativa”, “indica” and “ruderalis” biotypes is likely to have occurred during this time.

It is also believed that during this time, the cannabis plant gained the ability to produce THC, due to a mutation in the cannabinoid synthase gene. Thus, by the time cannabis began to split off into the types that we know today, it already had the ability to produce THC. The evolutionary pressures acting on it since then, both human and environmental, have influenced how much THC the various populations produce.

The evolution of “sativa”, “indica” and “ruderalis”

It’s safe to assume that cannabis maintained parts of its habitat range in Central Asia by the time the ice age began, as genetic analysis has shown that the most diverse wild gene pool still persists in parts of Kazakhstan, Afghanistan and western China.

However, certain isolated populations developed traits that set them apart from that main gene pool, giving scientists today the task of working out whether these differences are enough to qualify them as separate species.

Some researchers believe that the Cannabis genus is comprised of three species and various subspecies. This is the view held by Clarke & Merlin in Cannabis: Evolution & Ethnobotany. The other school of thought holds that Cannabis is just one species, which expresses a wide range of traits according to its environment. This range of regional traits gives us the concepts of “sativa”, “indica” and “ruderalis”, but are not quite as conventional wisdom holds.

In the valleys and foothills of northern India and Pakistan, the type we know informally as “indica” emerged. This type is aggressively seasonal, as it’s adapted to a climate with long, bright summer days and freezing winters. It may also be the main “drug” biotype, and the high-THC strains we think of as “sativas” may in fact derive from narrow-leaved subtypes of “indica”.

Cannabis also spread and established separate populations further south and west, in the desert steppes of Afghanistan and Turkestan. As it did so, it got bigger, its flowers got looser and more mould-resistant, in response to higher temperatures and humidity. The type we think of as “indica” may actually be more properly known as Cannabis afghanica.

In Central and Northern Asia, the C. ruderalis type (with its small stature, low resin production, and ability to flower according to age) became established, as a response to cold temperatures and low light conditions.

In other parts of Asia, and also parts of Europe, types evolved that are more similar to what we know as hemp today. These types were also adapted for cool temperatures, but not as extensively as ruderalis. They still flower according to season, but do not produce large quantities of cannabinoids. European hemp is actually C. sativa, while some hemp populations in Asia derive from C. indica.

How humans assisted the evolution of cannabis

The Cannabis genus has so much phenotypic plasticity (ability to produce diverse variations in phenotype) that there are certainly some fundamental differences between the biotypes. Furthermore, during the last two million years or so of rapid evolution, the biotypes would also have been assisted in their adaptive path by humans, and possibly even by earlier Homo species like H. erectus.

Indeed, human selective breeding over the past 12,000 years or so may have been the primary selection pressure on the evolution of cannabis varieties since the last glacial period ended. We are certainly the reason that cannabis now enjoys the vast global range that it has today.

5 thoughts on “The Evolution of Cannabis Sativa & the Cannabis Ancestor”