Cannabis cultivators go to great lengths to avoid being detected, which results in some bizarre grow locations! Check our top 10 to read more about underground grow rooms that were discovered in bizarre places such as a church, a nuclear bunker, and even right next to a police station!

Due to the absurd and draconian policies still inflicted on populations by governments the world over, people will go to extraordinary lengths to grow weed and avoid detection. Here, we list our ten favourite examples of weird and wonderful grow room locations:

1. In an underground trailer complex

Burying grow ops in underground trailers is not exactly unheard-of, but what makes this case special is the wonderful creativity of the guys running the show.

In January 2015, two British men were arrested in connection with a large cannabis grow discovered in a remote field in the English county of Somerset, otherwise best known for cider and incomprehensibly bucolic accents.

The grow was located in a grand total of four buried shipping containers, all connected by a complex system of tunnels, and accessed by a trapdoor cut into the floor of a caravan!

2. At a sewage works

There have been at least two cases of hidden illegal cannabis grows discovered at sewage treatment plants in the UK.

Sadly, it seems that masking the smell was not enough to avoid detection for long enough to harvest!

3. In a swimming pool

Although Florida is slowly starting to legalise cannabis, they didn’t until 2016. In general, this state is a right-leaning one that used to have intense disdain for the idea of drug liberation. At the same time, Florida has always had a wild party scene and a lot of people with a lot of disposable cash. Thus, cannabis grows are everywhere, and in January 2014 Miami-Dade police found one in a disused swimming pool! Chlorine-full chlorophyll doesn’t sound too appealing, though, so let’s hope the trend doesn’t catch on…

4. In a stately home

These guys apparently mistook the saying “grow big or go home” for “grow big in huge homes” when they opted to repurpose a Grade-II listed mansion in Cumbria, northern England into a grow operation estimated by local police to be worth €7.1 million.

You’d think that a mansion wouldn’t be the most inconspicuous choice for a hidden cannabis operation. But they hid it well enough to produce a total of 263.25kg of cannabis in just one year – until the police discovered them, of course.

Officially, this shady set-up in a railway tunnel in Bangor, Wales was a mushroom-growing operation, but when police looked behind the multiple sets of huge steel doors safeguarding the premises, they found something considerably greener, smellier and more profitable than even the finest morels or truffles. Four large rooms had been given over to the underground cultivation of cannabis, in an operation estimated to be worth up to €2.7 million annually!

In a bid to produce some truly holy smoke, as-yet-unidentified personages were reported to have repurposed a small community church in Escazú, Costa Rica as a grow room containing 226 plants and 8kg of dried cannabis.

The Public Security Ministry (MSP) reportedly “didn’t speculate on whether the marijuana might have some spiritual significance, but the discovery of a small .38 Special revolver by police doesn’t bode well for the religious freedom angle”!

7. In a Cold War-era nuclear bunker

During the Cold War, Drakelow Tunnels—an extensive tunnel system first built as a factory during the WW2 years—was developed into a top-secret nuclear bunker designed to shelter and protect members of the regional government in the event of a nuclear bombardment, a move that caused widespread controversy and protests when it was discovered by the local population.

In 2013, it was the scene of further controversy when it was found to be the site of a large illicit grow comprising upwards of 400 plants, with an estimated street value of €885,000! This takes “underground” growing to a whole new level.

8. Next door to a police station

In a case whose perpetrators were as foolish as they were audacious, police last month discovered a grow operation comprising 146 mature plants and an unspecified quantity of harvested and drying cannabis.

It is not clear what tipped police off to the presence of the hidden grow room, but they obviously managed to complete at least one harvest before being caught!

9. In a botanical garden

In 2008, police were called to the Matthaei Botanical Garden at the University of Michigan for what might possibly be the most ridiculous reason in the entire history of police call-outs: plants were found growing in a botanical garden.

Of course, these plants (of which there were just eleven, and apparently “very small”) were none other than our best friend, the insidious devil weed! It is not known whether a student in the Advanced Botany Class that meets there each week was responsible; to their credit, police did not appear too interested in pursuing any leads.

Hidden cannabis plants in a botanical garden? That’s the work of a camouflage genius. 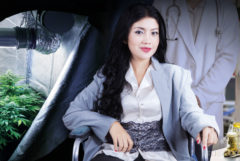 How to Build the Best Basic Indoor Grow Setup

This may just top the list of unusual underground sites for grow rooms. In Tennessee, just outside Nashville, a truly epic grow set-up was discovered by police in 2005, and it is thought that the operation ran for several years before it was finally detected.

Following a tip-off from the electric company that the local grid was experiencing a mysterious drain on energy, police raided a typical A-frame style family house and discovered a passageway leading down to a 75-metre natural cave, which had been expertly modified to house up to 1,000 cannabis plants measuring up to 1.8 metres in height!