Can You Treat Coughs and Colds with Cannabis?

During winter, coughs and colds are something most of us deal with. Although the simple, ubiquitous viruses that cause these common illnesses are hard to “cure” outright, there are various ways that cannabis can be used to ease their symptoms. We will discuss how to incorporate cannabis into your diet and health care regime to prevent and treat colds.

The common cold is a viral, highly contagious illness that is more likely to affect people during the winter months. Responsible for a range of symptoms including dry or chesty cough, runny or congested nose, sore throat, fever and fatigue, the common cold is not caused by just one virus. Instead, it is associated with as many as 200 different viruses.

One type of virus particularly associated with the common cold is the rhinovirus (with “rhino” meaning “nose”, this literally just means “nose-virus”!), which can be the culprit for up to 40% of colds There are three main species of rhinovirus and at least 99 different serotypes (strains). As well as rhinovirus, the common cold is also associated with various strains of coronavirus, adenovirus, enterovirus and influenza virus.

How do cold viruses cause symptoms?

Cold viruses are passed from person to person by hand-to-hand and hand-to-surface contact, as well as airborne transmission of viral particles. Hence, it is important to cover the mouth or nose while coughing or sneezing, and to wash hands regularly!

Once a cold virus has infected a human host, it gets to work – infiltrating the mucous membranes of the nose, mouth, throat and reproducing rapidly. For the most part, cold viruses such as rhinovirus don’t cause any particular damage to the body – they simply cause an immune response as the body recognises unwanted invaders exploiting its resources.

But for immunocompromised people or individuals suffering from asthma or COPD, catching a cold can be seriously bad news.

Many rhinovirus serotypes bind to an immune protein known as intercellular adhesion molecule 1 (ICAM-1). This protein is present on the outer cell membrane of certain epithelial cells (which make up the upper layer of the mucous membranes). The rhinovirus essentially hijacks it to gain entry to the interior of the cell. Once the virus has gained entry to its first host cell, it can take control of the cell and hijack its reproductive system in order to reproduce itself. (Yikes!)

Usually, ICAM-1 helps cells adhere (stick together), particularly after injury or stress. But when it gets hijacked by the rhinovirus, it sparks off a release of pro-inflammatory cytokines (cell signalling proteins), which leads to inflammation of the mucous membranes of the throat and nose.

This inflammatory response is key to the congested and sore feeling associated with having a cold. For most people, that’s pretty much the worst of it – but it can lead to severe complications, including pneumonia, for certain people.

The endocannabinoid system is now well-known to be deeply involved with the immune system and cannabinoids have been repeatedly demonstrated to cause complex immunological effects. But when it comes to ICAM-1, there is sparse research available, and apparently nothing on the direct relationship between cannabinoids, ICAM-1 and rhinovirus.

There is evidence that cannabinoids can influence ICAM-1 expression levels in certain situations, though. One study reveals that CBD and THC can both cause increased expression of ICAM-1 on certain lung cancer cells, which leads to an increased rate of cell “lysis” (cell death via disintegration of the membrane).

For example, the synthetic cannabinoid R(+)WIN 55,212-2 may indirectly block the expression of ICAM-1 by blocking the activity of interleukin-1, another important immunological protein. This particular study investigated multiple sclerosis and how cannabinoids can help slow its progression – and intriguingly, there is a growing body of evidence suggesting that rhinovirus could be instrumental in the pathogenesis (development) of MS.

Clearly, there is still much to learn about the transmission and pathology of the rhinovirus and other types of common cold virus – as well as how all this relates to chronic autoimmune disorders like MS. But it’s clear that the endocannabinoid system is fundamentally involved. There may be potential for certain cannabinoids to help prevent the transmission of rhinoviruses in certain situations by reducing the expression of ICAM-1.

So how can cannabinoids help treat coughs and colds?

Despite all our best efforts, and no matter how healthy we are, it is almost inevitable that sooner or later one of those 200 viruses is going to overcome our body’s defence systems and cause a cold or cough. When that happens, there’s not a whole lot that can be done to actually cure the illness – cold viruses are so numerous and so quick to mutate that developing effective antivirals and vaccines is all but impossible.

So when we catch a cold, it is pretty much inevitable that we will have to let the virus run its course and that we will feel significantly subpar for several days. But there are various ways we can ease the symptoms of colds and coughs. For example:

Of course, you probably already know that… But what about cannabis? There’s plenty of evidence that various compounds in cannabis have anti-inflammatory and analgesic effects. THC, CBD, CBC and CBG are all known to exert. There are also plenty of terpenes and terpenoids in cannabis with similar properties, such as linalool, limonene and eucalyptol.

Various cannabinoids and terpenoids are even known for their relaxing, anti-anxiety or sedative effects. During times of illness, such properties may be very useful in increasing subjective feelings of wellbeing. And as what some might consider a bonus? Common colds can also cause appetite loss in some people and THC in particular has been repeatedly demonstrated to have appetite-stimulating properties.

How to use cannabis during a cold

When we catch a cold, we are likely to experience nasal congestion and sinus pain, sore throat, dry or chesty cough and irritated watery eyes – None of these symptoms are improved by smoking of any substance. Even vaping or dabbing will probably exacerbate sore throats and coughs – even if these methods are usually not as hot or as harsh as smoking itself.

For this reason, it’s best to stick to edibles, topicals and anything else that doesn’t cause irritation to the throat and lungs. Hard candies infused with CBD or THC can help soothe throat inflammation and soreness. At least one US company, Jolly Meds, offers THC-CBD lozenges with added menthol and eucalyptus oils to enhance their soothing and decongestant effects.

Another method that many people report to provide subjective relief is cannabis tea. Teas and herbal infusions can offer soothing, warming and comforting relief from cold and cough symptoms. When cannabis extracts are added, they may provide extra help in the fight against inflammation and pain.

There are many ways to make cannabis tea. The general idea though, is to ensure that at least some fat or oil is used. This will allow the cannabinoids to dissolve and infuse through the mixture. Hot water alone will not dissolve cannabinoids. Therefore, making some cannabutter or cannabis-infused milk and adding that to a hot-water infusion may yield improved results.

As well as cannabinoids themselves, various other plant compounds could provide benefits if infused into tea. For example, tea (particularly green tea) contains catechin flavonoids, which have been found to be beneficial against cold and flu viruses. 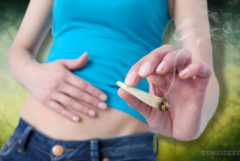 Interestingly, valuable insight into the endocannabinoid system’s response to rhinovirus comes from research into a plant that isn’t even cannabis – echinacea. This plant contains compounds known as alkylamides that bind to both the CB1 and CB2 receptors. There is even some evidence that these natural “cannabimimetic” compounds, reducing the duration of symptoms by up to four days.

Echinacea has been shown in clinical trials to significantly reduce the severity and duration of common cold symptoms. There are various compounds in the plant thought to have an effect, including cichoric acid (a natural antioxidant), various polysaccharides and alkylamides.

Echinacea’s biological activity is complex and still not fully understood. It has been shown that the active compounds within it work in ways that may be either CB receptor-dependent or independent. But what is certain is that the endocannabinoid system is fundamentally involved.

Another finding of interest? This study also suggested that root and leaf extracts, which contained different alkylamide profiles, were more effective in combination than alone. This suggests that echinacea has an “entourage effect” of its own.

Therefore, use of both cannabis and echinacea extracts can benefit people suffering from coughs and colds in various complex ways, although they still need to be fully researched.

The common cold may not generally pose a serious risk to health, but it is nonetheless responsible for up to 40% of employee absences from work due to illness in the US (and all around the world). Billions of dollars are spent each year on remedies that may provide little effectiveness or none at all. We have a lot left to learn about how these complex biological mechanisms interact and exert their effects. But as time goes on, it’s increasingly clear that we need to completely rethink plant medicine and radically reassess its potential contribution to human health.

17 thoughts on “Can You Treat Coughs and Colds with Cannabis?”