Cannabis in Angola– Laws, Use, and History

Prior to its civil war, Angolan residents often used to sell cannabis to visiting ships. The conflict in the country made drug enforcement a low priority, which meant that drug traffickers could move substances through Angola with relative ease. Now, the government is attempting to tackle the issue. Cannabis use, purchase and sale is illegal here.

Can you possess and use cannabis in Angola?

It’s illegal to possess or use cannabis in Angola. However, drug arrests are relatively infrequent.

Prison sentences and fines may be given to those who use or own any drugs in Angola. The death penalty is no longer used as punishment, as this was abolished in 1992. This is a distinct contrast to other West African countries, such as Gambia, which reintroduced the death penalty for certain drugs-related crimes in 2017.

Can you sell cannabis in Angola?

In the past, the sale and supply of cannabis wasn’t regarded as a serious issue in Angola. Before the country gained independence from Portugal in 1975, it was freely sold to visiting ships in the capital, Luanda.

In more recent years, the authorities have adopted a tougher stance; as the country has become a major transit point for drugs entering the continent from Latin America.

The authorities claim that most of the drugs seized come from Brazil – namely cities like Sao Paulo and Rio de Janeiro. Angola, like many other African nations, is seen as an easier ‘route’ to traffic drugs across the world; especially since control efforts have intensified in Europe.

In response to this, Angola’s government formally consented to abide by the UN Conventions against Illicit Traffic in Narcotic Drugs and Psychotropic Substances, against Transnational Organized Crime and for the Suppression of the Financing of Terrorism. This was to improve the country’s national security. Now, the law officially punishes the trafficking of narcotics and psychotropic substances, including cannabis.

They’ve also adopted other steps to combat traffickers. One such example was the public destruction of nearly 300 kilograms of cannabis on the International Day to Combat Drugs in 2001. The National Directorate for the Investigation and Prosecution is responsible for investigating and preventing organised crime, including drug trafficking.

If offenders are caught smuggling or supplying drugs in Angola, prison terms can be lengthy, and the country’s jails are notoriously unpleasant.

In 2010, Roekieyah Lorraine Benjamin agreed to smuggle drugs into the country, on behalf of a Brazilian cartel. She was caught, then spent the next six years in the Central Prison of Luanda.

Talking about her experiences, she commented: “There was no clean water (…) if you sat somewhere there would be heaps of dirt, they do not know of hygiene, fresh water or fresh vegetables. The water you needed to dig it out of a pit and mix it with bleach, and it would have to stand for a week before you could use it to wash yourself – you cannot drink it.”

Can you grow cannabis in Angola?

It’s illegal to grow cannabis in Angola. Despite this fact, it’s widely cultivated in almost every province of the country.

The Institute for Security Studies (ISS) states that Angola produces ‘substantial quantities’ of cannabis, and has an ideal climate for growing the plant. Although the government hasn’t gathered any data on cannabis cultivation, it’s believed that its growth is widespread across the east and north-eastern areas of the country, and the central highlands.

Interestingly, the ISS regards this as a positive thing. As South Africa (which has decriminalised recreational cannabis use) looks to expand the cannabis market in the future, it may focus its attentions on countries like Angola. By legalising its cultivation, the nation could receive the financial boost it badly needs after the turmoil of the civil war.

Is CBD legal in Angola?

CBD is not differentiated from cannabis in Angola. As such, it’s illegal to use, purchase and sell it there; even for medicinal purposes.

Can cannabis seeds be sent to Angola?

Likewise, cannabis seeds are regarded by the law as no different to the cannabis plant, and are illegal to use, buy and sell. As such, they cannot be mailed into the country.

There is no medicinal cannabis programme in place in Angola. It’s illegal to use, purchase and sell, regardless of whether it’s for medicinal or recreational purposes.

Angola doesn’t have a recognised hemp industry. However, given that some agricultural companies have grown the plant in the country for nutraceutical purposes, it seems that the law permits the cultivation of this low-THC plant.

Humberto Noguerira, a hemp advocate in Portugal who was born in Angola, recently returned to his home country to research hemp. “Due to my African origins,” he commented, “I appreciate the fact that there’s a historical record from 1942 describing the experimental cultivation of industrial hemp in Angola, using corn as a basis for comparison.”

Once again, it seems that Angola’s climate and soil offer the perfect conditions for cultivating this plant. As many other countries in the world cash in on the ‘green rush’, Angola may soon follow suit and make the most of this profit-making opportunity.

If you are travelling to Angola (or currently live there), you may be interested to know the following: 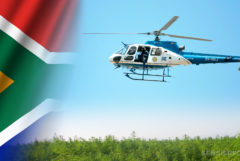 Cannabis in South Africa – Laws, Use, and History

Cannabis has been used and grown in Angola for centuries. It wasn’t originally a native plant; and it’s believed that it entered the continent at some point in the 1300s (when some smoking pipes were discovered in Ethiopia). Experts think that Arab traders brought the plant with them; or possibly even traders from Asian countries like China.

The nomadic tribes of Africa then took cannabis with them, introducing it to other parts of the continent. It’s likely that Angola first encountered it as a result of its proximity to Zambia (which is next to Malawi and Mozambique – where it’s thought that cannabis first took hold in Southern Africa).

Back then, the plant was called liamba (sometimes diamba or riamba). The word possibly derives from Portuguese. However, it may also be linked to chamba, Malawi’s word for cannabis, or may even originate from the Sanskrit word bhanga.

Historians suspect that it was the Angolan slaves who first introduced cannabis to Brazil, in the sixteenth century. They carried the plant with them, sometimes hidden in rag-dolls, when they were on board the Portuguese slave ships.

The Brazilians swiftly adopted the plant, incorporating it into their religious and recreational practices. In doing so, the plant’s influence spread even further around the globe. Indeed, most of Brazil’s modern terms for cannabis come from Angolan words.

In 1857, Livingstone noted that the Angolan slaves’ use of cannabis was “considered a crime” by Portuguese authorities.

In the early 1900s, European travellers wrote of Angola’s continued use of water-pipes (mutopa) for smoking cannabis. These were usually made using a gourd with holes bored into its top and side, to accommodate a mouthpiece and bowl. Sometimes, these water-pipes were also made from a large, hollowed-out cow horn.

However, attitudes towards cannabis in Africa (and across the world) were about to change dramatically). In 1922, South Africa prohibited the use of cannabis (dagga). While this didn’t occur in nearby Angola, it’s possible that the prohibition may have shifted public opinion towards the plant. However, cannabis was still being sold to visiting ships until as late as 1975, which demonstrates an enduring level of tolerance for the plant.

The bitter civil war, which ran almost continuously from 1975 to 2002, meant that the authorities weren’t focused on the use or sale of any drugs in the country. It’s only in recent years that efforts to address the rising problem of trafficking have increased.

Cannabis use is common in Angola. However, data suggests that the rate of usage in the nation is just 2.1%. This is far lower than the global figure of 5.8%.

Also, cocaine and alcohol are usually regarded as far more pressing issues by the authorities. As such, although it’s illegal to use cannabis, it’s not a top priority for Angola’s police force.

Trafficking is becoming a bigger problem in the country though, and the government is responding by pushing more anti-drug campaigns on the population. 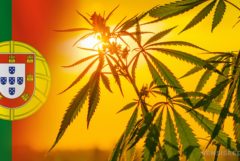 Cannabis in Portugal – Laws, Use, and History

Angola’s government hasn’t indicated that it will be legalising cannabis for medicinal or recreational purposes any time soon. At present, it remains focused on addressing its significant drug smuggling issues, and legalising the drug may be perceived as sending a conflicting message to the country’s citizens.

However, with nearby countries such as South Africa decriminalising cannabis use (and more importantly, cashing in on its financial potential), Angola’s government may have a change of heart. This poverty-stricken nation, still recovering from its lengthy civil war, may look to plants like cannabis to boost its economy.

3 thoughts on “Cannabis in Angola– Laws, Use, and History”