Cannabis in the Democratic Republic of Congo – Laws, Use, and History

The Democratic Republic of Congo is still recovering after two major wars. The country is rich in minerals, but despite that, locals turn to cannabis as a source of money rather than mining. Cannabis is less valuable than gold but easier to harvest and sell. However, it’s illegal to grow, sell or buy it in the country, which makes it a risky business.

Can you possess and use cannabis in DR Congo?

It’s illegal to use or possess cannabis in the Democratic Republic of Congo, as it is in most other African countries. Despite being officially listed as an illicit drug, it is grown widely across the country. Although prison sentences can be issued, the law is not strictly enforced, and corruption is rife.

Can you sell cannabis in DR Congo?

It’s illegal to sell, supply or traffic cannabis in the Democratic Republic of Congo. The country still has the death penalty, and although there is little information available about when it’s enforced, it’s believed that drug trafficking is regarded as a ‘death sentence’ worthy offence.

Can you grow cannabis in DR Congo?

It’s illegal to grow cannabis in the country but despite this fact, it’s widely cultivated and valued as a source of income by many farmers. Professor Ann Laudati of the University of California claims that 60% of farmers in Kivu (in eastern Congo), and as many as 90% in other locations, grow at least some cannabis among their crops. One village priest even told her that “everyone but the priest” grows it.

Cannabis cultivation is regarded as less risky than mining (DR Congo’s significant ‘finance generator’ in previous years), and more reliable, as it’s a renewable source of money. However, there are risks involved. The Congolese government have come under pressure from the US to control drug trafficking in the country, which translates into more seizures and eradication efforts.

Likewise, bribery is common. Koti, a cannabis farmer in DR Congo, reported that “a lot of the money we get, we use for bribes – soldiers, police.” He told Laudati of a time when his farm was raided, and he was jailed until he paid a bribe to be released. Additionally, the authorities kept half of his harvest.

Is CBD legal in DR Congo?

CBD is regarded the same as cannabis, and as such, is an illicit drug in DR Congo. It cannot be legally purchased, sold or used in the country.

Can cannabis seeds be sent to DR Congo?

Cannabis seeds are not differentiated from any other part of the cannabis plant, which means they are also illegal in the country. They cannot be mailed in through the post.

There is currently no medicinal programme in the Democratic Republic of Congo. Despite other African countries taking steps towards introducing cannabis for medicinal purposes, the Congolese government has made no mention of adopting a similar approach in the future.

If you are travelling to the Democratic Republic of Congo (or currently live there), you may be interested to know the following: 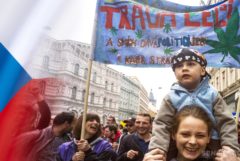 Cannabis has been used and cultivated in Africa for centuries. The earliest evidence of cannabis consumption in the continent comes from an archaeological dig in Ethiopia, when ancient smoking pipes were discovered with traces of the plant inside them. This suggests that the drug was used recreationally or for ritualistic purposes.

Given how cannabis spread through the continent after this (particularly with the migration of the Bantu people), it’s sensible to speculate that the people of Central Africa were using it too.

When the Belgian people colonised what’s now DR Congo in the 19th century, they actively encouraged cannabis use in the country. However, by the 1900s, they changed their attitude significantly, and banned the drug.

In 1961, cannabis was effectively demonised by several governments across the world. The UN subsequently passed the Single Convention on Narcotic Drugs, forbidding the trade of cannabis across the world. DR Congo still adheres to this stance, despite some other African nations legalising the drug for medicinal and even decriminalising recreational use.

More recently, significant immigration (as a result of wars in Rwanda, Burundi, Sudan and Angola) has meant that many newcomers to the country have brought their cannabis practises with them. The most notable is perhaps the Rastafarian population in Kinshasa, who use the plant for religious purposes.

The Pygmy people and cannabis

The indigenous forest people of DR Congo (known locally as pygmies) are largely marginalised by the rest of the country’s population. A recent study revealed that, in an already impoverished country, many Pygmy people were surviving on barely $1 a day (the average in DR Congo is $2, which is still extremely low).

Unsurprisingly, they’ve turned to cannabis in order to generate a better income. Some choose to grow the plant in the forest regions they used to live in, before they were moved on to other locations.

Mubawa, a 36-year-old chief of a pygmy village, states to the National Geographic that “nobody could break our traditions” when they lived in Virunga National Park. They, like 20 million other indigenous people worldwide, have been displaced as a result of conservation efforts. Mubawa and the other villagers regularly journey into the forest to forage for cannabis, despite the risk of being killed by Virunga’s park rangers.

Depending on how much they grow, most pygmy families can make between $8 and $100 a week from growing cannabis. What isn’t sold is used in traditional medicine, to cure stomach aches, induce appetite and treat coughs, among other things.

There’s some negativity surrounding cannabis in DR Congo. Still according to Professor Ann Laudati, many people believe the widespread misconception that cannabis consumption leads to violence, and even murder.

She comments: “The narrative is, ‘you get drugged up and drugs lead to rape by soldiers or rebels’. According to these narratives, cannabis presents the stimulus for armed actors to engage in violent acts, notably rape and the murder of one’s family members.” The media has fuelled this narrative.

A further example is in a report published by Amnesty International in 2003. A 15-year-old recruited as a soldier by the Eastern Congolese military forces explained that to “toughen us up” they were given ‘chanvre’ (the local name for cannabis) then forced to kill people.

“Before killing,” he said, “you first have to smoke some chanvre – when you do that, it stops the spirit of the person you’ve killed from entering inside you.” However, it’s evident that psychological manipulation is at fault here, not cannabis itself.

Despite these negative attitudes, it’s still commonly consumed in the country. A US International Narcotics Control Strategy report stated that “marijuana is widely used” in DR Congo, and that “Congolese authorities believe that the use of marijuana…has increased steadily over past years.”

Indeed, there’s a counter-narrative rising against the ‘cannabis leads to violence’ suggestion – with some Congolese people claiming that using the drug gives them more strength while working.

DR Congo’s vast mineral wealth is estimated to be worth over $24 trillion. However, continued political instability and lack of infrastructure has prevented its people from profiting from it. As such, the people of the country have turned to another source of money – growing cannabis.

Cannabis is popular with farmers, as it grows easily, can be transported quickly, and initiating its cultivation doesn’t require much collateral. It’s grown across the country, though the main cultivation areas are the provinces of Kasai, Bandundu and Lower Congo. Due to the lack of available data, it’s impossible to say how many acres are devoted to cannabis growth, though it’s certainly a sizeable area.

Trafficking is a major issue for Congolese authorities. Cannabis and other drugs are smuggled through the country’s porous borders to places like Rwanda, Angola and Uganda. Major smuggling points are Ndjili International Airport in Kinshasa, and the seaport at Matadi. In addition to being trafficked to Africa, the drugs are also distributed to various European countries.

Other African nations are gradually moving towards legalising cannabis. South Africa is one of the few nations in the world where recreational cannabis use has been decriminalised, and Lesotho has legalised cultivation for medicinal purposes.

However, DR Congo’s troubled past has left it impoverished and vulnerable to trafficking. Continued pressure from other countries like the US to control the problem means that the government are unlikely to legalise cannabis any time soon.

3 thoughts on “Cannabis in the Democratic Republic of Congo – Laws, Use, and History”